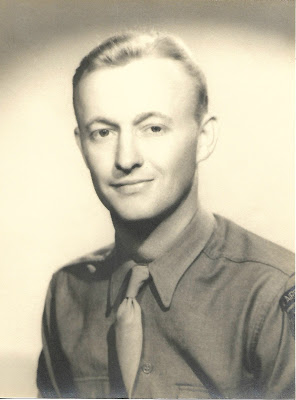 My late maternal grandfather, David Lewis Stokes from Lexington, North Carolina.  He was drafted/conscripted very quickly after the Japanese attack on Pearl Harbor in December 1941 and spent the war years as first an anti-aircraft gunner guarding the Dutch refineries at Curacao, then glider infantry, and later a paratrooper in France.

As an interesting aside, the unit in which he first served had been a Pennsylvania National Guard unit, in which many of the men, privately at least, still spoke Pennsylvania German. having grown up at a time and in homes where that was usual in the southeastern and central parts of the state.

Kind of a strange irony in that, given the combatants in 1939-45, but there were certainly also other large pockets of German speakers  here in the U.S. too, the Chicago, Milwaukee, and Saint Louis areas among others for example.  Indeed, one of my grandfather's aunts, Aunt Maggie (Margarethe) still spoke German at home to the children in rural North Carolina during the 1920s and 30s according to family lore shared with me as a child.  I think the war finally put a stop to that however.

How Granddaddy, his two brothers (Uncle Jack and Uncle Baxter), and three brothers-in-law (Uncle Syd, Uncle Bob, and Uncle Charlie) all managed to survive and return home relatively unscathed to lead productive lives, I'll never know.  They certainly endured various hardships (for want of a better term) that go with being military personnel in wartime.

I knew them well and and miss them all.  They answered the call without complaint and carried out things I cannot even fathom doing myself.  The greatest generation indeed.