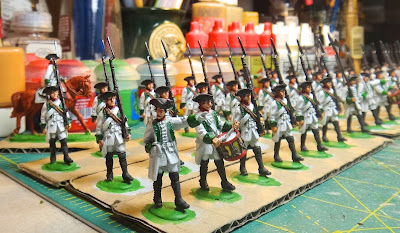 Still plugging away at the 60 or so Wied Infantry currently on the painting bench as and when work and family life permit. Using three different whites for the clothing, shoulder belts, and officers' wigs plus trying some Army Painter quick washes.

My friend and one-time online magazine co-editor Greg Horne (the man behind The Duchy of Alzheim, still one of my blog and hobby touchstones) suggested I give washes a try a month or two ago, and I think he might be onto something.  Admittedly, he suggested the Citadel contrast range, but what I purchased eventually is in that general direction.

I am especially pleased with the Army Painter flesh wash, which picks out the facial details on the Minden figures very nicely.  I've applied it on top of my usual Windsor & Newton alkyd oil fleshtone and then highlighted the brows, bridges of noses, cheeks, chins, lower lips, and knuckles/thumbs the next day with more of the fleshtone.

Suddenly, and with relative ease, my painting has moved to the next level I'd like to think.  You can see the facial features of each casting.  Huzzah!

In any case, the wash also gives a lovely rich quality to the flesh areas that was absent before when I used only the basic fleshtone.  Eager to try out some of the other washes, which I'll have a chance to do before long, since the next two infantry 60-figure regiments I envision will be blue-coated Reichsarmee infantry.  With some lovely flags recently designed by David of the Not By Appointmet blog, which has developed into a wonderful uniform and flag resource during the last 15 years or so.

But in the shorter term, let's get these Austrians finished first, eh Stokes?

MSFoy said…
Lovely figures, Stokes - and I am impressed by the benefits of washing the lads' faces. I am very timid about washes and inks; I had a fairly disastrous experience a few years ago when a wash lifted with the application of the acrylic varnish, and spread itself around in a disappointing manner.

WSTKS-FM Worldwide said…
Indeed, I do Foy. Indeed, I do. I too have resisted the pre-mixed washes for a long time, but curiosity finally go the better of me. It is nice when something worls like it should. I've got a squadron of my son's Russian dragoons next in the painting queue, and I'm eager to see how the blue wash works on those given the generally lighter blue of those particular uniforms. I hope to get these painted by Christmas morning for him.

David said…
Very nice work, Stokes. They are coming on a treat! Naturally I am also impatient to see them get their flags... ;-)

I very much look forward to seeing your Reichsarmee troops too; thanks for the mention of the flags. I am really keen to see some of them in action!

WSTKS-FM Worldwide said…
Thank you, David! Stay tuned over the next year or so. I feel really inspired to get these Austrians finished and crack on, as you say, with the Reichsarmee units.