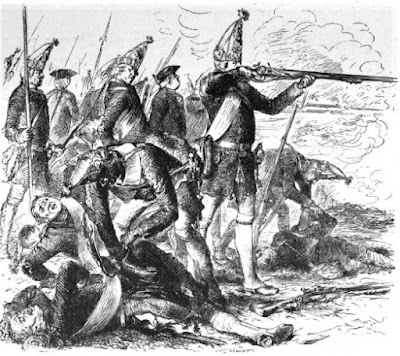 Checking unit morale is a process that we try to keep fairly fluid and simple in A Tangled Mass.  For us, it involves two steps, but readers are invited to streamline or change anything that does not quite mesh with their particular understanding of horse and musket warfare during the mid-18th century.

Here is how the Young Master and I do it at present.

Once a unit receives orders and is set into action, it gets a green bingo chip, which signifies that the unit is 'Following Orders, Steady, and Holding' (or 'Holding Steady and Following Orders' if you prefer).  It may proceed and/or continue acting in accordance with player instructions, issued in our tabletop general guise.

Players check unit morale at their discretion.  At the very least, we suggest doing so after approximately 25-30% casualties have been suffered; before or after close combat; when surprised or shocked; attacked in flank or rear, etc.  Use or modify this list as you see fit of course, depending on your own requirements.

Players should feel free to check unit morale -- either their own, or suggest their opponent check his or her units' morale -- at any point within reason during a game.  But do resist the urge to get carried away!   Maintaining forward momentum in our games is a useful thing when it comes to having fun with shiny toy soldiers.

For whichever reason players might choose to check morale when playing A Tangled Mass, units pass their morale checks with the following rolls:

D – Below average line from minor combatants (and lesser Reichsarmee units); some Frei-battalions, etc. pass with 5, 6.

If a unit passes its morale check, players are finished and can continue their game with the unit in question continuing to perform as ordered/expected.  If, on the other hand, a unit does not pass its morale check, continue with the second part of the process below to determine what happens next.  How will a unit that fails its morale check react under mounting pressure from the enemy and gradual erosion of their will to fight?

Roll another D6 to determine how the unit in question reacts if it fails its morale check as outlined above. Additional colored bingo chips help players keep track at a glance of resulting unit behavior in the heat of tabletop battle without over reliance on paperwork.

6 or 5 = 'Under Pressure and Hesitating' (Yellow).  Unit remains in position but halts all action for one turn.

4 = 'Shaken' (Orange).  Unit retires one normal move distance to rear but still facing enemy and in control of officers and NCOs.  One inactive turn required for officers and NCOs to steady the unit and move it forward to its former position.

3 = 'Fatigued and Wavering' (Light Red)  Unit falls back at the double one charge move to rear.  Officers and NCOs maintain some control but require two inactive turns to restore order before it can return to its position in the line.  -1 per D6 if attacked during this time.

2 = 'Exhausted and Breaking' (Dark Red).  Unit routs two charge moves to rear.  Officers and NCOs have lost control.  A mounted general -- in base-to-base contact -- is needed to rally the unit and lead it back to the fight.  It is considered 'permanently shaken' thereafter with -1 per D6.  If the mounted general is not swept away and succeeds with his admonitions, the unit may return with him to the line and defend if attacked, but no other offensive behaviors are permitted.  A Tangled Mass is intended as a game for gentlefolk after all.

1 = 'Shattered' (Black).  Unit is destroyed, totally spent, and reduced to a panicked mob that flees two charge moves toward nearest table edge.  Remnants of unit are removed from the game.  -2 per D6 if pursued during flight

So, there we are.  As with so much else, and to invoke the late Donald Featherstone yet again, if something presented here does not mesh with your understanding of history and/or gaming wishes, change it.  But as we were saying. . .

This is where our morale rules stand at the moment.  We've gradually simplified them over the last couple of years.  Please take liberty to add to, delete, or ignore whatever you agree or disagree with here.  Of course our particular approach is 'gamey,' but we like the cheery bit of added color that the plastic Bingo chips bring to our games.

There is a just bit more to our approach to unit morale, which we will share in a later post, but basically this is it.  We find the steps above are simple enough to commit to memory after a few games around the table, enabling us to get on with things in fairly short order without our games bogging down.

tradgardmastare said…
An elegant system and one which I think I will adopt at some future point. Thanks for sharing your system with us. I was playing a biggish ACW game on Friday and going through the morale factors systematically took for ever. I find l remember some but forget others as I attempt to hold the information in my head. As much as I enjoy a good morale table ( probably as a result of playing too many WRG ancient battles in my formative years) l tend now to be looking for a more streamlined approach. Age has nothing to do with it, not.
2:05 AM

March 16, 2022
A nd I am not just talking about the frightening state of the world just now, but then we've been moving ever further into this general area since at least late 2016. No, I am referring specifically to the continuing issues I seem to have with using Blogger.  Access to my blogs, even with a recovery phone number, has become increasingly sporadic and frustrating when it comes to troubleshooting what the problem(s) might be.  I think I might move to Word Press or Wix before long and include a link to the new premises here for visitors who might like to find me in my new digital digs. Of this, more later. Lots and lots of cross-country skiing, however, has kept me sane this winter.  We even managed a final quick tour at a small, local area last Saturday before temperatures jumped from the teens to the mid-50s Fahrenheit Sunday and melted all of our lovely snow here in Mid-Michigan.  I have not skied this much since Norway in 1999-2000 in any case, so no complaints. The Grand Duchess
5 comments
Read more