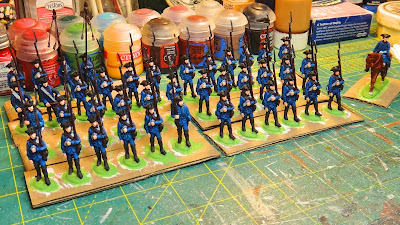 Well, The Young Master has been too busy for a game with ol' Dad this Christmas week as I had hoped, so I have instead busied myself at the painting table to clean up and make some headway with his version of Prussia's 3rd Garrison Regiment.  Here is where things stand this (Thursday) evening.  Getting through the highlight stage before adding lots of fine detailing.

The two drummers at this point need another thinned coat of very dark blue before I tackle the white sleeve chevrons and swallows wings.  So too do a few of the hats, which need some thinned black in the corners.  Overall though, the figures don't look half bad considering there were two of us working on them last January, February, and March before my son took a break from fairly routine painting in short bursts with me.

Clearly, The Young Master prefers the actual games to painting.  And that's ok.  The wargaming hobby is a borad church after all.

And as Greg Horne, the man behind The Duchy of Alzheim advised me a little over six years ago, you've got to follow kids' lead and let 'em pursue other interests if their enthusiasm wanes.  They'll be back.

Nevertheless, The Young Master has asked when we might begin his new squadron of Russian dragoons.  I've told him that I need to get further along with his garrison regiment before we get started with the cavalry.

No sense in getting ahead of ourselves.  As I finally worked out in the early 2000s (after 20+ years of very unsystematic work on my now long dormant 15mm Corps-level Waterloo project), juggling several painting projects in the air at once, for me at least, leads nowhere fast.  Better to be just about finished with one project before starting another and make some visible, albeit slow, progress in a forward direction.

Lots of figure painters and wargamers in the blogosphere seem to manage keeping several such project "plates" spinning on rods at once, and nevertheless churn out loads of well-painted figures in the process.  Sadly, I am not that talented.  Far better to recognize and acknowledge one's limitations, and then work within them instead of overreaching and becoming discouraged when things don't come together as quickly as they seem to for others.  Know what I mean?

A late Christmas gift from my in-laws arrived just a little while ago with the mail. . .  Volume 9 of Refighting History (2021) by Charles S. Grant.  The Grand Duchess and I had planned to dress up and have a few cocktails in the run up to midnight.  Hmmm.  I don't know now.  ;-)

Peter Douglas said…
There are worse outcomes than having your kid be too busy over the holidays, beats the heck out of bored and driving their parents crazy. Enjoy the holidays and the painting, and hopefully a game.
10:49 AM

Heinz-Ulrich von Boffke said…
Thank you for your comment Peter. Oh, we have had bored and stirring up trouble the last couple of days too! School begins on Monday, unless, of course, Omichron dictates remote learning at home once again. I think I might lie down in the street and wait for someone to drive (and back up) over me multiple times if that happens.

Kind Regards and Happy New Year (in any case),

Matt said…
A Happy New Year to you and your family.

I am a genuine fan of your painting style but obviously if you feel so offended by their sight I will gladly email my address...(I will even pay the postage!)

The Young Master will tread his own path. From experience (x3) an engaged child has a far better outlook than a disengaged one.
4:32 PM

David said…
The figures are coming along nicely. What flags will you be using? I did do the flags of Prussian Garrison Regiment 3 and posted them on my blog if you are interested.

A Happy New Year to you and your family, and looking forward to much more on your blog in 2022!

Heinz-Ulrich von Boffke said…
Happy New Year, men! Yes please, David! Could you send me the link to that particular post? Thank you!

David said…
Here it is, Stokes: https://nba-sywtemplates.blogspot.com/2014/08/flags-of-prussian-garrison-regiment-iii.html Look forward to seeing these in action with your splendid troops!

I think the best way of maintaining the hobby is ultimately your own way, I guess. That balance between motivation, inspiration and dedication is a difficult one to find. I think your output and this blog speaks volumes for the benefits of your approach.

They had BETTER circle back around!

February 06, 2021
What is it about the wonderfully tactile nature of dice of any sort?  I still have my old original D&D set from the very early 1980s, and have acquired quite a few more dice of all kinds since then.  The Dollar Store here in the U.S. once stocked packs of two dozen six-sided dice eight or nine years ago, and I must have purchased 10 or 12 of them.  Madness! A snowy, cold Saturday here in The Grand Duchy of Stollen, so besides the usual Tae Kwon Do -- The Young Master has an extra online clinic today, so three separate sessions for him -- and setting up my team submission folders online for my students' first collaborative projects due next Friday evening, there will be at least two skiing jaunts.  While we have had The Young Master on skis since the winter of 2014-2015, he has really started to shine on skis this season and expressed considerable enthusiasm for hitting the trails with Mom and Dad once again today and tomorrow.  Good man! In other news, firmer rules are takin
7 comments
Read more