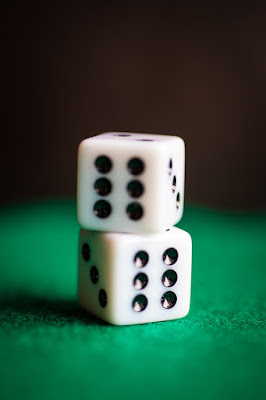 What is it about the wonderfully tactile nature of dice of any sort?  I still have my old original D&D set from the very early 1980s, and have acquired quite a few more dice of all kinds since then.  The Dollar Store here in the U.S. once stocked packs of two dozen six-sided dice eight or nine years ago, and I must have purchased 10 or 12 of them.  Madness!

A snowy, cold Saturday here in The Grand Duchy of Stollen, so besides the usual Tae Kwon Do -- The Young Master has an extra online clinic today, so three separate sessions for him -- and setting up my team submission folders online for my students' first collaborative projects due next Friday evening, there will be at least two skiing jaunts.  While we have had The Young Master on skis since the winter of 2014-2015, he has really started to shine on skis this season and expressed considerable enthusiasm for hitting the trails with Mom and Dad once again today and tomorrow.  Good man!

In other news, firmer rules are taking shape for close combat in my Tabletop Trifles: Comfortable Rules for Captivating Games of  30mm Glossy Toy Soldiers (ex-Call It Macaroni).  An exciting development, what?  For about 30 minutes Wednesday morning, I had the luxury of returning to bed for 30 minutes with a second mug of coffee and a feline in tow.  Even better, the writing muse just sort of hit me out of the blue.  I was able to write everything down clearly, concisely, and pretty quickly in one of several writing notebooks I keep on the bedside table in a short space of time.

Oh, the rules are hardly revolutionary in their approach, but the expression of them is my own, and I think they will work pretty well on the table.  I was finally able to nail down a simple (?) process that will work equally well for both infantry and cavalry without too many exceptions or addendums for one or the other.  This has been the sticking point for me so far given the infantry vs. infantry, infantry vs. cavalry, and cavalry vs. cavalry permutations.

One of the tricks has been finally to make some compromises and limit close combat, should it occur according to morale rolls, to a single round before one side flees and the other either pursues or withdraws to dress ranks and re-establish order.  Not necessarily realistic in the strictest sense, but a concession I am now willing to make after many years of tinkering with these sorts of questions.  It's that venerable tension between Realism on the one hand, and Playability (Sp?) on the other, you know.  Revisiting and reinventing the wheel, and all that kind of stuff!

One highly useful byproduct of receiving, reading, and rereading several times A Gentleman's War since Christmas 2019 has been the gradual realization -- very Featherstonian in nature admittedly -- that it's ok to develop "a game."  And while it might have its basis in and loosely bear some resemblance to history, my game does not attempt accurate simulation of military events and decisions.

Kriegspiel it ain't, but it still looks damn good on the table and conveys a sense of fun rather than a solemn training exercise.  After all, we want to generate some interest among children, grandchildren, nieces, nephews, and younger cousins and get them to want to play with us, right?  Sterile, ponderous simulations won't achieve that.

The three games I have played with The Young Master since late November last year, using the developing rules, have certainly been fast moving, fun, and bloody affairs that were decided in just one to four hours using these rules.  Granted, our games have not been huge sprawling affairs, one small raid and a couple of brigade-sized actions, but that's about right for us at the moment given school and other time commitments.  We have had a blast (pun intended) together in any case.

All that said, I think I am finally on the right track when it comes to writing my own rules.  The K.I.S.S. philosophy really is best. . .  Keep it simple stupid!  And just think.  It took me only about 35 years or so to reach that conclusion.  About as sharp as a mashed potato sandwich here.

Hopefully, The Young Master and I will be able to do some play-testing of these close combat rules before long.  Perhaps next weekend?  We'll see what he and the snow suggest.

Jonathan Freitag said…
For me, rules' writing is one of the many pleasures of our hobby. Good luck in this endeavor.
10:18 AM

Gallia said…
Cheers for your illuminations and satisfactions, Stokes.
Writing rules has been a continuous part of my hobby.
Hence I understand and am happy for you and the Young Master
Respectfully,
Bill P.
5:21 PM

Mark Nichipor said…
Great post and I agree with your thoughts.

Your games with the young master were very enjoyable and inspiring. It makes me remember my games with my son and also my daughter with great pride and with pleasure. Thank you for sharing.
5:53 PM

The Good Soldier Svjek said…
I'm a BIG fan of AGW which are everything a set of rules should inspire too , simple, easy to remember and fun !
9:36 AM

Keith Flint said…
Well done Stokes - keep up the good work. And don't forget to make the rules public when you're ready. Put me down for a pre-order!
7:11 AM