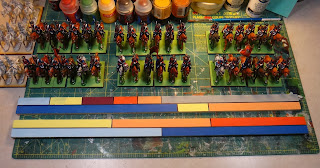 No, not hitherto undiscovered paintings by Piet Mondrian (or The Patridge Family Bus), but a movement stick (top) and a musket volley and skirmish fire stick (below).  The rulers are 18" in length and based on the Grants' dimensions laid out in The War Game.

Still glossing the Austrian dragoons piecemeal, but with the planned Thanksgiving Weekend game between the Young Master and me now two weeks away, it seemed like a good idea to begin preparations for it.  I aim to simplify things as much as possible to keep the game moving and a positive experience for young Paul, now 11 years old, so that he will want to continue these occasional tabletop adventures with ol' Dad.  Hence the movement and firing sticks, which owe as much to the von Reisswitz kriegspiel as they to Charles S. Grant.

The measuring devices I've produced over a couple of days have movement dimensions marked on one side, and firing distances on the other.  I must touch up and label the various colored bars before everything is finished, but once done, the Young Master and I will each wield a movement-firing stick on our upcoming game(s).  I've also whipped up a four foot artillery stick, painted in yellow (long range), orange (medium), and red (canister range).

The movement stick, that closest to the dragoons, has infantry, artillery, and transport move distances marked out on the upper edge with those for heavy and light cavalry on the lower edge.  The firing stick at bottom has musket volleys distance marked out in yellow (long range), orange (medium range), and red (close range) with ranges for skirmish fire denoted in light and dark blue.  Once labeled, all movement and firing should be clear and easy to determine without referring to a play sheet or fooling with tape measures.  He said.

As to the scenario we'll attempt, I am leaning toward a refight of Sawmill Village, although The Young Master has already informed me that any settlement laid out on the table will be dubbed  Hasenpfeffer.  As Greg Horne, the man behind The Duchy of Alzheim blog, advised me several years ago now, when it comes to kids, you've got to follow their lead.

tradgardmastare said…
Stokes,
Loved the caption to your photo, pity it wasn’t true, Your playing aids are great looking ( are you tempted at all to hand make them for wargamers and sell them on Etsy or via Jim’s site) and will enhance the experience for your opponent and you in the forthcoming game. I am so looking forward to seeing photos of it and hearing how it goes.
1:25 AM

tradgardmastare said…
If you need a second settlement in an future games I do hope you will call it "Gilly Gilly Ossenfeffer Katzenellen Bogen by the Sea a lesser known coastal town in north Germany I believe.
1:30 AM

Ross Mac rmacfa@gmail.com said…
I'm a big fan of measuring sticks of this sort. They are like a yardstick you can read at a distance and spot again when you've laid it down....somewhere.

Make sure you have the longest one so you can rap the young gentleman' knuckles if he gets out of line. Real Old School.
6:23 AM

Der Alte Fritz said…
I’d be more inclined to simplify things like the musket ranges to fewer categories. For example, musketry is either Close Range or Not Close Range ( combining medium and long into one category). Long range merely identifies the limit on the range of the weapon.
9:16 AM

A J said…
I first encountered movement sticks at Peter Gilder's holiday centre, and I've been a big fan of them ever since. They save a lot of faffing around with rulers.
3:00 PM

Big Andy said…
You have jogged my elbow to get some shiny sticks done for shinyloo. Mind you when I'll be able to use them in anger in the current climate is another question .
3:59 AM