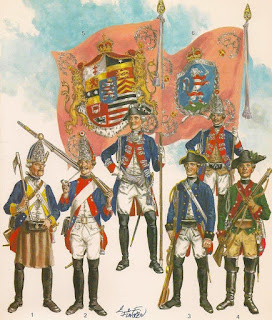 A old Fred and Lillian Funcken illustration of various German auxiliary troops that fought in the American War of Independence.  Pay special attention to the two standard bearers at the rear, proudly displaying the colors of the Hessa-Hanau Erbprinz Regiment ca. 1776.

Far too quiet here at Stollen Central here during recent weeks.  The best way to put it is that "life" has simply stepped in between me and any attempts to get into the painting chair most evenings.

Now, some might suggest, "Stokes, old bean, why in the world don't you paint as a way to wind down following a long day?"  And that is a wonderful suggestion, yes, but one that does not always work in practice for yours truly.

While painting helps many to forget the cares and stresses of the day, I need a fairly clear mind to do so productively, and this particular semester has been brutal with not only teaching, meetings, and some research, but life at home has been, shall we say, busier than we would like too.  Physical and, more often, mental fatigue mean that most evenings the Grand Duchess and I simply collapse into bed where we watch an episode of New Tricks on dvd before one, or both of us conk out for the night.  Sigh.  All of this means that painting has simply ground to a halt since the start of February.


Still, that does not mean that hobby activities have not been happening behind the scenes.  First, a friend in Belgium recently sold me a bunch ( and I mean a bunch) of unused, unpainted Minden Prussians and Austrians secondhand, purchased back when Frank Hammond still held the reins of the company.  My friend who goes by the sobriquet 'Musketier,'  finally concluded that he would not have time to paint them since his interests have moved on during the intervening years.  Given the number of figures, a very reasonable price for the lot was agreed upon, and I now have more that I know what to do with.

That is not really the case, of course, and there are definite plans afoot about how to organize and paint the new drafts to the Grand Duchy of Stollen and Electorate of Zichenau armies.  I have sent the last couple of weeks, when a spare few minutes or two has become available, sorting through everything and placing the various figures into the compartments of small plastic parts boxes.  After finishing everything last night, and making a few notes, I see that I have enough figures for four additional 60-strong Charge-sized regiments of line infantry (three in Prussian uniforms and one in Austrian) and two 30-strong grenadier battalions (in Prussian uniforms).  This is in addition to all of that new cavalry and Minden Austrian infantry I treated myself too around the time I turned 50 last fall plus the Christmas 2016 gift from the Grand Duchess and Young Master.

Needless to say, the pile of unpainted lead is now rather substantial, and, in good conscience,  I should curtail future purchases for a while. . .  Except in the case of some Minden Russians when those are released since I would like to paint a unit of these as Russian marines (see the illustration below).  A gaming friend, who lives outside of Chicago, once advised me to steer the course with the 18th century and avoid deviations into other periods, and if there were ever any questions in my mind about this sage advice, those have been swept away for good and all now.  I am well and truly entrenched in the era and will "do" the mid-18th century until they carry me out of Totleigh-in-the-Wold feet first.

The result is that things will be busy, busy, busy at the painting table over the next few/several years as I work through all of the related painting.  The carrot at the end of the stick, however, will be two rather sizable fictitious forces (not huge, but sizeable) based on -- Surprise, surprise! -- the Austrian and Prussian armies of the mid-18th century.  However, there will also be the usual fair amount of whimsy to keep things interesting.  I have already taken a few minutes to develop a painting progress chart in Word to help keep things on track and moving forward once some of the current concerns stabilize, things calm down, and normal hobby activities can resume once again. 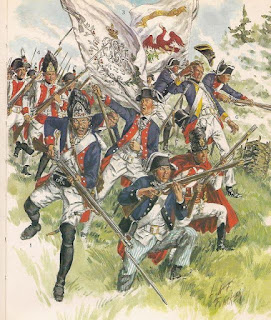 Another Funcken illustration featuring another bunch of German auxiliaries, including a group of Anspach-Beyreuth troops in the foreground (I am particularly drawn to the grenadier sporting a bearskin cap) with standards in the middle distance.


Which brings me to the final point for today.  Long-time visitors to the Grand Duchy of Stollen blog might recall that my sartorial and vexillogical interests lean toward to the uniforms and flags of the Reichsarmee, fascinating due to its variegated appearance.  I am, moreover, captivated by the various German mercenary forces that augmented the British war effort in Colonial-era North America during the American Revolutionary War as we call it here in the United States.

Some of those formations carried standards that deviated markedly from the typical Prussian or Austrian patterns back in Europe.  I have included a couple of old Funcken illustrations with today's post that feature a few of these for your perusal.   Maybe not strictly accurate, and I know some have questioned the accuracy of the old Funcken guides in the past, but once painted, some of the newly acquired figures that I blather on about above will eventually have these standards awarded to them.  Since my armies are semi-fictitious though, this sort of combining, mixing, and matching to produce a rather whimsical collection of units and flags is something I can easily live with.


Ok, time to stop all of this useless shilly-shallying, get serious, and take care of some work that needs to be cleared off the desk and finish a crime thriller in time for class on Monday morning.  How many weeks until the end of the current semester again??!!

Wellington Man said…
That is one hell of a lead pile, Stokes. Your plans for them, however, sound scrumptious! I am also finding it impossible to resist all those funny-looking Germans and their weird and wonderful flags.
3:36 PM

Ross Mac rmacfa@gmail.com said…
Some leisure activities are most enjoyed when one has....leisure! Meanwhile, enjoy the planning, dreaming and scheming.

Rahway said…
You can find reference photos the actual AB color her:
http://amhistory.si.edu/militaryhistory/collection/object.asp?ID=234
6:28 AM

Anonymous said…
I like your plan Stokes. I too should probably curtail buying more figures...but I'll still plan and that's when I'll have to be patient and apply will power!
4:20 PM