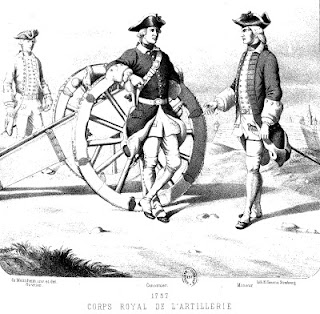 A cold, snowy January Saturday here in Mid-Michigan although sadly not enough snow to do anything with.  Still, a good day for another mug of coffee and some time here in Zum Stollenkeller.  The last 7-10 days have been too busy, so it's nice finally to have a truly free weekend with little to no planning for Monday's and Tuesday's classes since my students have peer review sessions of paper drafts coming up.  Ahhhhh. . .
----------

Which leads me to sorting.  I spent a pleasant hour or so down here last night following the Young Master's bedtime digging through the large drawer where my pile of lead and plastic reside.  It's always fun to root around the mound of stuff and see what you uncover, what you forgot about, and/or what might jump to the head of the painting queue merely because it strikes you.
----------

More specifically, while I am not quite finished with several replacement standard bearers and additional drummers currently on the painting table, I took the opportunity to retrieve those 30 RSM95 French SYW Cuirassiers in bearskins and the Litko bases onto which I'll glue them.  It seems my painting muse has suggested that these will be the first of the five new regiments of cavalry in the painting plan for 2017.

I use the base dimensions laid out in Pater GIlder's In the Grand Manner (these have always looked just right to me for horse & musket era armies), so cavalry are mounted in pairs on 40mm wide by 45mm deep bases.  There will be enough space between the figures to wield a paintbrush effectively, so I'll skip the temporary painting bases and simply mount the bare metal horse figures to directly to the Likto bases.  Once I have glued the poles into the hands of the two standard bearers, the figures will next be glued to the horses, and then I'll set everything to one side to finish the infantry standard bears and drummers during the next two-three weeks.
----------

Over at The Duchy of Alzheim, Greg Horne is struggling to locate a large number of previously painted figures in his collection that seem to be missing.  I certainly can feel for him and hope Greg manages to locate them!

While nowhere near as potentially upsetting, I cannot seem to find 30 unpainted RSM95 French SYW dragoons in helmets that I purchased cheaply secondhand quite a few years ago.  Darn!  I know I have them somewhere, but for some reason, they have become separated from the rest of the unpainted castings here at Stollen Central.  If I can find them, I'll order another 30 horses for a sixth regiment of new cavalry.  It's like a disease.

Bill Protz too, I think, shares this cavalry predilection if memory serves me correctly.  That point has always been the main reason I never really got into the American War of Independence, an otherwise fascinating conflict.  Not enough cavalry in that one for me though.  Visions of Errol Flynn, David Hemmings, the Scots Greys, and all that you know.
----------

After the Grand Duchess and I finished watching the final episode in the third series of Last Tango in Halifax (starring the great Derek Jacobi, Sarah Lancashire, et al) via Netflix last night, I spent a bit of time with a pencil and my bedside notebook again thinking about artillery and doodling around with my ideas for rules, heavily influenced  (plagiarized that is) from Featherstone and other wargaming greats past and present.  For roundshot, I am moving toward thinking along two axes, one for drift and another for grazes.  It all seems to be coming together nicely, though I am restricting my gun range to 72" maximum.  Cannister is 12" or less and I'll simply roll a D6 here with maybe a +2 added for targets more dense than a close order infantry line.   Hmmm. I might have to stage another playtest game in February.  Yeah, that's the ticket!
----------

One question questions occurs to me in all of this though.  What was the typical elevation at which smoothbore cannon were typically fired during the mid-18th century?  The elevations screw was, if I am not mistaken, a later innovation, so things were probably fairly imprecise during the 1740s-1760s, right?  On that note, I recall reading years ago (I think?), where later Napoleonic guns firing roundshot were concerned at least, that gunners sought to obtain the greatest number of bounces they could, to both extend range and potential damage to enemy formations.  If I understand the diagrams in Firepower by B. P. Hughes correctly, this would be a fairly flat trajectory of between 0 to 1 degree of elevation.  Does this strike you as suitable for artillery in the WAS and SYW era?  I am, of course, interested in hearing from others who are more knowledgeable on the subject.
----------

Ok, enough nattering on about all of this.  Time to make use of a delightfully calm, quiet, and totally free, free, FREE Saturday to do some painting.  Happy Weekend everyone!

A little while ago, the postman delivered a package containing Charles Grant's Refighting History, Volume 1 and Volume 2 (Volume 3 arrived about three weeks ago).  Holy cow!  I am in wargaming Nirvana.  As I remarked to the Grand Duchess a few moments ago, "I'll see you in June!"

Sascha said…
I really enjoyed this post! Especially the missing Miniatures; if I could only find the command figures I bought this Summer ;-)

Concerning your question about artillery: As I know they used different wooden wedges to adjust the barrel evelation! But, I think you're right that the purpose of a shot always was to bounce several times to get a longer hitting zone with Roundshot. Your cannons rule sound quite reseasonable and easy to me; I like that!

Sascha said…
P.S:
Due to Regulation Prussian gunners roughly aimed at the Flags so that they won't miss the target. And they awalys tried to adjust distance by aiming short of the Target. So that they will always can observe the Fire to make Better corrections.
1:47 PM

Jacko said…
I hope to see the replacements painted and in use. It might motivate me to finish mine. Cheers
2:36 PM

Anonymous said…
Lovely post Stokes. I think all wargamers, collectors of miniatures love to 'organise' their unpainted lead pile, and then normally add to it very soon afterwards!

As for artillery, I think the 'Swedish' style guns in the SYW had a screw to adjust the elevation; I know that the British guns did. The majority though had wooden wedges. The ideal for roundshot was for it to bounce close enough to the front rank so that the trajectory took at least two or three men in the file and then went on to do the same to any troops following up behind in a second rank. Have fun doing your rules.
8:29 AM

Heinz-Ulrich von Boffke said…
Thank you for your comments and suggestions, men! All very helpful. The von Scharnhorst material looks very good too. I've had a preliminary look and can actually make sense of several important details although it is printed in the old Fraktur script.