Ladies and Gentlemen. . . Start Your Engines! 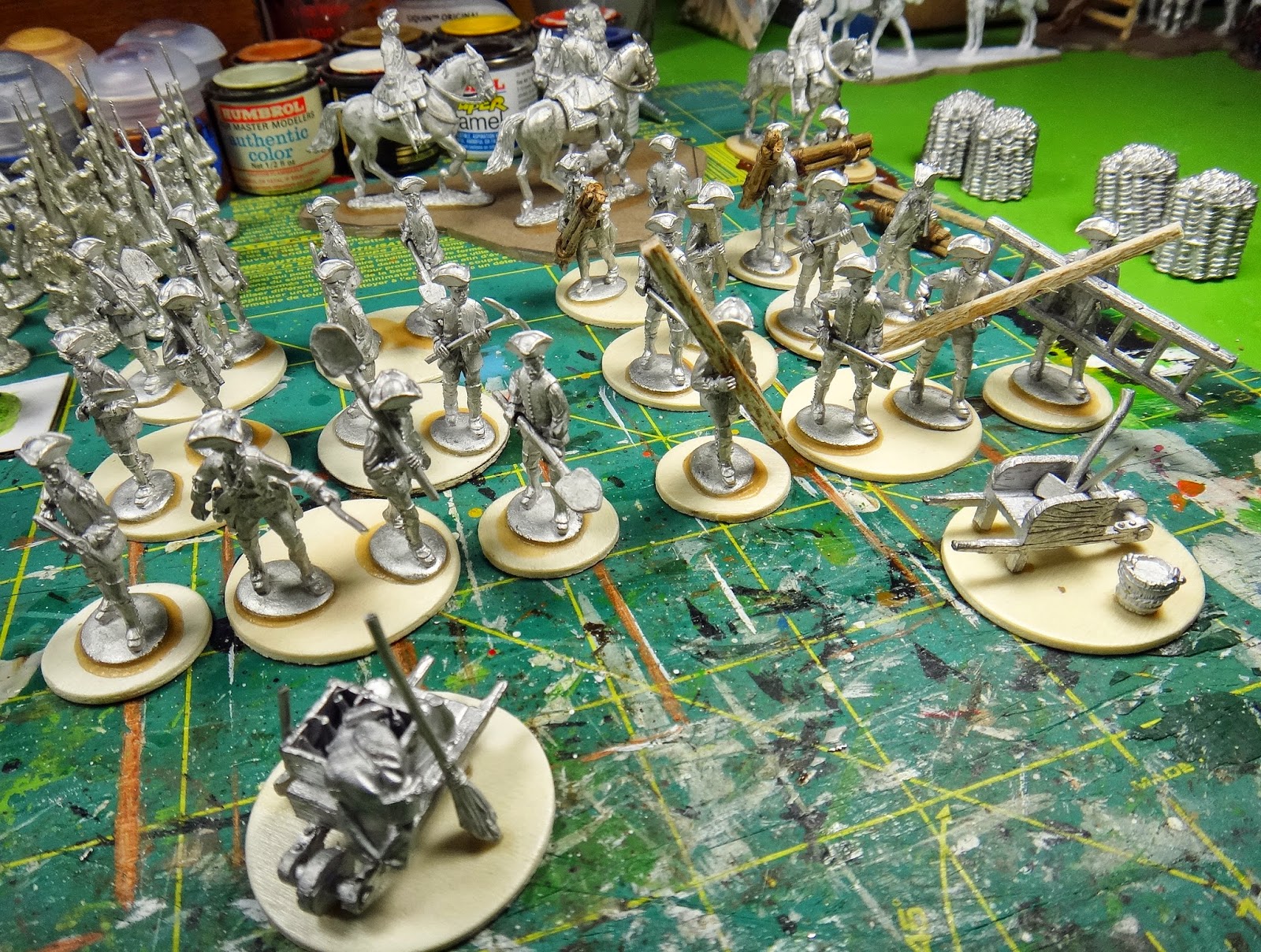 The Corps of Pioneers, all ready for base-coating and then painting.

Well, I managed to get the various tools and things glued into the hands of the two dozen Minden pioneers yesterday, as mentioned previously, and I'll apply the white gesso basecoat (two thin coats) on Saturday.  With any luck, I might be able to apply green to the bases, fleshtone, and gray to the eventually black hats on Sunday.  The reading and preparation for classes on Monday is a bit lighter this weekend, so completing a bit more at the painting table is a distinct possibility.  We'll see how things play out.

Look very closely, and you'll spot those scratch-built facines in the hands of three figures in the right-hand company.  You'll also observe that I decided to give one company digging tools and the other wood-cutting implements.  Each company also has a wheelbarrow of appropriate 'stuff' to help set the scene whenever and wherever the Corps of Pioneers is deployed.

The Crann Tara mounted officers in the rear are due to be painted in Hanoverian engineer officer uniforms, of which there is a very colorful example somewhere on the Kronoskaf: Project Seven years War website.  The mounted Austrian German officer to their right -- yeah, the guy whose head was inadvertently lopped off when I cropped the photograph in a hurry -- will be painted as, you guessed it, an Austrian engineer officer in the red and blue uniform worn by these men.  I painted a vignette of arguing Austrian engineer officers on foot and on horseback two or three years ago, and I've been a fan of the uniform ever since.

Finally, you'll also have spotted four of the six Foundry gabions that have been cluttering up the Box o' Bits for a couple of years off to the side of the picture.  Well, if you're going to paint up some pioneers or sappers, you might as well give them a redoubt or flèche to construct, right?  So, using a couple of Charles S. Grant how-to articles from the 2011 and 2012 Wargamer's Annual, respectively, as a guide, I will also take a stab at building something passable in modular sections to represent the gradual construction of the envisioned emplacement over a certain number of turns, or simply to have in place well before the opening shots are fired.

But I'm putting the cart before the horse as usual.  It's best to get the pioneers themselves painted up first before diverting my attention elsewhere.  Gotta keep those butterflies in check, you know.

Ross Mac rmacfa@gmail.com said…
Shouldn't that be "start your engineers"?

marinergrim said…
Looking forward to seeing progress with these.
2:35 AM

The sappers will add a very nice touch to your battlefield arrangements. The construction of a bridge or its demolition, the building of field works with those newly found gabions or the construction of a road - all these are right around the corner. It might also allow you the ability to play lower level, skirmish or slightly larger, engagements with these figures. And, of course, the desire to do a few more vignettes certainly can be in the offing.
Continue to have fun and enjoy the winter.
My best regards,
Gerardus Magnus
Archbishop Emeritus
7:09 AM

Comfortable Rules for Games of Glossy Toy Soldiers in the Old Style. . .

July 09, 2022
Introduction A Tangled Mass is a game of toy soldiers in the old style, set more or less in the middle part of the 18 th century.   Our miniature forces are colorful and, we hope, glossy.  Although the latter, like so much else, is up to the discretion of the players.   But it is the modeling, brushwork, and unit organization of hobby greats like Gilder, Mason, and Robinson that provide our visual touchstone and continue to inform "the look of the thing" even now. Tabletop armies in A Tangled Mass can be historic, semi-historic, or whimsically fictitious, but the more flags and mounted officers, the better.  Formations, while bearing some resemblance to their historic precedents, are generic: column, line, or extended order for lighter types.   Squares, while possible, are less common than during all of that later Napoleonic madness with its guillotines and Spanish ulcers.  And we'll simply choose not to mention patent leather dancing pumps, or that unseemly bedr
9 comments
Read more