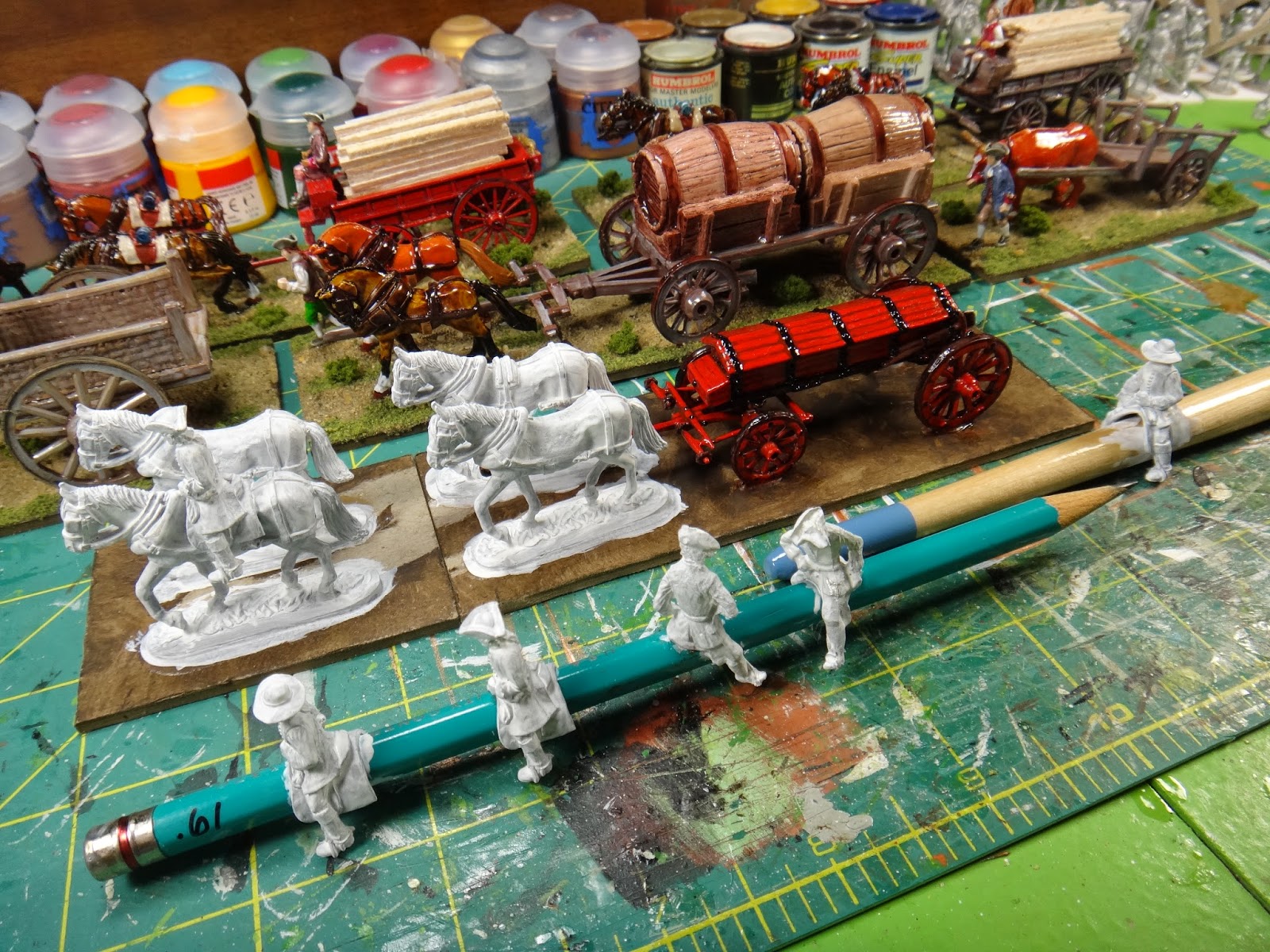 The final few bits and pieces of the wagon train, barring the previously mentioned Colonel von Bauchschmerzen, his coach, horses, and uhlan escort.  Von Bauchschmerzen, due to be painted next month, has in the meantime stopped off for several days in Karlsbad, to take the springs, before continuing on toward Dresden.  Once there, he is to pick up a large order of porcelain tableware ordered by his wife, Frau von Bauchschmerzen.

Call it an exercise in speed painting this weekend.  I've got a bit of a lull for a few days before I am inundated with various student papers and/or drafts thereof, which will occupy considerable time from now until the end of the term in about three weeks.  So, I've decided to see how far along I can get with the four-horse team and the various drivers pictured above by Sunday evening.

Cross your fingers and toes though.  The Grand Duchess has a day-long regional conference here in town all day today, so it's just the boys here at home.  I've promised the Young Master that we will bundle up and go for a walk outside after lunch with, depending on his wishes, perhaps a trip on the side to his favorite cafe downtown for a cookie and some hot chocolate.

CelticCurmudgeon said…
My Dear heinz-Ulrich,
Words from a person of a certain age:
Never, never miss an opportunity for hot chocolate and cookies with the young. That is a moment which, once gone, can never exactly be relived. You can always paint a toy soldier -but will you remember it as much as the moment when your son loks over and says "Thanks, dad. This was great!"
Enjoy what remains of the weekend,
Gerardus Magnus
Archbishop Emeritus
9:40 AM

Scheck said…
Don´t worry, I have the same problems with students papers (more: plans and models) and the miniature painting is paused. That´s life. We follow you anyway and are curious to see more of your fine paintings, whenever you find time!
Peter
1:28 AM

March 16, 2022
A nd I am not just talking about the frightening state of the world just now, but then we've been moving ever further into this general area since at least late 2016. No, I am referring specifically to the continuing issues I seem to have with using Blogger.  Access to my blogs, even with a recovery phone number, has become increasingly sporadic and frustrating when it comes to troubleshooting what the problem(s) might be.  I think I might move to Word Press or Wix before long and include a link to the new premises here for visitors who might like to find me in my new digital digs. Of this, more later. Lots and lots of cross-country skiing, however, has kept me sane this winter.  We even managed a final quick tour at a small, local area last Saturday before temperatures jumped from the teens to the mid-50s Fahrenheit Sunday and melted all of our lovely snow here in Mid-Michigan.  I have not skied this much since Norway in 1999-2000 in any case, so no complaints. The Grand Duchess
5 comments
Read more