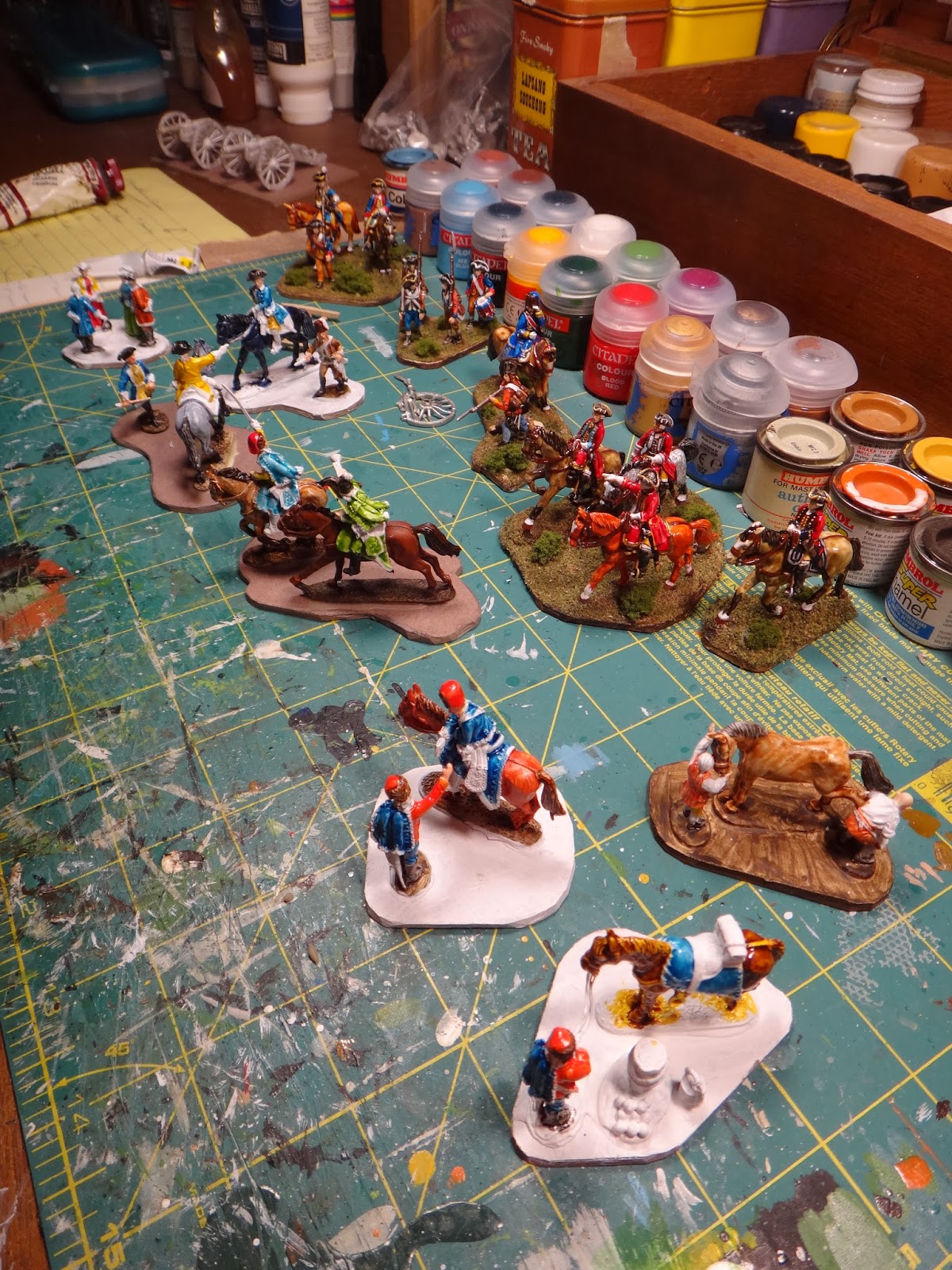 The current crop of vignettes on the painting table, featuring a mix of figures by Minden, Fife & Drum, and one or two by RSM95.

Well, the new college semester is underway, but I'm not quite as busy this time around, which means a little more consistent painting time most evenings.  First off, it's time to clear the decks by finishing these four vignettes, two of which are intended as multibase scenes.

At the moment, I am at work the various figures in the foreground.  Here, General von Zieten hands a message to an officer on horseback (facings and pelisse fur were done after this photograph was taken) while another officer from the same regiment holds onto ol' Hans Joachim's steed and, nearby, a couple of blacksmiths reshoe a third horse.  After the Grand Duchess' short research trip to Berlin next summer, I'll have a mobile forge from Berliner Zinnfiguren to add to this particular tableux.

Don't you just love my over-reliance on these French words?  Pretentious?  Moi? Clearly, the spirit of Frederick II and his fascination with the French language and culture has overtaken me today.  Ok, ok.  Time to get a grip, Stokes, old boy.  There now.  That's better.

Moving right along, you'll see a hussar office and his trumpeter just beyond, who are destined to lead the brigade of Stollenian cavalry, followed by a four-figure vignette consisting of two bases, and finally a few ladies and gentlemen on foot.  These four figures will join my band of frolicking aristocrats frolicking in the great outdoors and the musicians who provide their soundtrack, all of which were completed last winter and spring.  And THEN, it will be time to order those baggage carts and wagons and get started on the pontoon and powder wagons already in the pile of lead courtesy of the Grand Duchess and Young Master this past Christmas.  It's a busy time here in Zum Stollenkeller this winter! 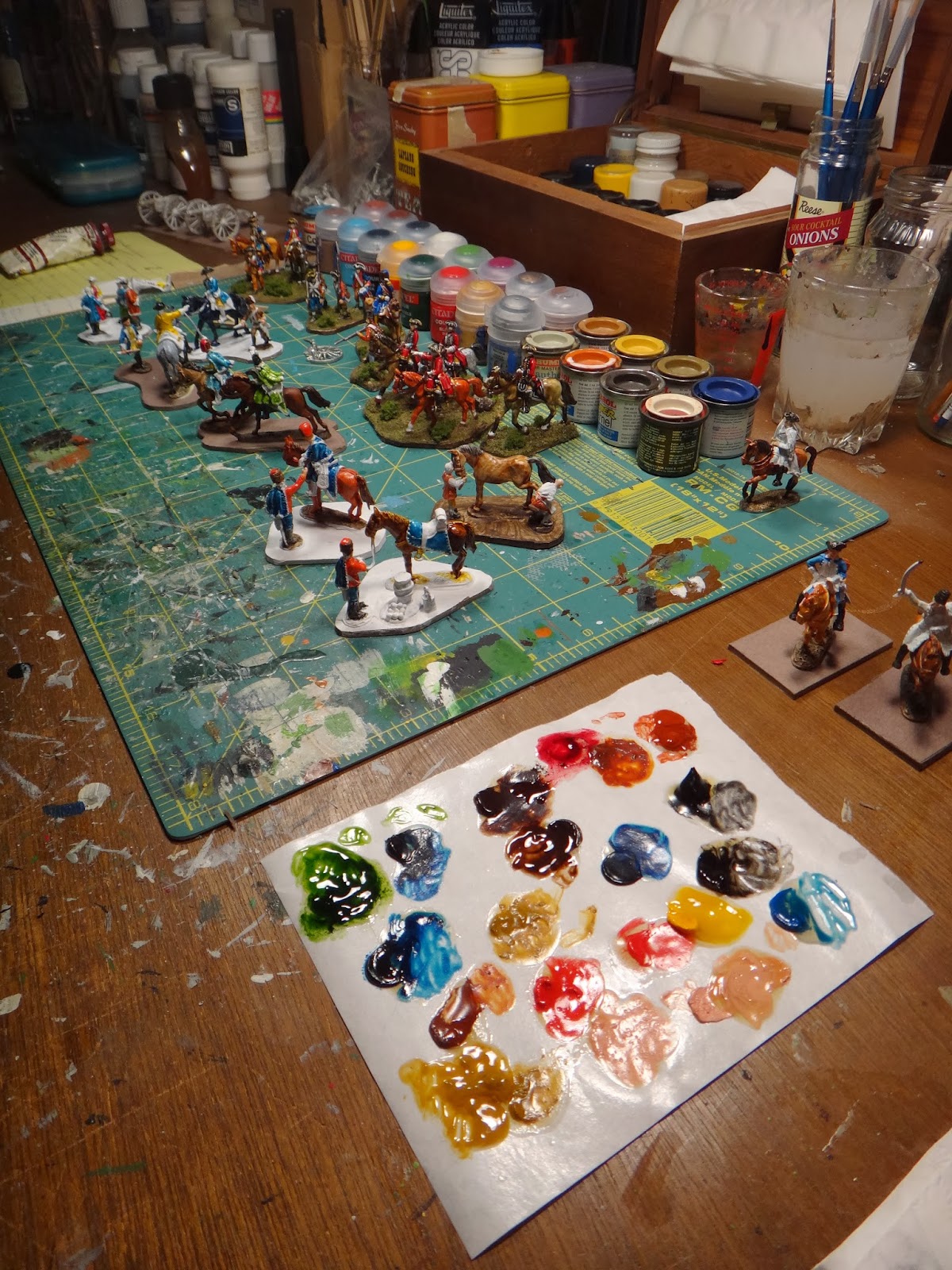 And here's a shot of my waxy palette paper with various blobs of oils that have been thinned way down with Liquin Original.  The thinner you get your paints, the easier the pigment runs off raised ares on each figure and settles into recessed areas, providing instant (and subtle) highlights and shading.  What could be easier? 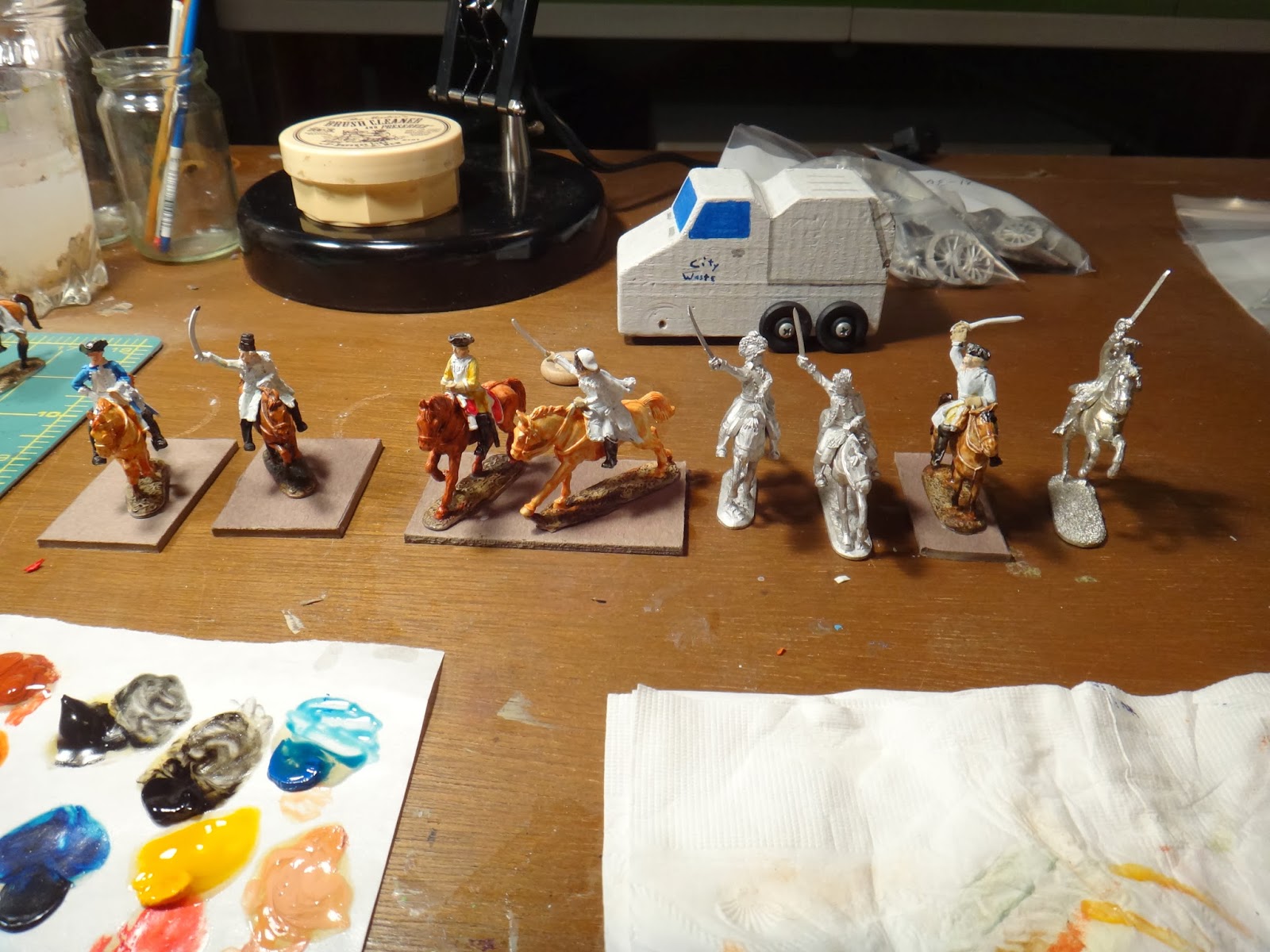 Finally, a random mix of RSM95, Minden, and Fife & Drum  mounted figures, all of which will become singly based Aides de Camp.  Taking my cue from the late Paddy Griffith's Divisional Level Game in Napoleonic Wargaming for Fun (1980), it makes good sense to include a few couriers in my future games.

Springinsfeld said…
Looking very promising, I look forward to seeing them finished and on the table. Nice little dustbin lorry too.
2:27 AM