Let's embrace our eccentricities as wargamers! 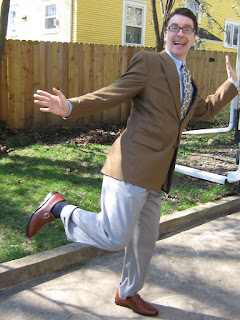 Yours truly, doing the all but forgotten 'First Day of Spring Dance' on our patio, March 2012.


My wife, the Grand Duchess, and I often have heated discussions about my personality, habits, interests, and world view.  Most recently, she implored me to attend a non-mandatory reception for faculty and staff at our university early next week to show that I am capable of being a "normal person."  Her exact words.

She has also, at different times in the past, used the term 'eccentric' to describe your truly.  Imagine my pleasure and surprise, then, when I unearthed the online presence of The Eccentric Club, which indeed confirms my wife's accusations, specifically the following language from their "Are you an eccentric?" page.  To wit, an eccentric is described as:

The first five characteristics listed here are the most important and apply to virtually every eccentric.

Nonconformity is, of course, the principal defining trait of the breed..."
(Dr D.Weeks, J.James "Eccentrics: A Study of Sanity and Strangeness", 1995)

Well, not that I ever really minded my wife's assessment, but I've decided that with the approach of my 46th birthday in early November, and being at approximately the half-way point of my life, simply to roll with the punches and embrace my eccentricities.  In other words. . .  Hello!  My name is Stokes, I'm an eccentric, and the possibility that I might be weird no longer bothers me.  I like to play with toy soldiers and dress nicely even though most places no longer require it.  There now.  That didn't hurt, did it?  We now return you to your regularly scheduled broadcast.

Fitz-Badger said…
Hear! Hear! (or is it "Here! Here!"? ha ha)
Either way I agree. I fit a number of those criteria, and so do many/most of my favorite people ever.
7:31 PM

The Ferrymen said…
Hear! Hear!
Since the mindless majority have so thoroughly demonstrated their laziness, their short-sightedness, and their total lack of imagination, who would want to be lumped with them anyway?
Celebrate your singularity, Mr. Stokes!

well done you! You may well be aware of 'The Chap' - but if not I think you will find many delights therein!

It can be found on the ether web, and is available by post to the former British North America.

With best wishes, as ever

Bluebear Jeff said…
I've never doubted my eccentricity . . . I've embraced it . . . and I heartily approve of your embracing yous as well.

Big Andy said…
Quite a few of those criteria would fit Big Andy too. I shall show the post to my wife Carole when I have a minute.
I've never even considered becoming part of the herd, mod ,pack or whatever indeed as far as I'm concerned most of 'em can Flock off!
3:45 AM

I've had similar conversations with my spouse and family! I may also be a member of that club.

marinergrim said…
are you sure you're not an Englishman? Quite right - excerpt your right to be an individual.
2:05 AM