"I couldn't hear the sound of my own footsteps. It was the walk of a dead man!" 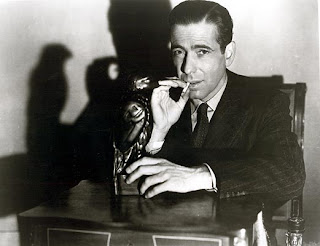 Humphrey Bogart as Sam Spade with a cigarette and the maltese falcon. . .  The image that comes to mind for many when the term Film Noir is mentioned.
A non-toysoldierly post today I'm afraid everyone!  Tomorrow (Wednesday) is the first day of May Term, and I'll be teaching my course on classic Film Noir, something to which I always look forward.  Lots of reading, viewing of different films, and discussion -- to say nothing of student papers and projects -- over the next few weeks, but it's always interesting and thus a lot of fun.
We kick off with Billy Wilder's Double Indemnity (1944) tomorrow at 10am.  This particular movie is one of the  best examples of the genre/style/school, which typically makes quite an impression with young viewers these days given its emphasis on story, plot, and character development in complete and utter contrast to many of the more contemporary films they know.  That is to say it, Double Indemnity, is not chockablock with endless car chases, explosions, fight scenes, and jiggling nude, or semi-nude starlettes who happen to be the flavor of the month in Hollywood and the popular consciousness at the moment.
Another feature that makes Double Indemnity so enjoyable almost 70 years on is the acting of its three stars, Fred MacMurray, Barbara Stanwyck, and Edward G. Robinson.  This particular film, unlike many others of the genre, was an 'A' release, so it wasn't limited by finances to less than stellar actors or half-built sets that had to be disguised by low lighting and shadows.  That and the movie's ending is almost totally bleak, which, to my mind, is THE deciding factor in whether a film is truly 'noir' or just a melodrama that features a few visual trappings of film noir, for instance shadows cast by Ventian blinds onto a wall behind an actor or actress.
Finally, the title of today's post comes from a line uttered by Mr. MacMurray's character, insurance salesman Walter Neff,  during his confession into an old dictaphone machine. I won't tell you anymore than that since I don't want to spoil the film for those who have not seen it.  But, to say I'm excited about beginning the course is an understatement.  If you haven't seen Double Indemnity, buy, rent, or stream it forthwith and buckle in for a wild ride.  It will knock your socks off. 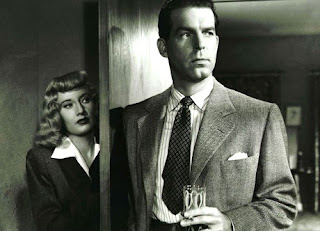 Barbara Stanwyck, as Phyllis Dietrichsen, and Fred MacMurray, as Walter Neff, in a scene from Billy Wilder's Double Indemnity (1944).

Ed said…
Excellent post about an even better film! The Landgravine and I got to see Double Indemnity on the big screen 3 or 4 years ago. It was quite a treat.

However...when was the last time you saw an apartment with a door that opens out INTO the hall? Since that is the side with the hinges, it sure would make break-ins easier, if making that particular scene a little more difficult!

Last night was "Anatomy of a Murder." Another great flick.

marinergrim said…
Old b&w movies are so easily dismissed by the modern moviegoer and yet they are a treasure trove of good acting (when it was still an art form and not a job description) and direction. Modern films have to deliver big money whereas sixty years ago more people went to the movies and so expectations from the backers was lower (just more frequent).
12:06 PM

Anonymous said…
I may be an oddity, but I prefer the ladies of old B&Ws to the film women of today: The old-school ladies seem sharper, more on the ball mentally...women in film today are basket cases by comparison.
5:18 PM

Heinz-Ulrich von Boffke said…
Ed -- I'll have to see Anatomy of a Murder. I've heard of it, but have yet to see it.

Grimsby -- Yes, it is a real shame what the thirst for ever0increasing profit margins have done to Hollywood and, by extension, the movie going audience.

Conrad Kinch said…
A fine film - though I think I would have to put The Third Man down as my favourite noir. Brighton Rock would be a close second though.
4:46 AM

Der Alte Fritz said…
Have you ever seen "Footsteps In The Dark" with Errol Flynn? Not quite film noir but more of a light hearted take on the genre. It is a very obscure film but I've long thought that it was one of Flynn' s best films as it was so different from his usual "heroic" films.

Anatomy of a Murder is definitely a must see movie. Much of it was filmed on location in the Upper Peninsula. Have you considered doing something like a Jimmy Stewart film festival for your class;