The Raid That Almost Happened. . . 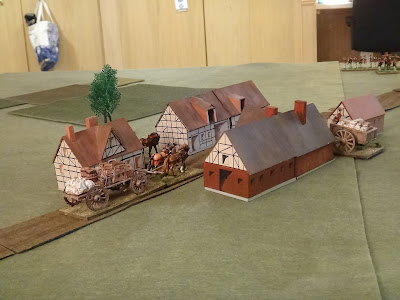 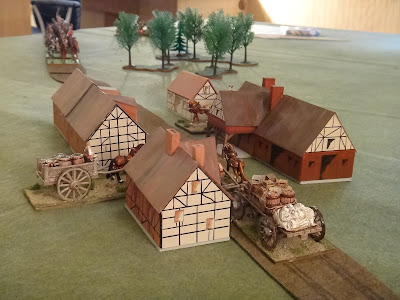 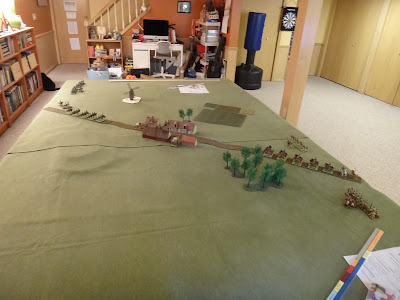 Everything was all laid out yesterday by midday for a small raid scenario, but fate intervened.  The Young Master, as 11-year old boys are wont to do, made some very questionable choices elsewhere here in The Grand Duchy, which forced the planned game to be postponed while the three of us sorted through things, discussing choices, expected behavior, and who can change his behavior in the process.  Sigh.

As you can see, everything was ready to go, including two small raiding parties made up of various light troops, a small unassuming village, and even some of my supply wagons painted back in 2013, plus the ol' balsa windmill, now affixed to an irregularly shaped 3mm ply Litko base that badly needs some landscaping.

In addition, I managed finally to whittle my rules down to one side of a single reference sheet (reduced from five pages), with room for a couple of Adolf Menzel period specific line drawings of battle scenes AND finally came up with a neat title for said rules.  'A Tangled Mass.'  Did you see what I did there?  Sadly, all to no avail.  I was looking very forward to trying these out.

Later, once things had calmed down, and the family had moved on, I put the figures back into their large plastic tubs for safe keeping and cleared away the scenery.  Elsewhere in domestic life, I hope The Young Master makes better choices this week and eventually returns the purloined items, which are not toy soldier related.

As for our planned game?  Maybe next weekend.

Peter Douglas said…
No battle plan survives contact with the enemy…or with a kid with other priorities. Good luck getting the young master back at the table. I’m sure it won’t belong.
8:50 AM

Chris Gregg said…
Bad luck Stokes, better luck next time. They are frustrating but you've just gotta keep on showin' 'em love. It doesn't get any better as they get older....I organised a wargame involving one of my grown up daughters and her partner and at the appointed time, with a no-show, found she had just got in the shower to wash her hair!
Chris G
5:17 PM

tradgardmastare said…
I look forward to seeing the game when the time is right. Your rule endeavours will have been well worth it.
2:25 AM

StuRat said…
If he's faulty, you can always return him to the manufacturer.

Assuming you got the extended warranty....
6:35 PM

Neil said…
As a father: Been there, done that. You did the right thing.
Neil
8:55 PM

Extrabio47 said…
Well, Stokes….you remember what Mark Twain once said. “When a boy turns 13, put him in a barrel and feed him through a knot hole. When he turns 16, plug up the hole.” If you’ve never been there, you’ve never been a parent.

I’m looking forward to seeing your rules. I hope you publish them.

And when my younger son turned 12, I had to go through the same crap again.

Zeesh. The fact that the older one is now an attorney and the younger one is a police officer somehow makes those memories all the weirder.