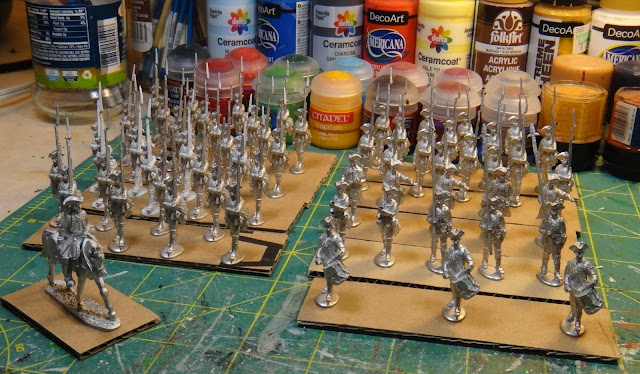 These should keep me busy for the next couple of months.

While work outside mowing, preparing flowerbeds for the summer, and creating Doodly whiteboard animations for use with my courses next fall have kept me busy since the last post, I have managed to get the next infantry regiment fixed to their temporary bases for base-coating and painting.

And I'm trying something a bit different this time around.

You'll notice that most of the figures have been staggered eight to a base.  Indeed, I plan to work on batches of eight to (almost) completion this time around for most of the unit.

You know.  It's just one of those psychological games we play with ourselves to get through a lot of figures in one go.  We'll see how things progress.

A question in the comments section on my possible plans for light infantry formations in the future.  Well, in fact, I already have a battalion of jaeger  (Holger Eriksoon figures painted by John Preece, which were part of the Sittangbad refight in 2006), and two companies of croats.

There is a third of the latter that has been waiting to be painted for some years, so perhaps now might be a good time to do that once the line troops above are finished.

In any case, given the relatively small size of my armies, I have resisted to temptation to add too many light units since we are operating within the mid-18th century.  Fictitious combatants, but  set within a quasi-historical context, although ol' Frederick II and Maria-Theresa seem blissfully ignorant of The neighboring Grand Duchy of Stollen and its arch nemesis The Electorate of Zichenau.

tradgardmastare said…
I very much look forward to seeing these progress and eventually take their place on the tabletop. Perhaps a vignettes of commanders or civilians would ring the changes as you proceed through these. Any thoughts of light troops in the future?
1:12 AM

tidders said…
Those will certainly keep you busy for a while :)

Are you going to add a company of grenadiers ? (they had fusilier cap)
10:16 AM

Extrabio47 said…
It’s going to be fun watching this regiment come into being.

What company provided the miniatures? I don’t recognize them.

Heinz-Ulrich von Boffke said…
Thank you gentlemen! The figures are by Minden Miniatures although I purchased these second hand from a friend in Belgium a few years ago and augmented them with a couple of new packs just recently. Prussian fusiliers with Swedish cuffs is the variant. Consulting several sources, online and books, for uniform details, which don't differ too much from many Prussian infantry regiments. That is to say Blue coats with white vests and breeches and red facings/turnbacks. It is the flags that will be the main difference than to the researchers contributing to Kronoskaf's Project Seven Years War.

Bloggerator said…
Stokes, they will be a fine batch of scoundrels, make no mistake.

Doubtless they will run riot for a few years then be disarmed on the glacis of a fortress under it's guns and then it's men will be distributed to make up the gaps in more reputable regiments.