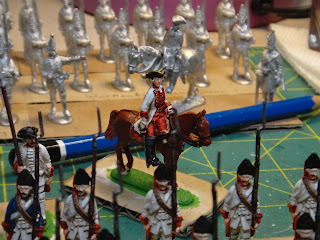 It's hard to beat the richness of oil-based metallics.  The Minden mounted colonel that I worked on yesterday evening.  He ought to look pretty good when finished.


I spent a pleasant hour or so last night, following The Young Master's bedtime, carefully teasing tiny bits of Winsor & Newton, or perhaps Grumbacher, gold and silver oils onto the mounted Austrian officer, who will oversee the composite battalion of Minden Austrian grenadiers.  They, of course, are the fellows in the foreground.

However, I managed to get my seat back into the painting chair last night, and here we are.  A steady hand, despite the usual after dinner infusion of strong dark roast coffee, meant only one minor gaff with the brush, not visible here, that will need to be addressed later.  It is always a relief when the sloppiness demon does not manage to color a painting session with his presence.

By the way, the figures in bare metal glued carefully to temporary cardboard  painting strips in the background are 33 Minden Prussian grenadiers, slated to become -- surprise, surprise -- a composite battalion of blue-coated grenadiers, based on Wurttemburg and Hessian troops of the period (with green and pink facings respectively).  Lengthy interruptions notwithstanding, these Minden infantry paint up pretty quickly.  Much faster than, say, 30 or so cavalry, for obvious reasons.

Fear not though!  I've got a mounted unit in mind for later in the summer and early fall.  I know, I know.  It's a strenuous job, but someone's got to do it.  As I was fond of saying here several years back, the figures won't paint themselves.

Anyway, still a number of small things to do before the current battalion of 30+ figures can be glossed, but we're getting there.  Of course, a list helps, and I've knocked one out on a large white sheet of paper where each item can be crossed off once completed.  I'm aiming for another hour or so this evening although it remains to be seen what the planned brushwork might address.  Stay tuned!

Independentwargamesgroup said…
Good to see you back in the painting saddle Stokes. Games Workshop are releasing a new range of paints and when I saw them I thought of you because they seem to be washes. The reviews were very good and they are issuing a large amount of colours.
4:24 PM

Stryker said…
Stokes, great to see you back in production - I have missed your posts!
8:28 PM

Rob W said…
It doesn't matter how often you paint, just that you paint. Slowly but surely the lead pile will dwindle.
2:06 PM