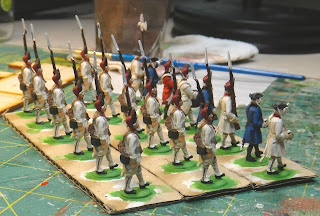 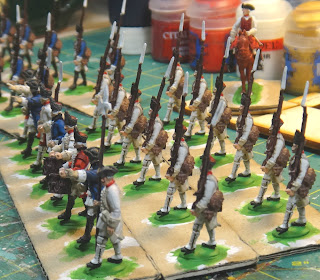 Seemingly endless white washes followed by a feather touch of the bristles, each application holding a small drop of black paint, to the gaiter buttons has yielded a nut unpleasing effect to this company of Hessen-Darmstadt Leibgrenadiers.  I was extremely careful to run the very tip of the bristles across the raised buttons and, fortunately, made very few mistakes that required fixing.  Some days, the stars align just right!


The Young Master's school district, along with many others in the area, has closed and, in a very rare move, so too has Michigan State University and will be again tomorrow (Thursday).  The university has only closed half a dozen times due to winter weather in its history, so you know it's cold.  My sister tells me that a client of hers, who is based in Minneapolis, Minnesota and with whom she spoke on the telephone this morning, mentioned that is was -27 degrees Fahrenheit there.

"Zoiks!" as Shaggy used to intone on Saturday morning episodes of the original Hanna-Barbera animated cartoon Scooby Doo, which my sister and I never missed during the 1970s.  "And I would have succeeded if it hadn't been for those meddling kids!"

In any case, the cold provides a perfect excuse to stay warm inside and apply bush to figures.  So, here is where we stand this afternoon with the current batch on the painting table.  You'll see that I have redone the gaiters and garters on the white-clad Hessen-Darmstadt Leibgrenadiers and carefully dragged bristles of black paint over the gaiter buttons.  I've also repainted the breeches and waistcoats of the related officers red.  Next up, the facings and turnbacks.

I also spent some time this morning, after taking care of some online administrative duties for my cancelled classes, looking through my files, copies of various old prints, I have saved into a folder on my computer desktop, for colorful ideas on how I might paint subsequent units of soldiers.  In particular, I am thinking of additional units of combined grenadiers since 30 or infantry figures at a time seem to go reasonably fast.  Lots of room for color if I base these future units some of the uniforms worn by Wurttemburg toops, admittedly outside the confines of the WAS or SYW, as well as Polish Crown Garde, and a few of the lesser states.  In other words figures painted in yellows, light blues, and reds, to provide some additional color beyond the usual dark blue and white.

In addition, there was a Dutch regiment of the mid-18th century, the Walen Infantry, that for a very short while apparently wore Russian uniforms.  If I can uncover some likely flag possibilities, I might just give them to those Minden Russian musketeers I picked up last fall and call 'em Dutch instead of Russians.  We'll see, but I am getting ahead of myself here.  Let's get the current two companies of grenadiers finished first, shall we?

Peter Douglas said…
Lightweights! We don't close the outdoor skating rinks until it hits -25C, and the schools have never closed in the 20 years we've been in Saskatchewan. My daughter's first snow day was her freshman year in university - when her residence room was across the parking lot from her classrooms.

Steve J. said…
Hope you don't suffer too much in this extreme cold spell, pictures of which we've seen on the news in the UK. Stay warm and have fun indoors.
3:49 PM

Der Alte Fritz said…
Was -24 Fahrenheit Wednesday morning in Chicago and we had a HIGH temperature of -15 Fahrenheit today. Thursday morning will be -27 Fahrenheit
8:23 PM

tradgardmastare said…
The Walen infantry sound really interesting! Keep warm and plan some units, perhaps create a minor Duchy’s force on paper to come back at a future date.
Alan
1:38 AM

Independentwargamesgroup said…
Be careful your brushes dont freeze Stokes.
2:14 AM