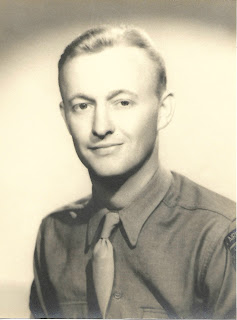 My late maternal grandfather, David Lewis Stokes, the subject of this particular post. 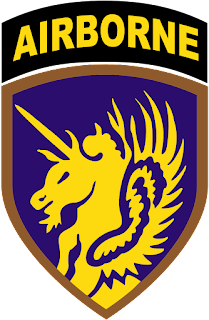 The shoulder patch of his unit, the long defunct U.S. 13th Airborne Division.

This past Wednesday -- January 9, 2019 -- would have been my maternal grandfather's 102nd birthday.  Hard to believe since the image of him that I carry in my mind is of a tall, blond, soft-spoken small town North Carolina boy, who seemed, when I was young, to be as tall as an oak tree and strong as an ox.

Like so many of his era, Granddaddy was involved in the Second World War, the European Theater in his case.  Initially an anti-aircraft gunner in a Pennsylvania National Guard unit stationed on Curacao where he defended the Dutch oil fields, he later transferred and trained as both a paratrooper and glider-borne infantry.  Scary stuff when one considers how so many similar units of troops fared during WWII when facing the enemy.

Arriving in Le Havre, France during the winter of 1944-45, his new division, the 13th Airborne, never quite saw combat though it was slated to be dropped into Germany and, later, Japan.  Luckily, neither ever happened for a variety of reasons, and the men were shipped home to the United States in early 1946 where the division was demobilized.  Unlike countless others, he came home relatively unscathed.

Most of my Grandfather's history as a soldier I know from my own reading about his division (I have his division history book on my shelf), or by piecing things together that others in the family have told me over the years.  Granddaddy really never talked much about his own wartime experiences, with the exception of  a few funny sergeants' stories.  I once asked him, though, about a fellow in the division who was killed in a training accident, and all my grandfather said was that he had been very close by when it happened, that they had been friends, and then the subject was changed.  Somehow, I knew, even at the age of six or seven, that this was something he preferred not to discuss, and I didn't bring the subject up again.

By and large, my grandfather and I had a good relationship, and I idolized him as a boy.  He was basically a gentle soul, who would have given you the shirt off his back if he thought it might help you somehow.  And he rarely said anything negative about anyone, or anything.  When he did, the remark was usually so understated and/or oblique that it in no way led to hostility or hurt feelings.

Once, when I was about 22, with very long, puffy 80s hair, Granddaddy and I were out together running errands for my grandmother.  We stopped by a local supermarket bakery to pick up a cake she had ordered, and the lady behind the counter at one point said to my grandfather, "Well, Grandpa, what do you think of his hair?"  Pausing for a beat or two, my grandfather chuckled quietly and replied, "Oh, let's just talk about Jesus," which elicited laughter from all three of us.

Granddaddy and I remained close until the day he died in mid-July 2006, the night before my wife, The Grand Duchess, and I returned home from our honeymoon in Minnesota and The Dakotas.  There was a brief message from my mother on our telephone answering machine on the afternoon when we got in asking me to call her.  Since he had not been well enough to attend our wedding three weeks before with my grandmother, I realized at once that Granddaddy was gone.  In the time since, not a day goes by that he doesn't cross my mind at some point.  And often more than that.


In hobby news, things are to the point where I can start all of the gold lace on the 'Soubise and Aide' vignette over on the painting desk.  For this task, I'll use oil-based gold paint applied sparingly with pretty dry bristles to avoid mishaps.  Of course, you've got to be careful, but there is no getting away from the rich brilliance of oil-based metallics.

I've also sorted through the drawer of lead this week, selected, and tacked down to temporary cardboard painting bases enough Austrian infantry to create a 60-figure+ regiment of Austrian or Reichsarmee troops as well as a 30-figure+ combined battalion of grenadiers in bearskins, according to the organizational guidelines laid out on Charge!  Or How to Play War Games.

I'll tackle the small combined grenadier battalion first I think.  It makes sense to start with the smaller unit right now given the usual demands of work and family life.  Once both of these units are finished, I'll return to the cavalry later in the year and paint up some two-squadron regiment or other.  Probably some Uhlans de Saxe, or maybe some more Saxon curiassiers, but who knows?  At this point, that's putting the cart before the, ahem, horse. 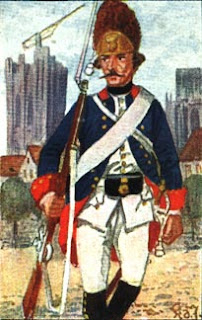 Two attractive possibilities for the respective halves of the planned combined grenadier battalion: Hessen-Darmstadt's Leib Regiment and Kurkoeln.  Half the fun of planning what to paint comes, I think, from looking through loads of old illustrations in books and online.  If there were a Ph.D. to earn somewhere in uniformology. . .

Independentwargamesgroup said…
My father rarely talked of the war. He served with the Durham Light Infantry in Egypt and then Italy and only spoke very occasionally and usually when he'd had a drink, about the experience. It was understandable. I always remember my friends father who walked with terrible difficulty, and rarely acknowledged anyone. He had been a prisoner of the Japanese for four years and returned a broken man. I have nothing but admiration for these people.
9:55 AM