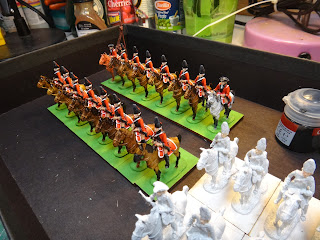 The first squadron of 14 plus the two-figure regimental staff of a colonel and another trumpeter (riding a grey).  Funny how, as Wellington Man mentions in his most recent blog post this morning, cavalry units look pretty awful until you begin addressing the horses in earnest.  It is at that point that everything begins coming together.  Getting there is always a struggle however where cavalry is concerned.


Spent a couple of pleasant hours early yesterday afternoon applying thinned (with Liquin Original) Winsor & Newton alkyd oil 'Ivory Black' carefully to the manes, tails, and lower legs of 13 bays and one grey horse.  It was during this activity that I began to think, "These might not look so bad after all."

Still lots to do before this first squadron and small regimental staff of two are finished, and I am a bit behind schedule here (the end of July is looming), but the brushwork on the figures seems to be falling into place.  Today, I'll start with the manes and tales on the two chestnuts in the squadron (a nice dark brown I think), and then it will be time to apply the white markings to muzzles and fetlocks before I finish by painting and/or cleaning up the actual hooves.  If there is time, I'll go back and apply a bit of thinned Ivory Black to the muzzles of the bays.

I find that a fairly thin (but not runny) glaze of black over tails, manes, lower legs, and muzzles on bays, which are already brown underneath, allows a bit of that same brown to show through, and yields a not unpleasant  result.  A very understated form of highlighting and shading if you will without everything looking just pure, dead, dull, black hole in deep space black if that makes any sense.

A trained artist with a thorough grasp of color theory and painting technique could probably explain that better, but ol' Mom (along with Stepdad) is busy this weekend purchasing another house, and she has never been one for all of this social media nonsense as much as she is into the latest versions of her iPhone and iPad.  Parents, eh?  I'll have to raise the question at another time, I fear, to get her considered opinion on the matter. 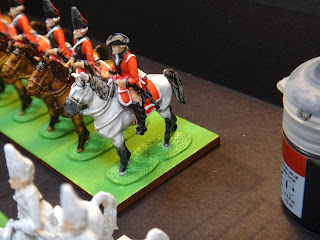 The lone grey, in particular, is shaping up somewhat nicely.