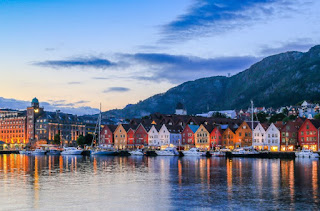 Not a hobby photograph, or a Waterloo painting, this morning, but a summer evening photo of the old Hanseatic wharf in Bergen, Norway, a place where I once spent quite a bit of time as a (graduate) student in 1990, '98, and again in 2000.  Haven't been back to the city in 18 years, but the place is amazing on clear summer nights when the sun hovers on either side of the horizon and time seems to stand still.  Norwegians know how to make the most of their summers. 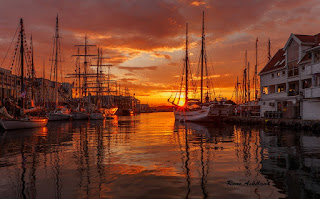 Another wondrous summertime late-night shot of the waterfront in Bergen.  Hobby "weather" forecast the remainder of the summer?  Mostly sunny.


Just to show how things stand in my summer challenge to myself:


Still feeling good.  The will to paint is moderate to high.  A strong front of renewed hobby enthusiasm is pushing in from the west, which should spur yours truly to sit down at the painting table this evening and plow into a squadron of those Wurttemberg horse grenadiers.  Ahhhh. . .  Hear that?  The sound of Summer and, for the moment, relatively unstructured free time.

Our summer evenings here in Mid-Michigan are not quite as spectacular as in Norway, but right now dusk lasts until almost 10pm on sunny evenings, which I'll take.  Quite happily.  The flowering perennials in the garden beds, lengthening shadows, chirp of crickets, and numerous little bats that begin swooping around just before dusk to catch insects make it relatively easy to forget, for a few minutes at least, the cares of the world.

Below are photographs of the newly finished infantry standards and standard bearers posing with small drafts of their respective regiments to provide a better idea of how everything now looks.  Enjoy!


P.S.
My flags are printed out on plain white typing paper and have a slightly small square or rectangle of aluminum foil glued inside the two halves to help everything keep its shape as the glue dries.  Almost everything, except for the tiniest, most intricate detail is then painted over in hobby acrylics and given a highlight or four in the case of whites and reds.  If you carefully apply these pretty wet (but not runny), they'll blend more effectively with the preceding shade(s) of color. 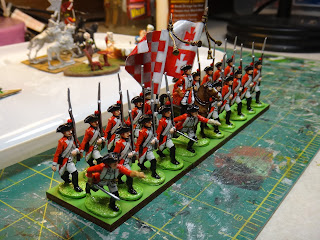 My generic Hanseatic Regiment (based on period troops from Hamburg, Bremen, and Luebeck) marches beneath historic town flags from Bremen and Elbing. 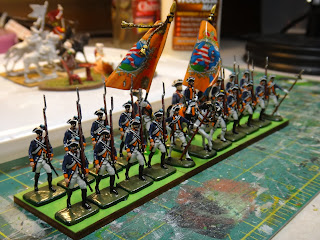 The very first unit ever painted, the 1st Musketeers, from way back in the summer of 2006.    The Minden standard bearers, while taller, stick our much less glaringly than did the original MiniFig flagbearer.  The standards are Hessian, which only makes sense given the familial ties between Stollen and the Hessian territories far to the west on the opposite side of Brandenburg-Prussia and the Saxon Duchies. 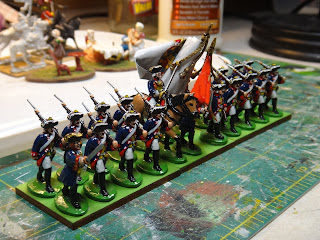 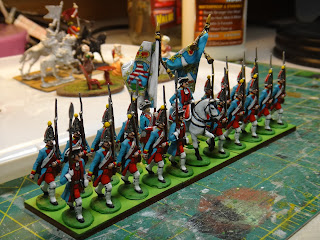 Stollenian Leib Grenadiers, a Christmas gift from the Grand Duchess in December 2006, again with Hessian standards, which I find more eye-catching than most contemporary Prussian infantry standards.  It must be that red and white lion. 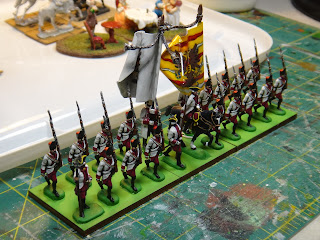 The fourth unit painted, back in 2007, the Ermland Garde, once again with historic flags, this time from one of the Reichsarmee units whose name escapes me at the moment. 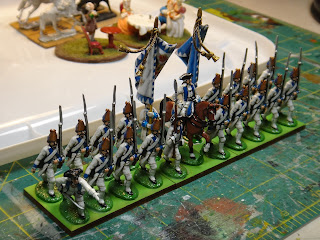 Last of all, Flickenhoffer's Fusiliers, again with historic standards actually carried by another unit (The Blau Wurzburg?) that was part of the Reichsarmee.  You just cannot beat colorful flags!  They bring so much to a unit of model soldiers, even those with pretty basic paint jobs.

KEV. Robertson. said…
Very nice Regiments - great work there- the figures and standards are excellent- thank you for showing us. Cheers. KEV.
8:29 PM