A Summer Painting and Modelling Challenge to Myself. . .

The 'Ooh, You're So Awful' vignette from Eureka Miniatures, which will go will with all of those frolicking aristocrats that I painted several years back.  My figures have had their two coats of white gesso and are already attached to a couple of circular permanent bases.  Fleshtone and a peach color for the lady's dress this evening.  More if that goes well.  Maybe the kitchen maid's more somber attire?


Tomorrow is June 1st, and I am almost done with quite a bit of gardening here, tender lower back notwithstanding.   Mostly various flowering perennials to attract bees, butterflies, and hummingbirds for the Young Master in the front and back yards following the construction of a wonderful screened back porch (Michigan is extremely buggy most summers thanks to low-lying, swampy areas).

So, time once again to begin thinking in earnest about more toy soldierly things, Grand Duchess and Young Master permitting.  I still don't know how the late Donald Featherstone managed to indulge and write about his hobby to the degree he did along side a career and family life.  Any ideas? 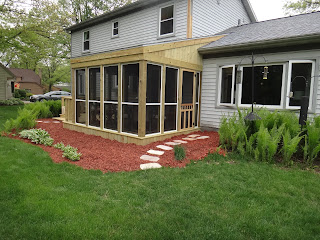 The new back porch in question.  It replaces a peeling, rickety, and improperly constructed party deck.

Returning to the point at hand, lots of unfinished odds and ends here in Zum Stollenkeller that have languished for some time as real life has intervened rather cruelly over the last 10 months or so.  High time, then, to address each in turn as well as turn my attention to a couple of small building projects that have been on my mind for a year or so.

Besides adding those new Minden Austrian and Prussian standard bearers (with newly painted flags) to the various existing line infantry units that have waited so patiently for so long, here are the various projects that I am challenging myself to complete before the end of August when the Fall 2018 semester commences.  It is, you will probably all agree, a battle of wits against oneself.  Anyway, here's the Summer Hobby To Do List:

1)   Add the Minden replacement infantry standard bearers to their respective regiments.
2) Paint the Eureka 'Ooh, You're So Awful' vignette.
3) Paint a two-squadron regiment of Wurttemburg Dragoons.
4) Construct a North German red brick church resembling the one shown in this post.
5) Construct a half-timbered warehouse like the one show in this post.


Only five small related projects to complete in just three months.  'Only.'  But can he do it?  We'll see.  My hobby track record recently has been pretty abysmal for much of the last year, so I must admit to a bit of skepticism myself.  However, I'll give it the ol' college try and see how things go.  Fell free to jeer as loudly and as often as you want to should I fail to meet my September 1st goal.

I've also got a couple of small writing projects on the go this summer, one hobby related, and one not, but these will be addressed during normal daylight hours, while the toy soldiering is largely an evening pursuit.  And there are a couple of small solo games I hope to squeeze in as well, one of which relates to one of the aforementioned writing projects.  Lots going on and much ado about nothing during the next three months then.  Watch for semi-regular, though not blow-by-blow, updates here to see how I fair.  Ready?  Set?  Go! 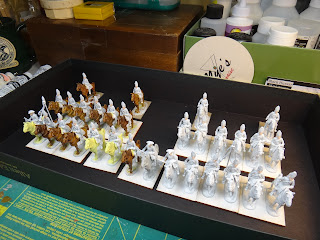 A two-squadron regiment of RSM95 horse grenadiers started in July 2017 that have languished since. 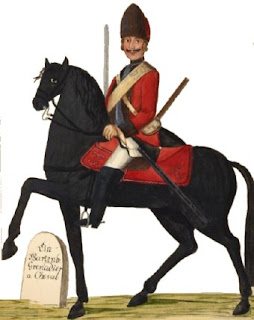 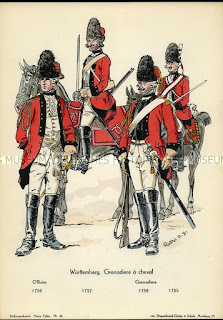 A couple of illustrations showing what the planned regiment will look like, more or less, once finished.  Who among us can resist cavalry in red?  Not I. 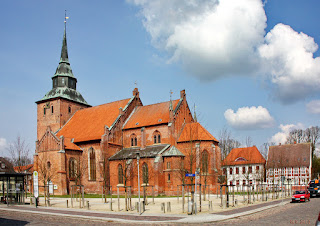 A brick church in the small town of Boizenburg, Germany that caught my eye a year ago while doing online research for the Baltic German town center that I constructed and wrote an article about for the 2018 Wargamers' Annual.  Self-promotion and all of that you know.  Yes, what an irritating so-and-so I am! 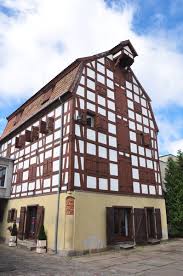 A lovely old half-timbered warehouse in Klaipeda, Lithuania (ex-Memel) that also caught my eye during last year's building boom.  Both structures should fit in well with the existing Baltic German town center.  Who would have thought that model buildings would be so much fun to construct?

Der Alte Fritz said…
It looks like you did a little bit of modeling on that back porch too.

Heinz-Ulrich von Boffke said…
The back porch, I can, sadly, take no credit for. The Grand Duchess and our contractor came up with the basic plan, which was modified a bit for the space and took only about 2.5 weeks to complete. Just in time for warmer weather given the chilly April and early May we had here in Mid-Michigan.

Independentwargamesgroup said…
Stokes,
I've always found it fatal to set targets and deadlines. Invariably they are never achieved.Perhaps you are of sterner material and can use Germanic discipline to complete the tasks you have set yourself. As for the buildings have you considered the Faller range of plastic buildings. Im pretty certain they do something very similar to what you are wanting to make.I would check out E Bay and good model train companies.The scale is a little out, but they are very nice building and they are a German company. As for Donald Featherstone finding time, I remember from his editorials in the Newsletter he was always complaining that there was never enough time for his projects although he did tend to work into the wee hours and also paint whilst watching television although God knows how he did that and not make a mess of his figures.
1:14 PM

Ed M said…
Just starting to get oriented on the summer hobby scheme as well. Your post provides a timely prompt. Enjoy the porch, and good luck with your hobby schemes.
6:59 AM