The Hospital of the Holy Spirit Takes Firmer Shape. . . 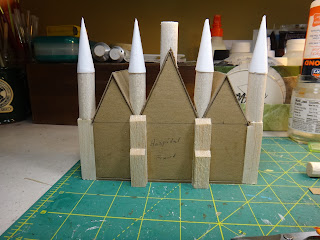 Here is where things stand at the moment with the front half of  the hospital model.

Still whittling away at  the mid-18th century Baltic German town center.  Balsa chimneys, a few more dormers, and some stairways were added to most buildings over the weekend.  I've also worked out how to approximate the actual facade of the Hospital of the Holy Spirit as you'll observe above.  I'll never sneer at the scrapbooking and crafting set again.  There are many good videos by them on Youtube about how to make paper cones.  Now, all I need to do is figure out how to approximate the hexagonal cupola at the base of the middle, slightly more slender and taller spire.  I also manage to find a shade o acrylic craft paint last week that should nicely approximate the verdigris of aged copper if I tone it down a bit with some light tan before applying it to the model above as well as the spire on my rathaus as featured in a previous post last week.

The bases of the two outside towers also need a bit of, well, buttressing before everything is finished, and I need to plug a few gaps with some acrylic spackling/filler compound as the late Ian Weekley used to do on his models.  Just about ready, then, to begin painting the dozen -- Yes, one dozen! -- town center buildings once this particular structure is done.  I got to ten, you know, and it just seemed to make sense to add a couple off plainer houses to make an even dozen just for a bit of variety along the skyline.  Still trying to come up with a name for the town that reflects the German-Polish-Lithuanian nature of the area in which it, and indeed the entire Grand Duchy of Stollen campaign area, is supposed to be located. 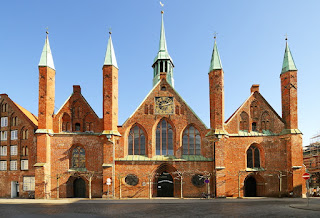 Here is my point of reference, the actual structure in Lübeck, Germany, which dates from the 1200s I believe.  I am sorely tempted to add the rest of the complex (not shown here) at a later point since I've come across a couple of rather nicely detailed plans of the actual hospital online. 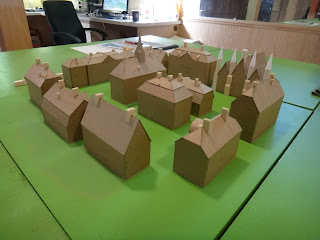 One view of the town center, showing one permutation of the various buildings that I've cobbled together during the last two weeks. 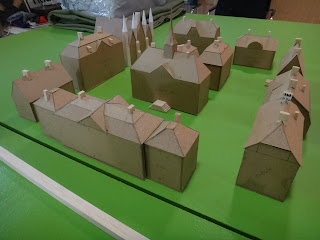 And the same, seen from another angle, showing the stairways that I've attached to the rathaus and one of the two most recent structures at the upper right o the photograph.  The other house at the let center also features a low starway on its front, which can't been seen here.

marinergrim said…
Very impressive for the tabletop and a great reward for the hard work you've put in.
1:54 AM

The Good Soldier Svjek said…
That is a very impressive town you have there sir ! , I admire your hobby skills , Tony
2:04 AM

Prufrock said…
Those are going to look fantastic. What a great project!
2:15 AM

Conrad Kinch said…
Great stuff Stokes - I'm always impressed by chaps who can pick a specific real world building and then follow through with a miniature version.
2:15 AM

The Border Prince said…
I have a few suggestions:

Aestindorf: After the Aesti, the ancient Roman name of the Prussians.

Deutchenburg: Because it is a town populated mainly by Germans in a quite Slavic area.

Marienstad am Swichen: A riverside center of trade, religion and learning.

Rittersburg: A town that grew up around an old fortress of the Teutonic Order.

Siegfreidsburg: A town founded by (and named after) one of Irwin II Amadeus' ancestors ago.

tidders said…
Coming along nicely
6:51 AM

Independentwargamesgroup said…
Stokes,
well done, the buildings are going to look brilliant.
7:40 AM