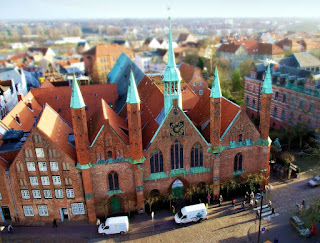 The very old Hospital of the Holy Ghost in Luebeck, Germany, which served as an old age home into the 1970s.  The Grand Duchess and I toured it in June 2009 when we stayed in Luebeck for several days.  My planned model will feature just the main steeply gabled front section, with bell tower and clockface but without the four decorative gothic spires, and an abutting rear section.

Light is at the end of the tunnel at last!  My classes for the university semester have concluded, and the term ends today.  While there is still a committee project to complete, a paper to write, and a conference to attend where I'll present it, life is returning to some small semblance of normality here at Totliegh-in-the-Wold.  By this time next month, I hope to be back up to my elbows in soldiers (finishing those replacement Minden standard bearers with new flags) and the next side project, which will involve. . .  You guessed it!  town buildings.

In connection to a planned article, I have agreed to produce a small series of six or seven underscale town buildings.  So, I have spent the few occasional spare moments in the last month or two combing the internet for photographs of suitably 17th-18th century looking town buildings to provide inspiration.  The buildings envisioned include: 1) a modest town hall (Rathaus), 2) a customs house (Zollhaus), 3) a small barracks (Kaserne), 4) a school (Lateinschule), 5) a hospital (Hospital. . .  more commonly Krankenhaus), 6) a half-timbered house (Wohnhaus), or two with interesting roof lines to masquerade as inns, taverns, or what have you.

These should be some of the most ambitious undertakings yet given the variety of half-hipped and mansard roofs with their odd angles. . .  especially since I was no good at all with geometric proofs and the like way back in high school.  I still wake up screaming in a cold sweat from time to time much to the neighbors' collective chagrin.  Naturally, I'll simplify a few things here and there to make the planned town buildings a bit less fiddly during the construction phase, and more durable once on the table, but those shown here will serve as guides for the planned scratch-built structures.  Details will be added in my usual way with a few bits and pieces of balsa wood plus some more careful painting once everything has been assembled and given a basic coat of paint.

Finally, I managed to find some small model-maker's clamps -- from Micro Mark -- The Small Tool Specialists -- designed to hold thin wall pieces tightly at precise right angles while the glue to cement the two pieces together is applied and dries.  There is also a small model maker's square coming from Amazon to help cut walls and roofs at more precise 90 degree angles.  Eager to see how both help with the forthcoming buildings.

On a different, yet related note, Grand Duke Irwin-Amadeus and his man Hives are currently expecting the arrival of Freiherr Woldemar-Francois de Changement, along with his wife Lady Solange, who brings diplomatic tidings from distant Franconia to discuss, among other things, a possible loan that might help fund the Grand Duke's plan to supply every Stollenian gentleman with three new pairs of English-made calfskin dress shoes, a pair each in black, brown, and oxblood.

Ok, time to take a deep breath and dive beneath the waves of work yet again.  We're not quite there yet. 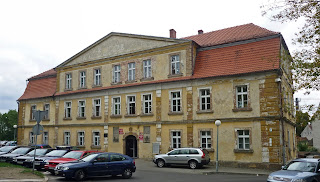 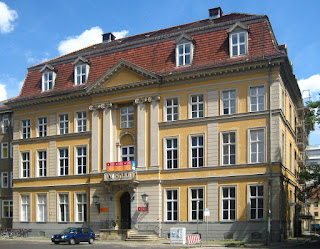 The old Palais Podewils in the Mitte section of Berlin, Germany. 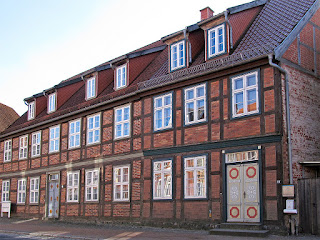 An old house in some small North German city, town, or dorf.  I forget to note those details when I saved the image into a desktop folder on my computer. 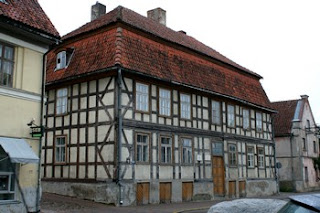 A second old half-timbered house, this time somewhere in a formerly German area of Lithuania. 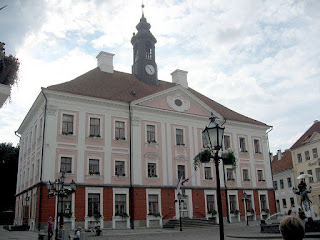 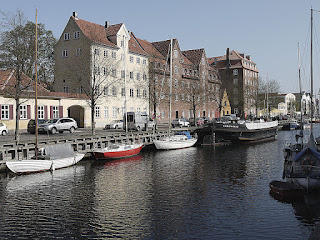 An old barracks on the outskirts of Copenhagen, Denmark. 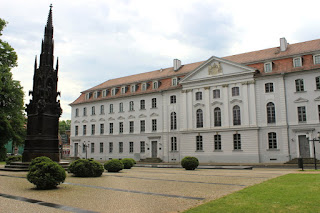 The main building of The University of Greifswald in -- surprise, surprise -- Greifswald, Germany. 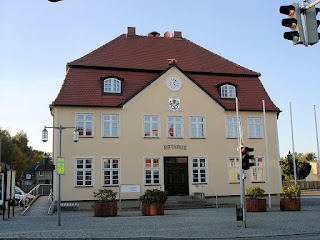 The old town hall in nearby Rostock, Germany. 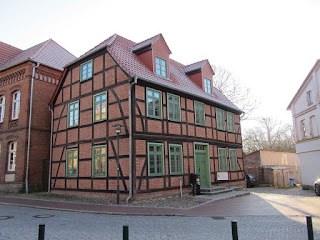 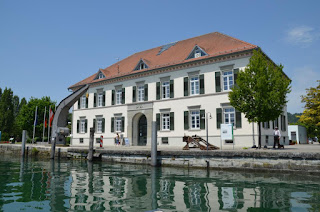 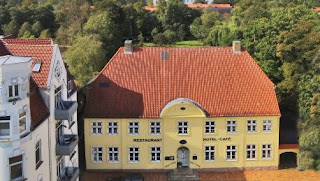 And the old customs house in Schleswig.

Pierre le Poilu said…
On the subject of oxblood shoes. I was in the local shoe shop when I saw a very fine pair of oxblood ankle boots. I asked the cobbler "How much are the oxblood boots?"

The reply - "130 pounds. That's not oxblood. It's burgundy. We're not allowed to call it oxblood anymore because it doesn't contain any oxblood. A new EU rule."

Simon Millar said…
Great to hear that you'll be able to gat back to the toy soldiers and buildings. I really enjoy looking for inspiration for buildings and visit the various German Open Air Museums. I still have my guide to the Westphalian Open Air Museum near Detmold from 1991 which is full of inspiration.

Heinz-Ulrich von Boffke said…
Thank you, men! I spent an hour or so Sunday making full-scale preliminary sketch "patterns" for several of the planned buildings, which will have a footprint of around 2.5 inches wide by 5-7 inches long depending. Vastly underscale, but they should look fine once painted and on the table grouped into a town center, or sprinkled amongst other earlier structures to form a few smaller villages or tiny settlements.

Sadly, in the U.S., the term 'oxblood' shoes causes terrific confusion judging by the faces, in shoe stores mind you, when I've used it (shakes head sadly).

Painted Soldier said…
Wow, I can't wait to see the finished town.
1:24 AM