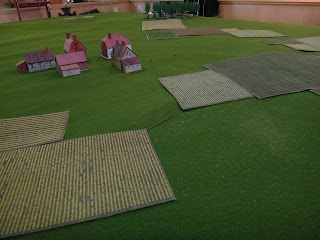 Looking past Hasenpfeffer village to the northwestern corner of the eventual battlefield.

You have to strike while the iron is hot as the saying goes, so I got busy following the Young Master's bedtime this evening, brought my mug of coffee back down here to Zum Stollenkeller Mk II, and set up for the next battle in my campaign.

This time, it will be Charles Grant's "Holding Action (1)" from Scenarios for Wargames (pp. 14-15), eventually laid out and fought on a 12' x 6' table.  Delusions of grandeur and all that you know.  I'll reduce the suggested forces ever so slightly to fit what I have.  There might even be a couple of units making an appearance that have not appeared on the table in a few years.  I'll also use a slightly modified version of Donald Featherstone's rules as presented in Battles with Model Soldiers.  It should be good fun.

Here's the situation.  On the run after his shattering loss at The Battle of Doltz, General Phillipe de Latte must fight a holding action against the pursuing Stollenian army, once more commanded by that mid-18th century posterchild for Pepto-Bismol, General von Bauchschmerzen.  'Bauchschmerzen' means tummy troubles or pains in German by the way.  Ah, the unmitigated joys of being married to a German speaker!

Not quite sure when the next battle will actually commence given my level of activity and occupation with student essays over the next couple of weeks.  About 130 two to three page essays from three courses, so do the math.  Sigh.  Well, it pays the bills and allows me to indulge my hobby after too many rather lean years, and there are certainly far worse things in life.  Perhaps the planned battle can function as a sort of carrot at the end of a stick?  You know.  As a reward for finishing with the essays on the other side?

In any case, I'm getting the hang of using these four Woodland Scenics Ready Grass Mats, minimizing the straight edges that must be disguised.  However, the Hotz felt fields really help here, and I will very probably order a set or two of 2" felt roads to help disguise the rest.  Hotz products go very well with the grass mats and stay put rather nicely once placed on top of the former.  As mentioned in a post during August, I don't know what in the world took me so long to step up my terrain game, but you live, and you learn.  And now I am off to bed.  Goodnight all! 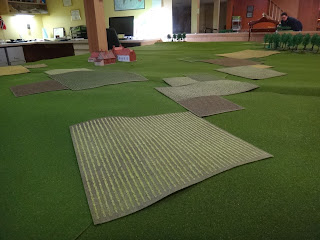 The view over the early Autumn fields to the southwest. 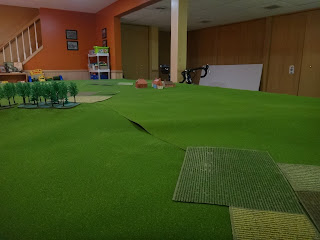 And again, this time looking to the southeast.  There may, or may not be Hotz roads in place by the time the battle happens. 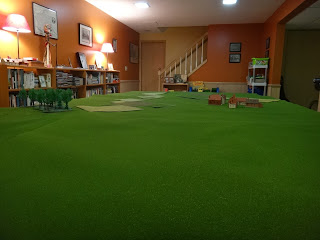 A view over the gentle ridges toward the eastern edge of the field. 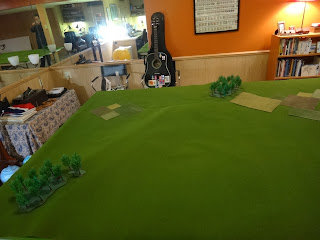 Here's an Orson Wells inspired crane shot that gives a better impression of the ridgeline the runs from the southwest to the northeast across the western end of the battlefield. 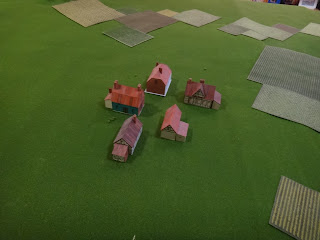 And another crane shot, this time of Hasenpfeffer village.  Look very closely, and you'll see Charlton Heston and Janet Leigh speeding away from the scene in a Cadillac convertible.

The Good Soldier Svjek said…
Ah! the anticippation of a new game!, Tony
3:08 AM

Steve-the-Wargamer said…
I also recommend a visit to your nearest carpet emporium to check out their carpet tiles.. go for green, muddy brown, olive, etc... Cut to shape they make excellent fields and other scenic points to disguise the billiard table effect...
5:36 AM

Peter Douglas said…
Lovely looking table and hobby room. Great to see a guitar in the background too!

I great great mileage from visits to the fabric stores, since my wife quilts there is plenty of opportunity in our house. In Canada, a membership gives you access to the specials. I'll ain't until felt (ground mats) and outdoor vinyl upholstery for sea mats and water features.
Looking forward to the game. Marking sucks but it beats working for a living!
Cheers, Peter
10:30 AM

Gallia said…
The thought occurs I might do a solo battle.
Thank you for the inspiration.
Respectfully,
Bill P.
11:57 AM

marinergrim said…
Looking forward to this one as well.
2:09 AM