The Sachsen-Hildburghauen Contingent Is Done! 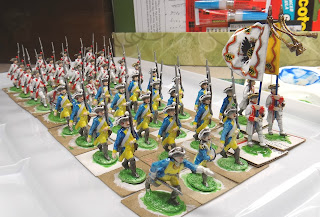 Here is one half of the monster 80-figure regiment -- the now finished Sachsen-Hildburghausen contingent is in the blue coats -- with its second coat of acrylic gloss all dry.

Made the big push to get things wrapped up and apply two coats of Liquitex acrylic gloss varnish to the Sachsen-Hildburghausen boys yesterday (Saturday) afternoon and evening.  That went so quickly that I also took the opportunity to apply a second coat of the stuff to the 19 figures, completed at the start of March, at the conclusion of a friendly painting challenge that several wargaming friends and acquaintances and I scrambled through in February.  You'll observe a hastily taken photograph above of this half of the regiment.

Today, once I have made a Sunday breakfast for the Grand Duchess and Young Master, I will begin permanent basing of the entire 80-figure unit!  This will be fun because I have a bunch of laser-cut Litko bases which should really smarten up the various contingents comprising my version of the Ernestine Sachsen Regiment of Infantry.  Why I waited so long to purchase and use professionally made plywood bases and continued to cut my own from thick card is hard to fathom, but there you are.  About as sharp as a mashed potato sandwich as my maternal grandparents used to observe wryly.

I cannot recommend laser-cut bases highly enough however, and there are a number of companies around the globe at this point, besides Litko, that produce similar in plywood, MDF, and/or plastic in various possible thicknesses.  I've even set aside a few of the smaller so called terrain bases, which are completely amorphous shapes, to use as staff vignette bases when I get back to painting a few mounted generals and ADCs.  All terribly convenient and, frankly, much nicer looking than anything one might cut by hand unless you channel Da Vinci, or possibly Giotto. 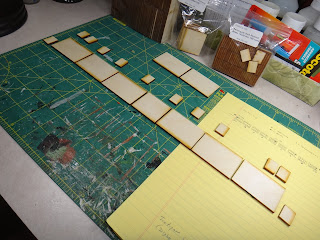 Here is a photograph of the waiting bases.

My planned basing scheme, shown above, is based on careful study of various battalion diagrams in Christopher Duffy's The Army of Frederick the Great, the base organization and dimensions stipulated by the late Peter Gilder in his In the Grand Manner rules, and the unit organizations suggested by Young and Lawford in Charge!  Simply put, four companies of 16 privates, one officer, a musician, and an NCO each.  The drummers will be placed in pairs on each flank and two of the four company officers will be based singly to take up their places in the front rank on either flank.  NCOs, along with the drummers, will make up a third rank when the battalion is in line (I've tossed in an extra pair of NCOs). The mounted colonel, standards, adjutant, and an R.S.M.  will occupy the slightly smaller base in the center of the battalion. It should all make for a suitably busy tableau once everything is done, yet moving the unit from here to there in games will take appreciably less time than when figures are ALL left as unbased singletons.  Nice in theory, but. . .

Anyway, watch for another photograph or two late tonight once everything is all done.  Then, I've got a 30mm version of The Hundred Acre Wood to whip up.

The Good Soldier Svjek said…
Laser cut bases are a gift from the Goddess of wargaming ! , great looking regiment as well , Tony
2:15 PM

Stryker said…
Wonderful work Stokes - I look forward to seeing them based up!
5:39 PM