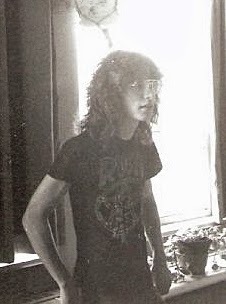 The young, long-haired Stokes, referred to occasionally here.  I was about 17 (Thank you Janis Ian), and I think the photograph dates from April or May of 1984.
Not sure which one of us looks more wilted here, the potted plant, or yours truly.  In any case, there are not many photos from those heady days of the 1980s that have been digitized, but here is some evidence that might be used against me in a court of law.

The curl is natural, assisted only by a few spritzes of Vidal Sasson hairspray (what was I thinking?), although it looks from this photo like the poodle-like souffle of hair on the crown of my head had fallen, or been mashed, by this point in the day.  Look closely, and you'll also spot a RUSH concert t-shirt.  The Canadian band was a favorite of my drummer buddy Donny (we still talk on the phone once in a while), a year ahead of me, and I admired the playing of that band's bass and keyboard player Geddy Lee a great deal at the time.

This was also the time, more or less, when I had the bright idea of attempting to paint up 15mm corp-sized Waterloo-era forces.  Blame the late Paddy Griffith and his book Napoleonic Wargaming for Fun.  Sadly, and despite painting sporadically for the next 20 years, the project never quite came to fruition due to life, college, graduate school, and so forth.  I really must figure out what to do with those boxes of painted and unpainted 15mm figures one day!

El Grego said…
An excellent choice of attire, but hairspray??
8:42 AM

Mad Padre said…
We all have those pictures somewhere, and they all prove that 1980s eyewear was deeply misguided.
At least you get extra marks for the RUSH Tshirt.
8:42 AM

Unknown said…
My boys (all in there 20's) have found various pictures of me circa 1975 when I was 18..long hair, cheese cloth shirt, flairs and aviator sun glasses. As you can imagine the hilarity at my expense tickles them pink! As I say to them, today is all imitation...we were there.

Fitz-Badger said…
There was a period of time (from about junior high through my 20s and even into my 30s) where I assiduously avoided getting my picture taken. No high school yearbook photos, no family photos, and very little else other than ID photos. I still don't get my picture taken often, but don't really try to avoid it these days. It's more a matter of circumstances - it's not often anyone tries to take my picture.

Yes, I did have my long hair days, days of beards, uncool clothing, etc.

Gallia said…
Stokes,
You could raise forces for the late 1600s inspired by your long hair.
Bill
7:46 PM

Jim Duncan Wargamer said…
Here's me in the 70's.