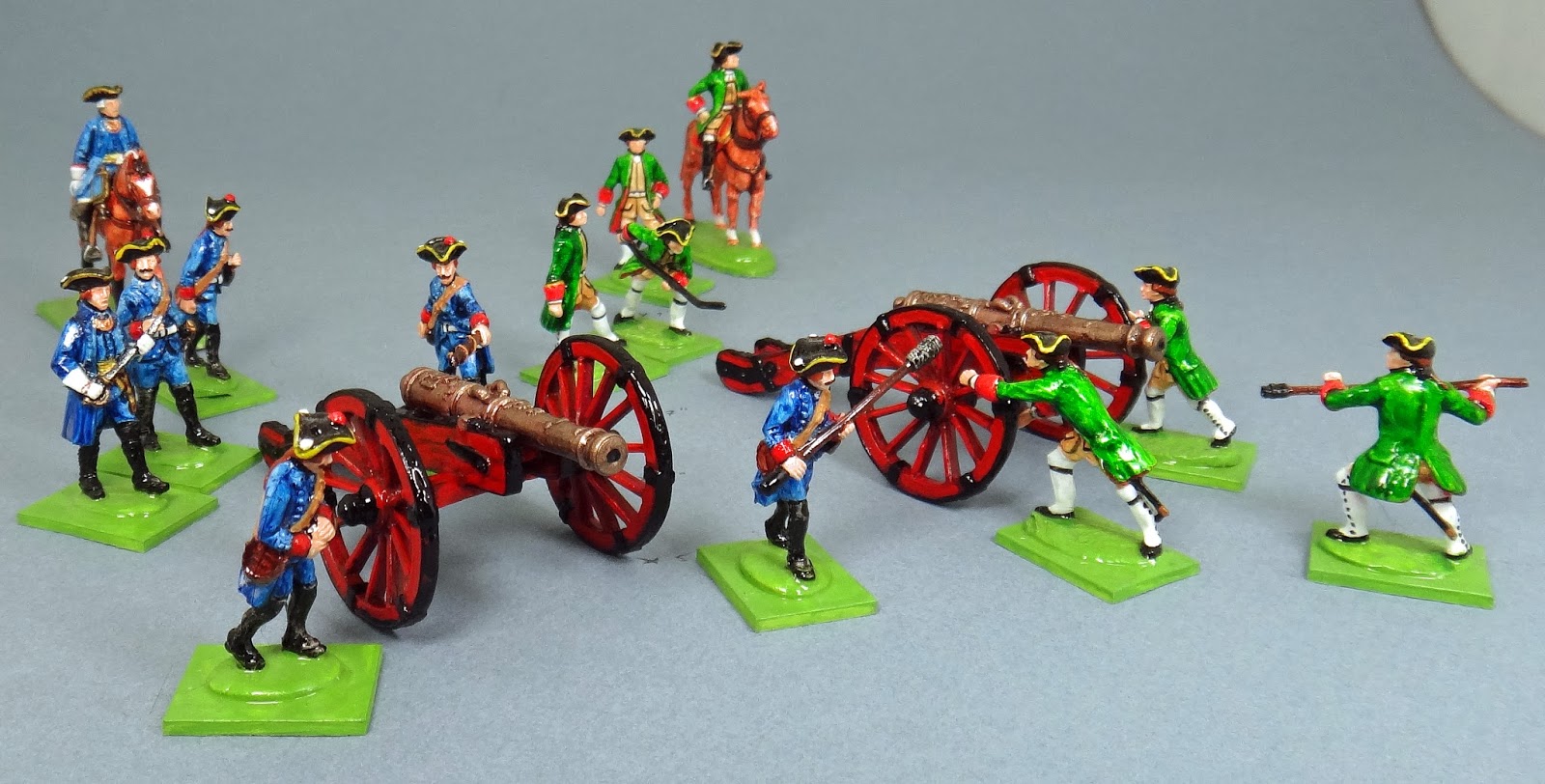 Only about two years in the painting. . .   The Minden and RSM95 gun crews, painted as Palatinate and Saxons respectively in 2012, were finally issued with their guns (purchased well over a year ago) this weekend. . .   Two massive Swedish 4-pounders by Fife & Drum.  I'm already planning to replace the Minifig guns in two other batteries with other Fife & Drum pieces, which are the new benchmark for artillery models as far as I am concerned.

Much afoot here at Stollen Central this past weekend.  Painting, rearranging things so that I could once again set up my 10' x 6' table, and ridding myself of five (yes, FIVE) massive black garbage bags of styrofoam sheeting and old hills.  Ala Charles S. Grant, I will replace these with much thinner sheets of foamcore board, which will provide less dramatic, more gentle slopes for the armies of Stollen and Zichenau to fight over.

At the same time, I've gotten rid of what was beginning to seem like a genuine fire hazard, so I'm relieved to have it out of the house.  And hey, since I never used most of the styrofoam sheeting in almost six years of residence at the current Stollen Central, there seemed little point in saving the stuff any longer.  Packratia isn't pretty.  It's that embarrassing and hush-hush social disease from which many wargamers suffer in silence.  Packratia is no laughing matter and needs greater public attention if we are ever to eradicate it.  Packratia can come from anywhere and strike at anytime.  So, you must keep up your guard against Packratia at all times.

That attractive female neighbor across the street, who calls on the telephone one evening and coyly asks if you want to drop by to pick up a box full of  rubberized horsehair leftover from when she restored her antique fainting couch?  She could be carrying. . .  Packratia!  Your best friend around the corner, who seems like an upstanding guy and says he's got a bag full of extra styrofoam peanuts for packing those fragile items you hope to ship to a family member in another state?  He too could give you. . .  Packratia.  Even your spouse, girlfriend, boyfriend, or significant other could have. . .  Packratia.  Don't let your guard down for a minute.

No one is immune to Packratia although wargamers are more prone to it than most.  Packratia is insidious and can infect your marriage or committed relationship before you realize what has happened.  Before you know what hit you, Packratia can turn your cozy home into a veritable hell-on-earth within a few short weeks.  Recognize the symptoms of. . .  Packratia.  Disorganized stacks of old hobby magazines, small odd bags crammed full of balsawood offcuts, piles of old plastic bottle caps to use as temporary painting bases, and that certain familiar burning sensation whenever you use the last sheet of a writing pad and try to envision to what particular use you might put that remaining heavy cardboard backing.  Oh, yes!  You too might just have a bad case of. . .  Packratia.

Packratia is dangerous, and Packratia is highly contagious.  Packratia leads to sorrow, heartache, and, in its worst forms,  madness.  Don't risk transmitting it to your loved ones.  Visit your doctor and get checked for the Packratia virus today!   Most cases can be cured in just a few minutes with a simple vaccination in the privacy of your doctor's office or outpatient clinic.  Now, don't you owe it to your family to get screened for. . .   Packratia?  Do it as soon as possible!  This concludes today's public service announcement brought to you by People Against Packratia, the Presidential Commission to Fight the Spread of Packratia, and the American Red Cross.

Now, what about those vignettes?  Here they are.  Still not perfect, but it's getting better all the time (didn't some band or other from the 60s sing that?).  For the more techincally minded among you, here are the details:

* The distance between Sony Cyber-shot TX20 camera and subjects was between 5"-7" (approximately 12.75-17.75 cm).
* The camera flipped itself automatically into the macro setting.
* A small tripod was used.
* Self-timer set for 10 seconds.
* No flash.  Indirect, diffused lighting came from three different lamps each with 100watt "daylight" corkscrew bulb.  One aimed at the top of the lightbox, and two aimed at either side of the light box.  I moved the two side lamps around to cast the most indirect light possible onto the figures.
* Five slightly different pictures were taken of each vignette.  The three shared here were the best as far as focus, crispness, and lighting go.
* The best three of the original photographs were next sharpened and then cropped using Photoshop Elements 9.  Additional automatic adjustments blitzed the fleshtones of the figures for some reason and made everything else too bright, so no additional manipulation of these images occurred. 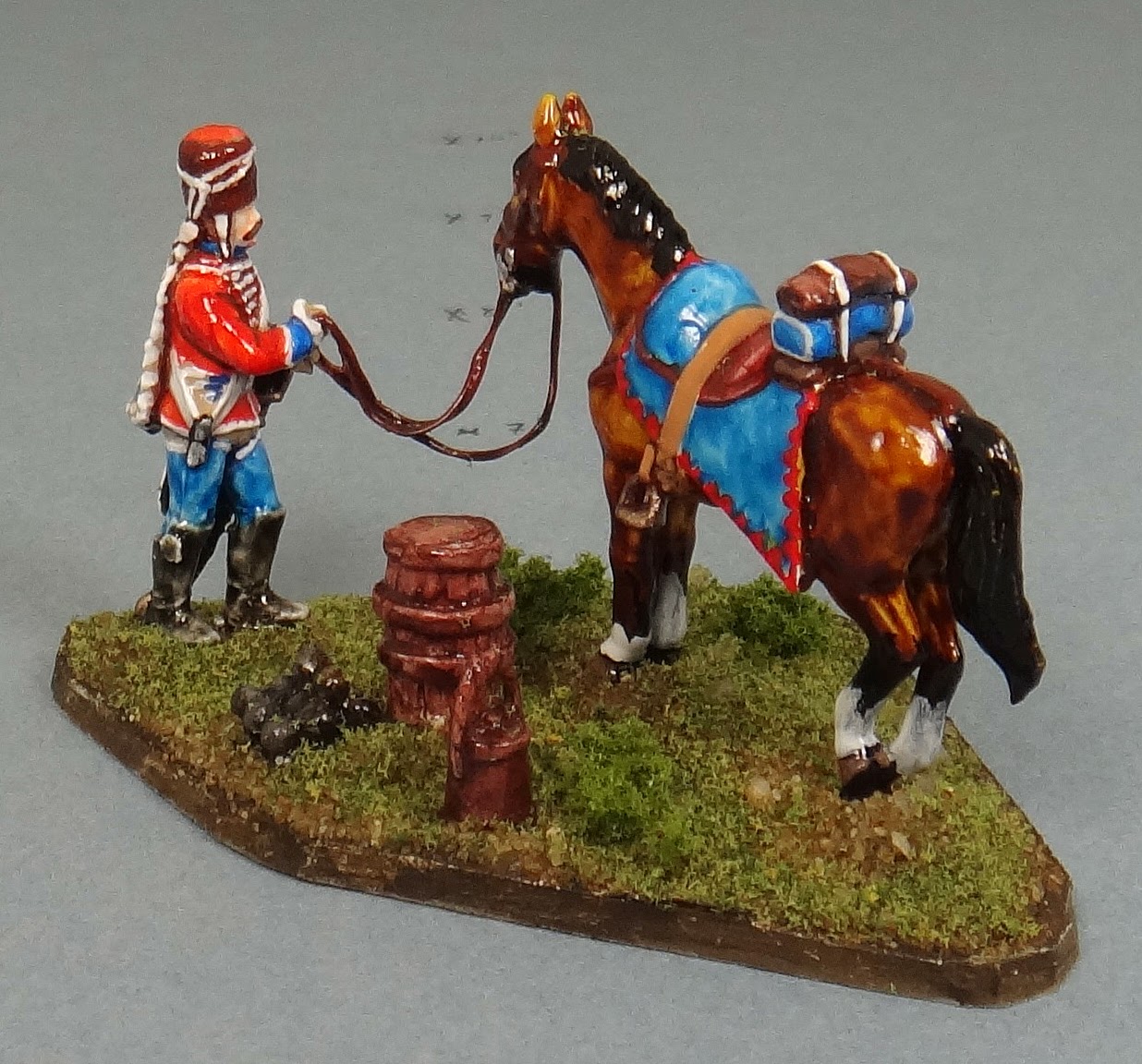 A Minden hussar trooper and his horse.  The wire reins were devilishly hard to thread through the tiny holes I drilled in the horse's muzzle and the trooper's hands.  Finally managed it though after hours of trying.  Some days. . . I did not detail the bucket and barrel since they are not the sole focus of this particular scene, but I just might do so quickly this coming weekend to give everything the finish it deserves. 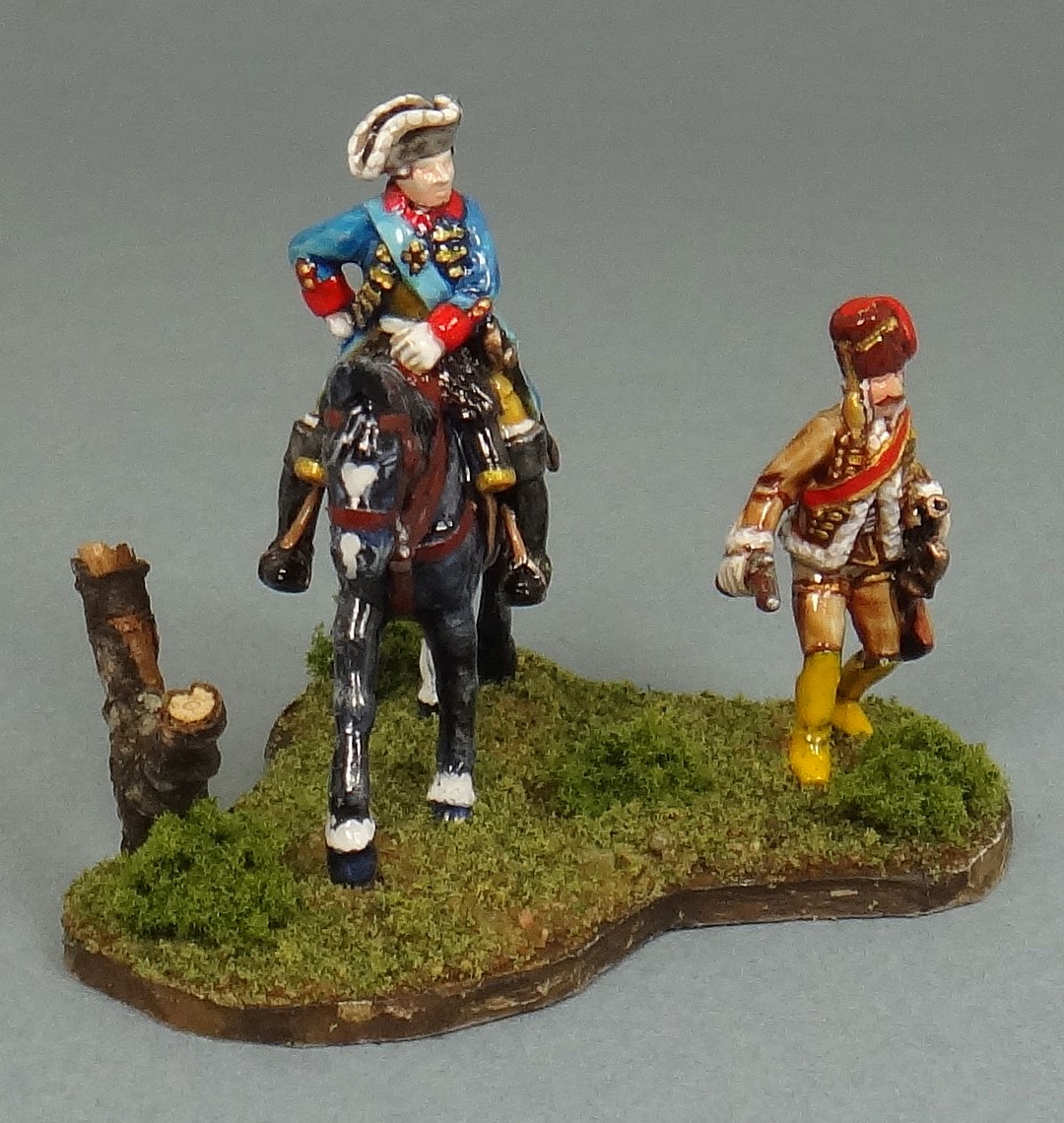 The Freiherr Paul von Hasenpfeffer (at left) observes something in the distance that has been brought to his attention by a nearby Prussian/Stollenian hussar officer.  Von Hasenpfeffer is a Fife & Drum Hessian general that was one of the figures given to me by my young son, the Young Master Paul, just this past Christmas.  The hussar officer on foot is, of course, a Minden figure that I painted up as, more or less, an officer of the Prussian 6th Hussars.  Typically, we provide our tiny regiments of hussars with the brightest, most gaudy uniforms possible, but I've always liked the illustration (Plate H, p. 32) by Bryan Fosten in Frederick the Great's Army: 1 Cavalry, hence my attempt at a brown uniform for the first time.  Not too shabby if I might be so bold as to say so myself.  I am also pleased with the way the breeches and waistcoat of von Hasenfeffer and the boots of the hussar officer turned out.  Not too bright but definitely yellow.

Springinsfeld said…
Excellent painting again. I really like the porcelain like finish on your recent work.
2:06 AM

joppy said…
I know what you mean about Packratia. I still have some balsa planks and kits with pre-decimal prices on!
2:38 AM

Mosstrooper said…
Oh dear ! I've been suffering from Packratia for years and not realised it !- Like the figures
3:02 AM

Mad Padre said…
Those figures are quite lovely. The 4 pounders look impressively fierce and the figures, especially the red hussar, are bright and vivid.
I too suffer from Packratia and am so relieved that I can finally admit it. I recently went to Michaels for their after Christmas sale and came home with three bags of white winter foamy things which I might, repeat might, use for a winter battle some day, if I ever paint up the figures. Sigh.
10:03 AM

warpaintjj said…
I am finally free of Packratia - it has taken nearly 30 years and will possibly always haunt me, as you suggest - be ever vigilant gentlemen.
As for the figures that deep deep colour and very high gloss are very lovely.
Be good, Jeremy
5:13 PM

You might wish to look further at the Minden/ Fife & Drum arsenal prepared by the Stalwart James of Purky. Ah for a small fortune to invest, but the new Pontiff does remind us to frugality....

A wonderful New Year to you, the Duchess and the Young Lord,