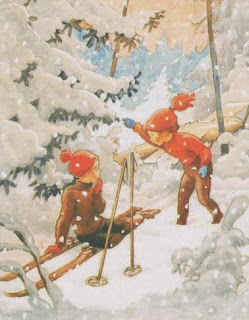 A suitably quiet picture this morning for Der Zweite Weinachtstag, the Second Day of Christmas.

I hope you had a quiet, peaceful, and enjoyable yesterday, whether you observe the Christmas Festival or not.  The Grand Duchess, Young Master, and I had a delightful, fun-filled day of gifts, treats, good food, and telephone calls.  Quiet and free of difficulty.  It was, the Grand Duchess and I agreed later that evening, one of the nicest, easiest Christmas Days we've enjoyed in several years.  Best of all, it truly was a toy soldier Christmas all the way around since both the Young Master and I presented each other with gifts of the toy soldierly persuasion.  As soon as I have had some more coffee, some breakfast, and a real chance to wake up, I'll be back to amend this particular blog entry with a few photos and a few more details of these toy solider gifts.  Stay tuned! 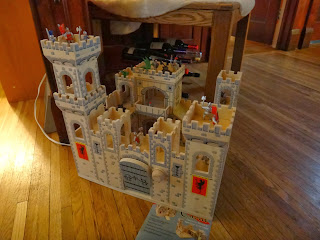 The centerpiece of this year's Christmas must surely be this castle and the various red and blue knights, catapults, and dragons left for the Young Master by Ol' Saint Nick sometime in the night between Christmas Eve and Christmas Day.  I think some noise on the roof and down in the Living Room roused me about 3am, but I cannot be sure, and, slug that I was, I turned over and went back to sleep in fairly short order.

As I mentioned earlier, this particular Christmas was special because the Young Master and I each presented the other with toy soldier gifts.  Here is a shot of the Melissa&Doug Medieval Castle and knights that Santa Claus left for YMP before he was downstairs and breakfasted yesterday.  Initially, I had hoped to make something myself, but time and limited carpentry/modelling skills on my part soon forced me to reconsider that route.  Durability was another consideration given the age of the Young Master (4+), but luckily I thought of the various delightful wooden toys manufactured by Melissa&Doug, which YMP has a few of already, and had a look at their website.  Low and behold, they produce this castle, and there you go! I even managed to find this particular castle substantially discounted elsewhere, so it was a win-win situation all the way around. 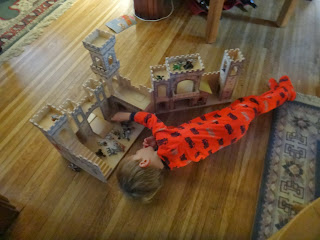 And here's the Young Master at play with said castle and knights later on during Christmas Day.  The three of us remained in our pajamas and robes until mid-afternoon, and it was fantastic!


As for the Young Master's soldier gift to yours truly, well, what can I say?  He is clearly attuned to his Old Man's way of thinking and presented me with a small parcel that contained half a battalion of Fife&Drum Rebel militia along with the new General von Knyphausen, Banastre Tarleton, and Francis Marion figures plus horses as well as the recently released Minden Miniatures set of four mid-18th century ladies (2) and gentlemen (2) on foot!  He sat in my lap as I opened the package on the living room floor beneath the Christmas tree yesterday morning, and got an extra special big hug and kiss from Dad when I realized what was inside.  I don't mind admitting that I teared up a little and had to collect myself before examining the contents of the Young Master's gift more closely. 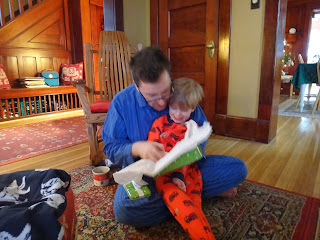 The Young Master and yours truly on Christmas Morning 2013, opening the small package of toy soldiers described above.  Truly one of the most wonderful gifts I've ever received.


Not to be outdone, the Grand Duchess also presented me with her own small parcel that contained, you guessed it, more Fife&Drum goodies!  These included a couple of the recently released powder wagons along with two pontoon wagons and the limbers to which the teams of horses are hitched.  Perfect to start that pontoon and wagon train I've blathered on about here occasionally during the last few years but have never gotten around to doing.

By the way, the Grand Duchess remarked on how friendly and helpful Jim "Der Alte Fritz" Purky was when she and the Young Master contacted him with their order some weeks ago.  In a world where not all proprietors, hobby or otherwise, are necessarily pleasant and eager to assist potential customers and clients anymore, it is refreshing when you come across a business owner who is.  If your gaming and collecting interests come anywhere near the mid-18th century, please do have a look at Jim's Fife&Drum and Minden lines of figures and throw some business his way forthwith.  We in the Grand Duchy of Stollen want to see his venture succeed even more so than it has already.

Generous hobby subsidies from the Grand Ducal in-laws this past birthday and for Christmas this year have swelled the Stollenian War Chest considerably and will go toward adding horse teams, riders, and drovers to these wagons after the first of the year as well as providing several additional wagons and teams later plus some Minden figures of one kind or another to represent the pontooniers.  It looks as though 2014 is shaping up to be a year of additional staff and non-combatant vignettes as well as THE year that the pontoon and wagon train(s) get started in earnest.  The Young Master, the Grand Duchess, and her parents truly outdid themselves this Christmas.

Returning, though, for a moment to the quiet joy that was Christmas Day 2013. . .  Why in the heck can't we have more days like that during the rest of the year?  And I don't mean the gifts and things.  Rather, I mean those quiet, relaxed, calm, uncomplicated times filled with the small joys of immediate family and pleasant company capped off by a special meal.  We all need more of that I think.  Let's make 2014 that year when we say "No more!" to the overly connected, overly scheduled, busy 24/7 way of life that has overtaken our post-postmodern existence.  I hardly suggest we turn our backs on modern conveniences like internal plumbing and central heating. . .  or technological gadgets that we think we "need."  But the constant go, go, go and (largely needless, self-imposed) obligation to be overly wired and tethered to our phones and pads -- always available or checking for new texts, voice mails, and e-mails -- cannot be good for us or those around us in the long term.

tradgardmastare said…
Sounds like a splendid day.I look forward to hearing about the gifts...
11:23 AM

Nigel J said…
Stokes you are right. Christmas Eve is one of the few days that the five of us get to be together without interruption.
Make the most of them. Before you know it boyfriends/girlfriends and adulthood will provide an attractive alternative to spending time with Mum and Dad
3:31 PM

marinergrim said…
Stokes I'm happy that you had such a good day.
I agree about the immediacy of everything today. Family first.
1:47 AM

Steve-the-Wargamer said…
Stokes... "the constant go, go, go and (largely needless, self-imposed) obligation to be overly wired and tethered to our phones and pads -- always available or checking for new texts, voice mails, and e-mails -- cannot be good for us or those around us in the long term".. wise words.. couldn't agree more!!
2:47 AM

G. Thomas Fitzpatrick said…
Those Melissa & Doug castles are very nice for young children. Got the same one Christmas 2012 for my then 3 y o granddaughter, along with an array of Schleich and Papo knights, dragons, princesses, catapults, and treasure chests. She is still playing with it, though the horses tend to be her main focus. Maybe, if she continues an interest in medieval things, in a few years she will get the Barzso Nottingham castle and Locksley Manor set.
10:54 AM

Old School ACW said…
Tongue in cheek I ask, "Ah, but is the castle compatible with 30mm toy soldiers?"