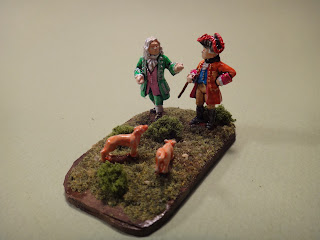 Professor Detrius (in green and pink), the Grand Duke Irwin-Amadeus II, and his dogs Max and Moritz out for a country stroll and some philosophical debate. 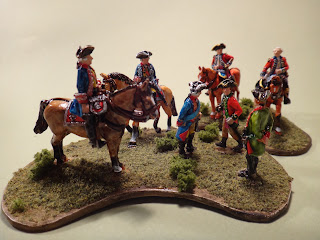 A couple of staff groups, Minden figures in the foreground (along with one Fife&Drum officer) and two Fife&Drum figures in the rear.  Sadly, the large base with the five figures has warped somewhat due to the coats of clear matt varnish that holds down the scatter material.  Lesson learned?  Keep scenic vignette bases fairly compact. 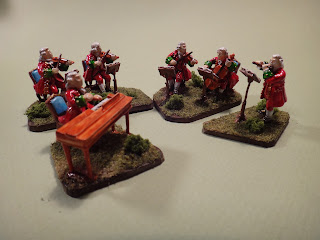 And finally, here they are, the Grand Duke's court combo, led by the Maestro Bacharach on the clavichord in the foreground.  Listen carefully, and you'll hear them playing a newly written tune by the Maestro called Walk on By.


Replies to Comments, Questions, and Further Meaningless Holding Forth

Thank you for the nice comments, men!

-- I fixed the warped base in the middle photograph by slapping some paint on the underside, which seemed to correct the problem overnight.

-- The musicians are indeed meant to be playing outside (part of a much large scene that is underway right now) for a small party thrown by Aunts Hiltrud, Waltraud, and Irmgard.

-- The bases are bass wood that is several millimeters thick.  I like it because it's very easy to work with and inexpensive.  I might try, though, ordering some of those custom particle board bases at some point from one of the several providers IF they can provide irregular shapes.

-- The large areas on the figures , instruments, and horses shown in the photos above were painted with Winsor&Newton alkyd oils thinned considerably with Liquin Original.  Small details were then picked out with the usual Citadel acrylics, though most of the silver and gold lace and buttons were done with Winsor&Newton, Grumbacher, and Rembrandt oils.  Oil-based metallics typically dry much, much faster than non-metallics, and you just cannot beat them for brilliance.

-- I've found in the last couple of years or so that a more impressionistic approach, rather than trying to paint in every last detail, yields a pleasing appearance that I can live with, and (most important) the figures get finished pretty quickly once I actually get my 'seat' in the painting seat.

-- And let's be honest here.  Only real detail freaks like us are going to notice, when looking over the figures on display, that the Grand Duke's nostrils have been left to the imagination.  Non-wargamers -- wives, partners, significant others, boyfriends, girlfriends, and the rest of society -- certainly won't.

Fitz-Badger said…
Very nice work! The colors are nice and vibrant, and the gloss varnish makes them look like porcelain.

With the warped base sometimes you can't get it to warp back the other way by painting or varnishing the underside. I think it warps because the varnish causes it to expand a little on the varnish.
5:41 PM

Der Alte Fritz said…
Would it be possible to base the musicians on some plank flooring like those at the Kingdom of Wittenberg ? I guess they could be playing outdoors.

What material do you use for the bases and how thick
7:54 PM

Gowan James Ditchburn said…
nice work! they look very nice. a bit of a shame about the wrapped base but oh well lesson learnt.
8:05 PM

Conrad Kinch said…
A wonderful display Stokes. I envy you your musicians.

Ross Mac rmacfa@gmail.com said…
Marvelous! I love the look. (and good job on the hounds).

Walk on By? I could have sworn they were playing Roll over Beethoven. I bet they have quite the repertoire already.
7:27 AM