Much Needed Time at the Painting Table. . . 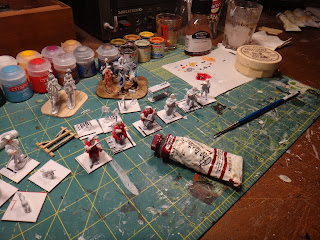 A few of the Eureka musicians in progress along with some Minden figures at the rear of the table.  Irwin-Amadeus II (right rear) later got a crimson coat too.  I aim to make his waistcoat and pantaloons (or should I say 'plus four'?) equally colorful.  He is a vain dandy after all.  Or is that me?

Ah. . .   Some much needed time to myself at the painting table today and last Wednesday evening, applying fleshtone and, this afternoon, some Alizarin Crimson to the Grand Duke's musicians.  The paint is already pretty buttery straight from the tube, but with a good-sized blob of Liquin Original, it flows from the bristles onto the figures wonderfully, settling in folds and thinning just a bit on the raised areas.  Presto!  Instant highlights and shadows without a two or three-step process.  Painting today has been an absolute delight.

The tube pf Alizarin Crimson picture must be 40 years old if it's a day and once belonged to Dear 'Ol Mom who trained at university as a painter and sculptor, gaining entry into a competitive program in the very early 1960s, painting her canvases in a paint-stained pair of guy's Levi's, to the strains of early Bob Dylan, the Kingston Trio,  Peter, Paul, and Mary as well as Joan Baez.  Hard to believe Mom turned 68 this last birthday!  As we do with loved ones, I guess, I always imagine her the way she looked at about 30-32.  Funny the way the memory works.

Anyway, this tube of paint was in Mom's box of paints when I was about four or five years old and she had her easel set up in our dining room because that room received the most natural light late in the mornings and early afternoons.  I used to sit on the floor nearby on summer mornings -- no school of course -- and talk to her as she worked on her paintings at the time once everyone had had their breakfast, and Dad had grabbed his coat and briefcase on the way to work.

The tube of paint came into my possession in the early 1980s when I began painting D&D figures, and Mom suggested that I might try using some of her oils to paint them.  Kind of neat that I still have most of those tubes now, and they are still workable.  Sometimes, however, it does take a bit of doing to unscrew the caps!  While I've added a bunch of my own tubes of oil color to my kit over the last dozen years or so, it's fun do some of my own painting, albeit a very different kind, with some of the same tubes of color that Mom used decades ago during my childhood.

By the way, for those of you who might wonder about drying times, I have found that the Liquin speeds up drying time remarkably.  In many cases, the oil paint is dry to the touch in 24-48 hours when it has been thinned using Liquin.  And, of course, when you use Alkyd oils, the drying time is reliably 18-24 hours, and even faster when Liquin is added.  While I do much of my smaller detailing with acrylics, there's just no beating oils for brilliance and depth.

In other news, a package arrived yesterday from Old Glory U.K., containing a bunch of 18th century aristocrats, children, servants, and a trio of violin players.  Not bad castings at all with only a little flash to trio away between arms, torsos, and legs.  Based on Willie figures, so faces that are full of character, and they should fit in well size-wise with the figures already in the Grand Duchy of Stollen collection and pile of lead.  What I'm doing with them is assembling a variety of smaller vignettes that can be combined to create a large picnic tableaux of societal types who have come out from town to enjoy music, wine, and foie gras in the countryside along with a distant battle from the comparative safety of a hilltop.  I read once about Sebastopol society actually doing this before the Battle of the Alma in September 1854 at the start of the Crimean War!  Stay tuned to watch this take shape over the next several weeks.

Conrad Kinch said…
Nice story Stokes - though I'm not sure I could deal with a 12+ hour drying time.
5:42 PM

Fitz-Badger said…
I've read about civilian spectator "picnics" like that during the American Civil War, too. And old maps that show battle scenes around the edges sometimes include vignettes like that as well.
11:18 PM

Bluebear Jeff said…
So Irwin-Amadeus' coat will be the color of a boiled lobster, eh?

Unknown said…
Very interesting. I have read on several blogs that oils are very good, especially for horses. Could you write a few lines on the technical and equipment issues of their use.

Also, battles were great social occasions. ACW is not my field, but I seem to recollect that the great and wealthy trotted out from Washington to watch the First Battle of Bull Run, only to create a massive traffic jam when the Union Forces lost and the spectators were forced to rush home. Earlier, people travelled for days to see the Spanish and French forces trying unsuccessfully to break into Gibraltar in the 1790's. Perhaps the good burghers of Stollen would be tempted to make such a trip.

Heinz-Ulrich von Boffke said…
Thanks for the comments, men.

Conrad -- These days, given my paucity of painting time in recent months, things are usually dry by the next painting session several days later.

Fitz -- Ah yes! Now that you mention it, I recall reading something similar about the First Battle of Bull Run too. Hard to imagine people doing this now, but then we do have amateur weather enthusiasts who chase down tornadoes!

Jeff -- Good pint! I had not considered that.

Martin -- I'll give that some thought and try to write a few words about the practical side of oils in a future post. . . Or maybe a magazine article? Ooo! The megalomania is taking hold again. Time for some more coffee!


Thanks again for your thoughts and observations everyone! Very much appreciated.