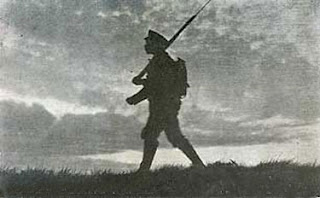 On the eleventh hour, of the eleventh day, of the eleventh month of 1918, the guns fell silent on the Western Front.  Let's pause for a moment today to recall that actual war is a frightful thing in which people die, and even among survivors, lives and psyches irrevocably altered.

This morning, my thoughts turn to my maternal grandfather and his two older brothers, my great uncles, all of whom served in the Armed Forces of the United States during the Second World War.  All three came home, but all three had seen and endured some extremely unpleasant things.

Very little of this was ever talked about by the time I was old enough to ask questions and remember things, but my grandfather Dave was close by when a friend and fellow paratrooper was killed in France.  Uncle Baxter's ship was torpedoed and sunk in the South Pacific.  I seem to remember him saying something once about the sharks circling the survivors who clung to wreckage and improvised rafts.  There are many  such tales from that time.  And Uncle Jack, the oldest of the three, while he never ever talked about his wartime experiences, slept forever after with a loaded, holstered pistol on the nightstand next to his side of the bed that he shared with Aunt Mollie.

Although the three brothers managed to return home to North Carolina in 1945 and '46, and went on to lead productive lives -- as a corporate executive based in New York City a furniture salesman in North Carolina, and a high school principal in Phoenix, Arizona respectively -- each had also, clearly, been forever marked by his experiences.  A sobering thought that we might do well to consider as we pause to remember our surviving and deceased veterans today.