A long, lazy, and relaxed Thanksgiving Weekend here in the Grand Duchy of Stollen.  However, I did get busy for an hour or so late yesterday afternoon and moved the wargaming table from the central room of the basement into the SW corner room at the front of the house, just beneath our library on the ground floor.  This room can be closed off to those devilish felines Gunnlaug and her brother Onyx without difficulty, and I might just install a proper door and threshold in the new year. 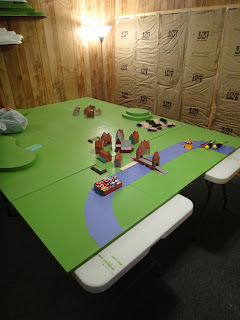 Here's a second shot of the paneled and carpeted room.

A pleasant surprise was the fact that it will not be as much of a tight squeeze maneuvering around a 6'x8' table in this room as I had anticipated.  It's a bit hard to tell from the photographs, but there are at least two feet of clearance on either side of the table, and three or more feet of clearance at the near end of the table in the foreground above.  Perfect! 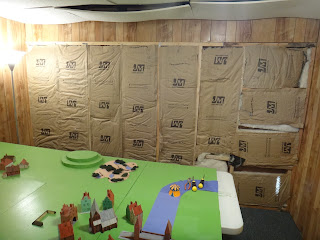 The poorly installed wall, now slated for removal in early December,  which currently separates the War Room from yours truly's office and painting space in Zum Stollenkeller.

Now, you'll note in these photos the extremely poor installation of ceiling tiles and, indeed, a partition wall by the previous occupants of our home.  I've had an idea knocking around in my head for a few years now and decided to explore it further yesterday after moving the table to its new location and re-erecting it.  The surface paneling came away without effort.  The 2"x4" studs are held in place by a few Phillips head screws rather than being properly nailed into place.  The insulation is not fastened down, and the paneling on the far side of the wall, in my office, is not nailed or stapled to the studs either.  So, guess what? 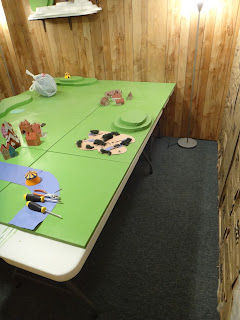 I don't know why in the world I did not think to set up the table in this room three of four years ago.  I'll have ready access to three sides of the table just like I did in the large central room, BUT the Grand Duchess will not need to walk around it, and it will be safer (cross your fingers) from the cats.


Yep, with some old clothes, work gloves, safety goggles, and a mask, it should take me only a few hours to remove the wall between the two rooms and bag up the insulation, opening up the space up between the two rooms, and enabling me walk directly from the painting table to the wargaming table as new personalities, troops, and scenery are completed to add to the collection.  I'm not normally one for getting into home renovations myself, but this job seems almost idiot proof.  Alright, alright. . .  I can hear your collective chuckling now.  Shades of Basil Fawlty, the builders, and all that.  I can assure you, though, that the Grand Duchess is not as irritiating as Sibyll Fawlty.  ;-)  In any case, I'll keep you updated on my progress however it goes. 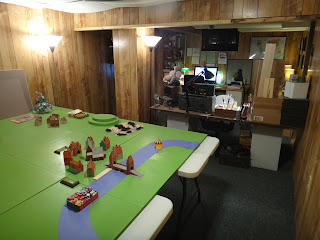 The trash has been cleared away, and the vacuum cleaner made a return visit.  Removal went very fast because the wall installation was just downright bad.  I watched my grandfather and mother do enough of this sort of work when I was a child to know how studs and wallboard/paneling SHOULD be installed. . .  And this wasn't it.  Amazingly bad.  Anyway, much more space now and a window just over our left shoulders in this photograph means more light.  But, now, I'll need to get the painting and radio table out from the middle of the floor.  Stay tuned!

Bluebear Jeff said…
Looks nice, Stokes . . . and I liked the first photo where the styrofoam on the shelf looks like a cloud.

Fitz-Badger said…
I like the barge on the river transporting a load of dice (to the Stollen armed forces?). :)
I assume this can still be closed off from the machinations of the Grand Ducal Felines?
5:32 PM

Neil said…
Really enjoy your blog. I have nominated you for the Liebster Award: http://toysoldiersanddiningroombattles.blogspot.com/2012/11/its-major-award-note-holiday-movie.html Neil
6:33 PM

Stryker said…
That all looks great! I have a bit of DIY I need doing if you want to pop around?
5:16 AM

johnpreece said…
Ah, memories of youth. Thinking 2' plenty of room to walk around a wargames table.

Dear boy, go easy on the Stollen or you will find yourself like me and Ludwig of Bavaria needing to cut a semicircle in the table in order to reach the figures.

It looks to me like you nw have avery enviable wargaming room.

My table is too close to the washer and dryer and is often used as a laundry folding table.... :(

Nice pics as always. I always enjoy your ramblings so...tag you're it

marinergrim said…
Very envious of all the space you have and the wase with which you added to it! Really nice set up there Stokes.
7:38 AM