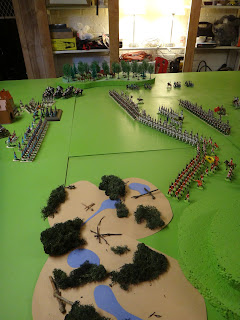 "Von Tschatschke?  Wake up!  There's a considerable lot happening on the battlefield, old fruit bowl.  Take a look at the central part of the table.  Much maneuvering has happened while you've been sleeping it off," chortled General de Latte as he helped himself to another round of his host's best brandy. 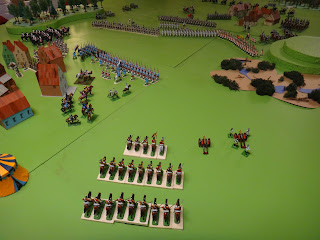 From his side of the table, von Tschatschke rubbed his temple and tried to focus his bleary eyes.  How long had he been out? "Is it true, de Latte?" he asked through the fog,  "It looks like my lone gun and crew are within 31 inches of your Flickenhoffer Fusiliers." 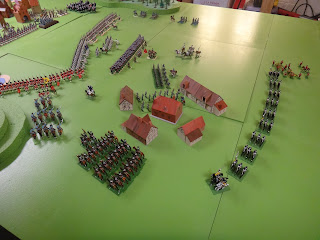 "Indeed, old passion fruit," said de Latte with a polite chuckle as he checked his watch and replaced it in his waistcoat pocket, "however it looks like my cavalry is almost within place around Eispicke Village." 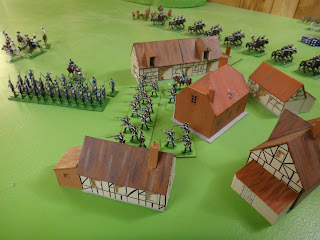 General von Tschatschke, his wits once more about him, retorted, "Yes, but my newly based Jaeger zu Fuss in Eispicke Village are within just a few inches of the flank of your engineer battalion.  It doesn't look good for them, old mango!  Now where  is my tobacco?"  He looked around the room.  "I know I saw it here somewhere." 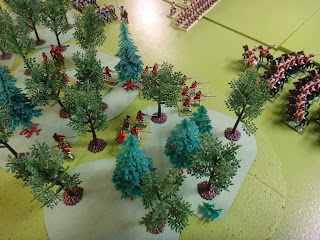 "Ha, ha!  The front ranks of my own Irish Grenzers are within four to seven inches of your cuirassier regiment," answered de Latte with considerable excitement adding, "and roughly a third of the Ermland Garde are within seven to twelve inches of their front as well, old papaya.  Get out of that, old plum!"  Von Tschatschke frowned, adjusted his monocle, and peered at the tabletop. 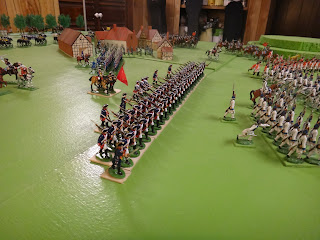 "And just look at that, von Tschatschke!" exclaimed de Latte.  "Another one of my regiments has been affixed to multiple bases.  That should help speed things along.  Don't you agree?  And try you inner coat pocket, old apricot.  You'll find your tobacco pouch there I think."

Bluebear Jeff said…
I think that things are about to really heat up on the table top, eh what?

marinergrim said…
Always apleasure to see such a great game

Unknown said…
Wonderful display of proper wargaming ol'boy. Please consider joining The Odd Fellows we are in our infancy but a chap can spot one with the right stuff.

CelticCurmudgeon said…
My Dear Ulrich,
Very nicely done on the table top. Your rendering exceeds that of the ancient tome both in terms of the actual action involving the miniatures as well as the commentary. Truly a commendable effort.
Gerardus Magnus
(It's not necessary to address me as "Magnus"....)
10:02 AM