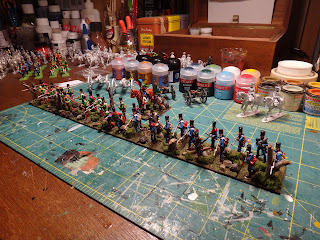 A shot of the entire battalion of pandours with the notorious Count von Eyczing de Csiklos and his small staff at the rear of the unit.


The final painting and groundwork are now finished on my combined unit of pandours.  I won't make terrain on my bases a regular part of the routine here at Stollen Central (except for several planned mounted command vignettes), but there's no arguing that the treatment really adds something to the overall presentation of tabletop units.  To my eyes, this particular unit calls to mind various miniature predecessors painted by the likes of Doug Mason, Phil Olley, and Jim Purky, so I've managed to achieve what I envisoned before starting, which is not always the case.  My painting is improving I guess.

Speaking of which, all brushwork was done with a combination of oil and acrylic washes over a white basecoat as I mentioned here the other day.  The multiple bases, to which the figures were affixed, were cut from very thin plywood sold in my local hobby shop for model airplane use.  I next attached a variety of small rocks and twigs to pose as boulders, treestumps, and fallen limbs using common super glue.  Sand was then tacked down with a liberal coating of Liquitex artists' acrylic matte medium and given a wash of dark brown acrylic paint once everything was dry.  Said sand was gleaned many years ago from the creek bed at my maternal grandparents' place in southeastern Pennsylvania and stored these last 28 years in the brown Lapsang Souchong tea tin, visible in the background of the accompanying photos.

Once the sand and brown wash were thoroughly dry, and nostalgia for my relatively carefree youth on my grandparents' place aside, grass scatter material by Woodland Scenics was added using the matte medium once again -- Highly useful stuff for terrain purposes by the way.  I learned about this reading a book on model railway and diorama scenery back in the 90s. -- and then some larger undergrowth material (Woodland Scenics again) was stuck on top of that with a few dots of super glue.  The way I arranged the figures and terrain on these multiple bases is meant to suggest relatively undisciplined, irregular troops in ragged, open order as they move and fight over broken ground at the edge of a wood or copse.  Seems to have worked pretty well by the time everything was finished, so now it's time to put up my painting feet for a little while and take a breather.

While I'll work on some uniforms without the complicated frogging and braid for a while, I'll return to Croats before too long since I have enough extra Minden and RSM figures in the small pile of lead here to add a third company to the Eyczing-Csiklos Panduren eventually.  The three companies will never operate as a single, large super unit of light infantry though.  As Charles S. Grant cautioned in one of his recent books, it's probably best to have just a single company, or maybe two at most, of this kind of irregular light infantry as part of one's tabletop army to avoid having them dominate one's 18th century games.  Kind of like having too much artillery on the table as H.G. Wells hinted in Little Wars.

In any case, it will be neat to have a small corps of brightly colored pandours in my collection.  But in the meantime, there are a pair of those nifty new Fife and Drum Valliere 4 pdr. cannon plus Minden figures of Alte Fritz himself and an aide on horseback to think about.  No doubt, the more eagle-eyed among you will have spied these two lurking in a few of today's photographs. 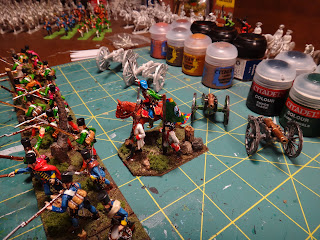 A close-up of Count von Eyczing de Csiklos and his staff. 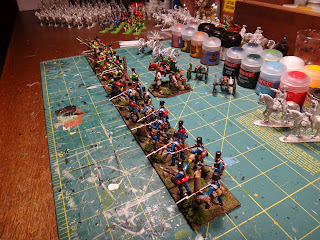 Another shot of the entire unit.  I'm very pleased with the way the painting turned out this time.  Not overly fussy, detailed, or even perfect, but the overall effect is what I hoped for. 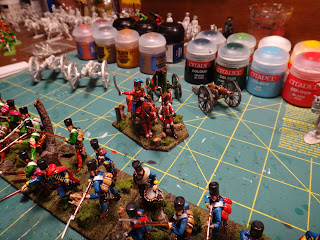 Count von Eyczing de Csiklos and his staff from a slightly different angle.  He may be a dastardly sort, but the Count is a terrible ham whenever he notices a camera on him. 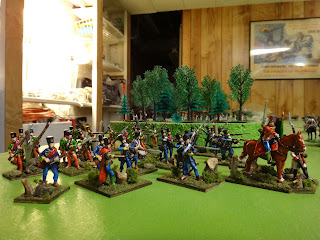 Against the neutral green of the gaming table, these figures really come to life.  Here they are, descending from the wooded ridge and advancing rapidly on some unseen foe.

What about the basing?  Well, as you'll observe in the following pictures, each of the two 15-figure companies consists of several bases: 3x3, 2x2, and 2x1 plus the three figure battalion staff.  The different bases can be kept close together to approximate an open order firing line, moved apart to approximate a firing line in extended order, or arranged like they are above, suggesting a veritable swarm of irregular infantry.  This type of basing also makes it easier to place the figures from the unit inside my buildings and/or within my 'cake decoration' woods.  It also makes moving the unit much faster, which has been the driving force behind my push to get all of my previously unbased figures onto multiple bases with a few singles and doubles left over within each unit, to facilitate the easy removal of casualties. Oddly, I found myself thinking about casualty caps the other day. 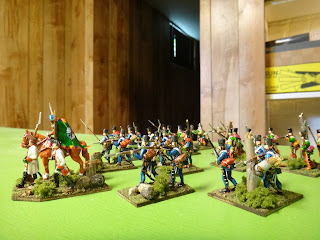 Here are the panduren advancing into the morning sun.  The terrained bases show up really well here. 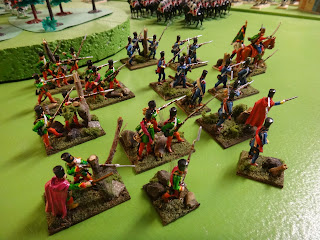 Finally, here is the combined pandour battalion in an Orson Welles-like aerial shot, inspired by the opening scene of his film A Touch of Evil.  As Foghorn Leghorn might say, "That's a little cinematic humor, son!"  Kidding aside, these final three photos are notable not only for their better lighting and staging, but they also provide a much better idea of my "mini-vignette" basing scheme.

Fitz-Badger said…
Excellent troops! I especially like the ones in the blue uniforms (just personal taste), but all are well done.
1:13 PM

Ken said…
Lovely-looking battalion. I need to get this dissertation sorted and find a tenure-track position so that I can get back to the family 1/72 armies with a clear conscience.
1:25 PM

Bloggerator said…
Get them off my battlefiled!