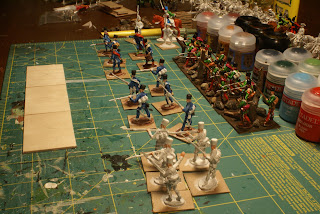 Will I make the July 24th Painting Challenge Deadline?  Only time will tell, but I'll give it the old college try over the remaining 13 days.

In between moving figures around on the ol' wargaming table and other things associated with the Battle for Neu Sittangbad, I've been hard at work on those 33 Minden and RSM95 Croats that I pledged to complete during the May24th-July24th period as part of the current painting challenge of which I'm a part.  It has been a very handy way to avoid starting some Norwegian-English translation projects that have fallen into my lap the last few weeks.  Anyway, the five figures in the middle distance are the current batch (in dark blue tunics and leggings) I'm concentrating on, but you'll also observe the other two batches in various stages of completion.

On the left-hand side of the photo are three 60mmx40mm bases.  Each of these three bases will be further cut into a 35mmx40mm base (on which three figures will be glued when painting is completed) and a 25mmx40mm base (on which two figures will be tacked down).  The basing issue is something that I've thought about since the late winter, and it is a compromise of sorts.  There were, naturally, a few considerations to keep in mind in arriving at a solution to the problem of basing irregular troops.

First, I wanted something that would fit in with the basing system/sizes I've adopted for my fictitious armies.  These are the sizes stipulated in Peter Gilder's In the Grand Manner rules.  For 25mm figures in close order, he suggests eight figures in two rows of four mounted on a 60mmx40mm base.  Some of you might recall that I made the decision to mount my armies on multiple bases last winter to speed up games.  That small task is about half-finished at this point.  Fine and dandy so far.

Where I depart from Gilder's rules, though, is in the basing of irregular/skirmishing troops since I've never cared for the look of figures mounted in permanent skirmish order.  I've always preferred to retain the possiblity of moving my light troops into closer order, should the situation warrant it, which makes it easier to march them down roads and through narrow town streets if necessary.  And that's hard to do when your light troops are mounted in permanent skirmish order.  So for my Croats, I next decided to mount five figures -- instead of Gilder's eight -- to a 60mmx40mm base in a looser, more ragged line to reflect the more cavalier nature of irregular light troops like these.

Finally, as I fooled around the other day with the first 15 completed Croats (in red and green at right in the photograph above), to find a configuration that looked about right before gluing them down, it struck me that I might further split each 60mmx40mm base of five figures into smaller vignettes of two and three miniatures respectively.  Such an arrangement makes it easy to move the various bases apart to represent a widely dispersed screen of skirmishers on a flank or the edge of a wood.  It's just as easy to line up the six bases end-to-end to represent a loose order firing line, or place them one behind the other to represent a unit at the march along a road or somewhere else.  Problem solved.

I'll eventually post some better photos here, which will make all of this clearer, once everything is done for the 33-figure battalion.  In the meantime, you can get some idea of what I'm talking about by clicking on the photo above and examining my work so far with the red and green half-battalion on the far right of the picture.  These have been affixed to their bases along with some terrain features -- tiny rocks to represent stones and boulders plus a few twigs to represent tree trunks and fallen logs.  As soon as I visit the local arts and crafts store, I'll pick up a small bottle of artist's matte medium and use it to affix two or three different sizes of Woodland Scenics scatter material to the bases, which will represent tall grass, weeds, privet shrubs, and briar bushes or something similar.

As I've no doubt discussed elsewhere on this blog, I generally do not terrain my figure bases, preferring to retain that Old School model soldier appearance as seen in books like Charge! and The War Game.  But I was so impressed by the wonderful work that Jim "Alte Fritz" Purky did with his Minden Croats (click on the preceding highlighted link) in May of 2011, that I felt like having a try at something like that myself.  I don't know that my own work will be quite as stunning as Jim's, but my combined Croat battalion should look reasonably good once they have all been painted and their bases finished.

As for the technical bits related to painting. . .  The flesh tone used has been done with my usual Windsor-Newton alkyd oil thinned liberally with Liquin Original.  All other painting has been with thin washes of Citadel/Games Workshop acrylics with the exception of the red leggings, which were painted with Winsor-Newton Cadmium Red, again thinned considerably with Liquin Original.  The mounted officer's horse, similarly, was also done with some shade or other of oil-based brown.

A word on brushes.  I finally broke down earlier this afternoon, and unearthed my carefully hoarded stock of new Winsor-Newton Cottman synthetic rounds -- a #1, #2, and a #4 -- purchased in January 2012.  Their sharp points have made painting a dream today, speeding things up considerably.  It's amazing how brushes in good condition enable you to put even runny washes and glazes exactly where you want them, and there they stay (happy, contented sigh).

The various Minden and RSM95 miniatures shown and discussed above were also purchased in January with a very generous Christmas gift card that came from my in-laws, who, now that I think about it, have subsidized quite a bit of the the Grand Duchy of Stollen collection during the last few years.  Thanks Nan and Dave!  I actually had adequate funds left over to purchase in addition the Austrian and Prussian staff sets from Minden Miniatures along with Continental and British mounted generals/ADCs from Fife & Drum Miniatures.  I hope to tackle two or three command vignettes after the current crop of Croats are done.

Speaking of which, the uniforms I am painting are based on a Knoetel illustration of the Hungarian Kokenyesdi Regiment (1742) in the case of the blue half-battalion in-progress above, and what I think is a Bryan Fosten illustration of von Trenk's Freikorps (1740s) for my red and green half-battalion.  The mounted Minden Austrian hussar officer's uniform is a more fanciful combination of the two, and I'll paint the marching Austrian grenadier officer and NCO as, well, Austrians in grayish white with red facings.

That's the plan at any rate, and now I'll end this post because it has grown much longer than I initially intended, and it's time to fix another iced-tea sized glass of iced black coffee.  Nattering on and on incessantly about one's hobby is hard work, you know.

marinergrim said…
Excellent work. Texturing bases works for me (at the simplest level it's only a scattering of sand and paint). I like the idea of the vigenettes within a unit too.
1:20 AM

marinergrim said…
Like that work a lot. Especially the idea of the vigenettes.
1:21 AM

tidders2 said…
nice work on the croats; be interested to see how your 'terrained' bases trun out