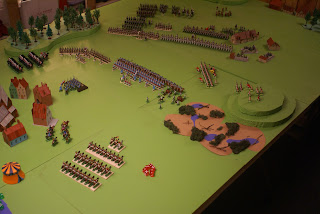 Here are a few more artist's renderings of the unfolding Battle for Neu Sittangbad at the start of Turn Four.  These should be of some help to our tireless cartographer, one Gregorius d'Cor, a friar of the Franciscan Order, who by some strange quirk of fate has found himself attached to General de Latte's retinue where his surveying and map-making talents are being put to good (??!!) use. 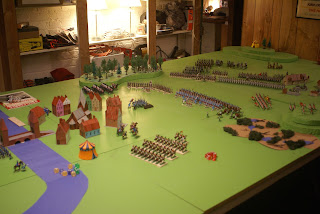 Next, we have less high-angled illustration that manages to show almost the entire battlefield around Neu Sittangbad, including the Stollenian engineers across the Blau Zwischen, the isolated Jaeger zu Fuss in Eispicke Village, and O'Malley's Irish Grenzers emerging from the woods along the ridge on the northern edge of the Sittangtal. . .  Frightfully close to von Tschatschke's left flank! 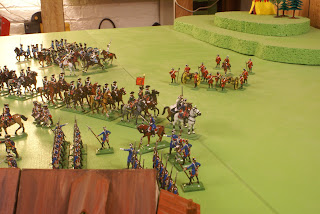 As impetuous on the Field of Mars as he is in the boudoir, General de Latte decides to lead his brigade of dragoons and horse grenadiers on a circuitous route through his own rear area and around Eispick Village to support his Mittau Volunteers and 11th Hussards on the southern edge of the battlefield.  He is accompanied here by his aide, one Captain Paolo di Biscotti, a young officer of noble birth, who has been seconded to the Army of Zichenau from his usual Neapolitan dragoon regiment. 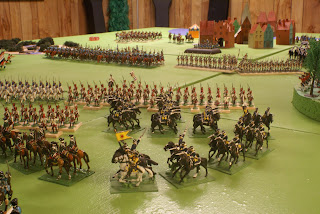 Left with little choice but to follow orders, the commander of Zichenau's Grenadiere zu Pferd, a Colonel von Schmetterling, orders his troopers to turn threes about and follow the Trumbach Dragoons to a new position along the southern edge of the Sittangtal.  "There is simply no way this development can have a favorable outcome," he mutters to his orderly as the cavalry column sets off.

Gallia said…
Oh Stand up. Everyone!
---
Bravos and applause must resound in memories and vicarious thoughts of Old Schoolers and New Old Schoolers lucky enough to observe the play. Stately, lovely, ordered and a well-done show.
---
Good form too showing a copy of the venerable Battlegames magazine replacing a copy of Tradition on the Champs de Mars. Efficient use of the room too placing one table end along a wall to maximize the size of the table with less intrusion into the room.
---
Naturally my eye is drawn to the mounted arm on both sides. To be there would be a true joie de vivre.
---
Respectfully,
Bill
10:21 PM

Der Alte Fritz said…
Oh just get on with the battle already
12:35 AM

Andrew said…
Just been looking back over the posts for this battle - it is an epic of Hollywood proportions. Don't listen to Alte Fritz, I for one just love watching it all.....

Heinz-Ulrich von Boffke said…
Thank you Andrew! I've now fixed that link. Thank you to everyone else for your kind remarks and continued interest. I've got to get the latest post written and, well, posted.