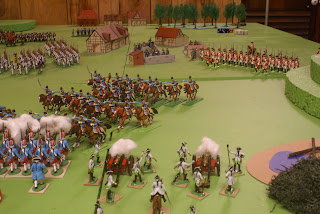 Above, General von Tschatschke's battery opens up on the enemy hussars and infantry.
"Looks like we have some artillery fire and musketry to resolve this turn, old pineapple!" cracked General von Tschatschke from the bottom of his brandy snifter.
"I suppose you're right, confound it," was the best General de Latte could muster through the haze of heavy blue cigar smoke that hung over the gaming table.  "But these are damn fine Cubans, what?  Now, explain to me again how all of this works.  I'm afraid," he added, motioning to his empty brandy snifter, "that I've had too much of this stuff!" 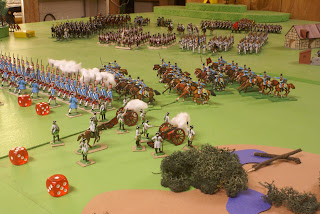 
"Certainly," replied von Tschatschke.  "My battery of two guns fired on your Mittau Volunteers and hussars.  The right-hand gun failed to find it's range at 20"-21", rolling a 1 when a 4+ was needed.  The left-hand gun was 5" from the hussars, so a hit was automatic.  Then, I rolled to determine the number of hits, and threw a 5, which at that close range is the number of actual casualties inflicted.  These must be halved since the target was cavalry and the hits can be assumed to be divided between horses and men.  Correct?"
"Righty oh, old bean" nodded de Latte boozily.  "Do, go on."  Von Tschatschke continued.
"That would give us 2.5 actual casualties," he finished.  "Should we round this up to 3?"
"Blast!  Three casualties it is then," blustered de Latte.  "Now, what about the musketry? 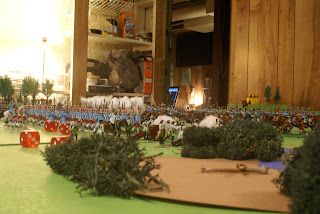 Here's a worm's eye view of the same firefight from the southern edge of the battlefield.


"As far as musketry is concerned," began von Tschatschke, pouring himself another brandy,  "twelve of my Leib Grenadiers in the front rank fired on your charging hussars.  I threw a die for eight of them, rolling a 4, and another for those extra four figures, a 3, halving the results for the latter.  So, if I have everything worked out correctly, it looks like my musketry scored 5.5 hits, which is halved on cavalry targets, yielding 2.25.  Does this sound correct to you?  Or should we round down in the interest of preserving our sanity?"
"Oh, round down I should think in the name of sanity by all means," concurred General de Latte, blowing smoke rings toward the parlor ceiling.  "So, how many casualties do my hussars take from all of these volleys and salvos?  Mathematics was never my strong suit back at school you know."
"Umm. . .  Five altogether if we have figured everything correctly, old courgette.  Do you want to remove them yourself, or should I?" added von Tschatschke with a leer.
"Humpf!" replied General de Latte, handing over the five hussar figures.  "I didn't really need them anyway.  Now, how about that melee?"
"Melee away, my dear de Latte, melee away!" cajoled von Tschatschke.  "That reminds me of the time I rode with a Colonel von Adalnowski and a Major von Topfsange against the Austrians back in '40.  Have I ever told you about it?  A simply smashing time. . ."
"Quite often, I am afraid," interrupted de Latte abruptly from his side of the table.  "But don't let that stop you.  Far be it from me to stand in the way of a good story!"
"Well," began von Tschatschke, gazing dreamily across the room, "It all started during a long weekend at the Colonel's country estate in the Tatras, where von Topfsange and myself were guests, in the spring of 1740.  And the colonel had a housekeeper.  A Frau Erdbeeren, to whom we privately referred as Vivian l'Vivandiere. . ."

Jiminho said…
This is a terrific rendition of Sittangbad. Your figures look wonderful, especially those hussars you slaved over!

Anonymous said…
Who's figures did you use for Grand Duchess Sonja's Own? They sure do tower over their fellows!

Also, should cavalry hits be halved? Hitting the horse or hitting the man puts them out of the fight.
10:46 PM

Mark Dudley said…
I can almost smell the heavy sweet aroma of brandy and see the whiff of cigar smoke in he air.

Heinz-Ulrich von Boffke said…
Thank you everyone for your kind words! It is truly a blast (Ahem!) to have completed this project (finally), have the chance to play with them, and share it with like-minded souls. Do make sure to tune in again soon for further developments.

Rob -- The Leib Grenadiers are RSM95 Prussians, and thy do indeed tower over the Revell plastics and Minden hussars. . . As all good Prussian grenadiers worthy of the name should!