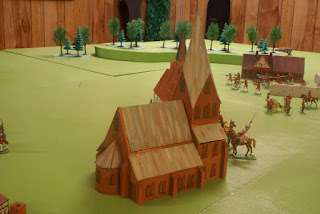 Here is a reprise, from July 2011, of the most complicated scratch-built structure I have attempted to date. . .  A generic North German (probably Lutheran) church, based on many I have seen firsthand over the years in places like Luebeck, Flensburg, Bremen, and Hamburg. 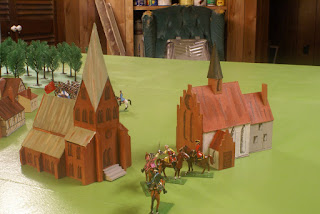 Here is another photo, showing the same generic North German church at left along with a similar, but structurally much simpler building from January 2010, which can serve as either a second North German/Flemish church, a Rathaus (town hall), or another such municipal building.  I've had lots of fun over the last few years designing and assembling buildings that are not commercially available.
Thank you everyone who has had a look around here at the GD of S blog the past few days and left encouraging comments about my figures and table.  One of you asked for more material on my buildings and how I've, well, built them.  Here is a link back to a series of posts from January 2008 on how I typically do that.  And another link back to a series of posts, in which the process is mentioned again, from January 2010 when another building boom hit the Grand Duchy of Stollen.  There are other posts on the construction of my buildings here and there.  Just have a look around the blog.  I have re-implemented a search function too, below the blog archive at right, so you can type in search terms like 'houses,' 'buildings,' 'built up areas,' and the like and see what turns up.

Will Scarvie said…
Hey thank you! I just finished reading the back postings (not to mention lots of others I found along the way) and am all inspired to make some buildings. Thanks again.
6:34 PM