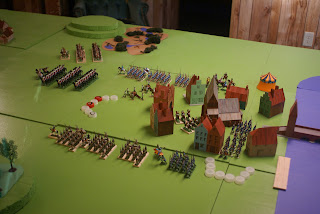 Here, we see the Stollenian Army marching out of Neu Sittangbad to meet the Zichenauer foe, led by the dastardly General Phillipe de Latte (played by the equally dastardly Greg Horne of the Duchy of Alheim).  Note the improvised field works and wharf at the riverside.  Both are due to be replaced ASAP this weekend. 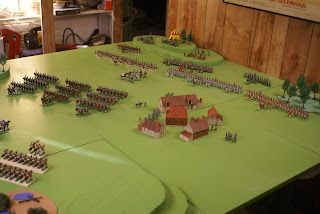 Next, we see the early Zichenauer positions at the other end of the valley.  And it looks like Stollen's Jaeger zu Fuss have been caught far out ahead of their main body.  This doesn't look good given their apparent disorder, no doubt brought on by the panic and surprise at waking so close to the enemy lines this frosty February morning. 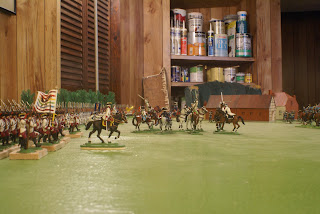 Here is a close-up of General de Latte's second line, consisting entirely of infantry, his premier brigade in fact that is made up of the Ermland Garde (The Newts) in the foreground, von Flickenhoffer's Fusiliers in the middle distance, and the red-coated Voluntiere aus Mittau in the far distance.  Yikes! That's General de Latte in blue at the center of his officers by the way.  Doesn't he look like a nasty piece of work? 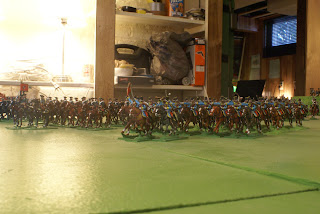 De latte also has the advantage of a strong cavalry brigade, consisting of horse grenadiers, dragoons, and hussars, right now in his front line very close to the Stollenaian cavalry. 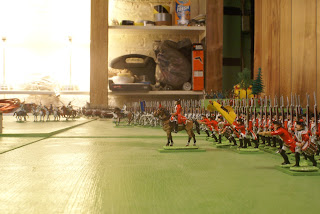 Here's another shot of Zichenau's second line with the Voluntiere aus Mittau in the foreground. 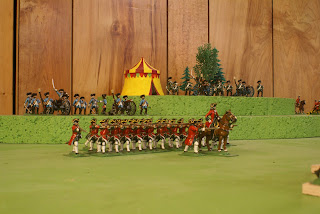 Here is part of Zichenau's second and third line -- O'Malley's Irisg Grenzers and his three batteries of the Most Honorable and Efficient Electoral Artllery.  The Stollenian cavalry will want to steer clear of them! 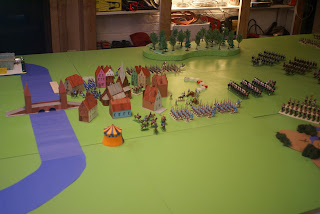 Finally, here is another picture of Neu Sittangbad and the Stollenian positions with and around town.  You will also observe the Blau Zwischen River and the toll bridge over it along with the improvised wharf beyond.  At the far right of the photograph is the improvised marsh, which we -- Greg and I --  have decided to make passable to infantry but at only 3" per move to reflect the hard going through the muck, briars, and other undergrowth.

I had no idea that Greg Horne was "dastardly", I'd always had a very positive opinion of him.

Dastardly, eh? I'll have to think about that one.

This is exactly the sort of "Old School Wargaming" that both appeals to me immensely and scares me witless (at the thought of having to paint those huge units).

Ross Mac rmacfa@gmail.com said…
And a truly marvelous and joyous sight it is. Aren't you glad that this is the game?

So which one is Latte? The little short guy in blue on the pony?
9:22 AM

Goldwyrm said…
I love the line of bayonets and the thundering mass of cavalry you've presented for our viewing pleasure. Looking forward to the post battle report.

Heinz-Ulrich von Boffke said…
Thank you for the kind remarks, men! General de Latte is, of course, the taller gentleman on the white horse. The smaller guy on the pony is some insignificant aide de camp or other whose name has been lost to history.

I aim for a dastardly air at every opportuity.

Ross, how could you mistake me for the dwarf on the pony! I am the Elegant RSM figure as well you know.