The Game is Afoot Once Again! Move Two Melee and Artillery Results. . . 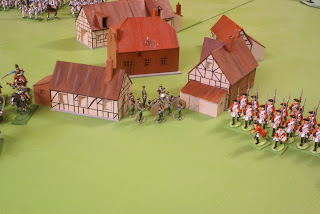 The Stollenian Jaeger zu Fuss, within and outside of Eispicke Village have not fared well during Turn Two.  The red-coated battery of Zichenauer artillery on the hill at the eastern end of Sittangtal (remember them?) fired on the village once again this turn.  This time, however, they found their correct range, and inflicted two casualties on the enemy troops holding this isolated group of half-timbered wattle and daub structures. 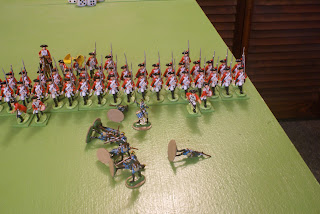 Elsewhere in the same vicinity, Zichenau's dastardly, though dashing, first squadron of hussars wreaked havoc among that isolated platoon of Jaeger zu Fuss, inflicting six casualties in bloody melee before retiring the requisite 12" to rally and regroup. 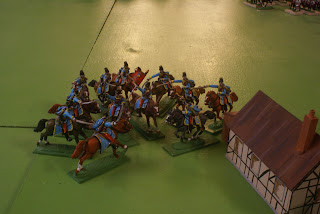 And here we see those smug ruffians gathering around their colonel and guidon just outside the northeastern edge of Eispicke Village.  No doubt, they are bent on spreading more panic and confusion elsewhere along the Stollenian lines during subsequent turns.
"Oh, I say!" exclaimed General de Latte, "Your jagers have taken a damned good whacking this go around old boy.  Time for you to get serious about things like winning, eh?"
"Er, what?" answered General von Tschatschke in a fluster.  Is that brandy on the tray over there, old shoe?  How about a snifter of that for the old tactical abilities?"
"By all means," replied de Latte.  "Help yourself, but I'm afraid you'll need more than that now that the rest of your jaegers are pinned down in Eispicke Village.  A Cuban cigar would be just the thing, I think."
"Oh yes," said von Tschatschke, warming to the idea, "That would do nicely.  Shall we agree to start Move Three then?"
"Move Three it is, then, old boy," said de Latte with a smirk.  "Here are your cigar and matches.  Do help yourself to the brandy.  There's a good chap.  Snifter glasses are over behind the bar.  Now, how about those orders?"

Ross Mac rmacfa@gmail.com said…
Its those dashing uniforms on those Hussars. Makes 'em want to show off.
Glad you painted 'em?
8:39 PM

johnpreece said…
I don't know if you think this game has been worth the years of work you have put into it but I can tell you I certainly do.

It is a real treat to have time to relish the gradual development. Watch out the wife doesn't suddenly want the spare room back because your in laws are coming to stay.

Heinz-Ulrich von Boffke said…
Glad I painted them, Ross? Yes, they certainly add some color to the table though they are certainly causing problems for my jaegers.


The in-laws, John? Bite your tongue! Otherwise, yes, the game is great fun so far.

I couldn't agree more on the hussars.

All this talk of cigars makes peckish for a smoke.
2:24 PM