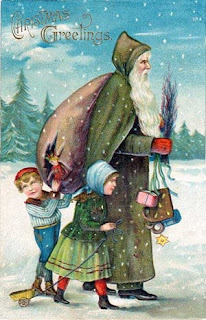 Yet another seasonal image of Saint Nick, once again in Green robes, strolling across a wintry landscape with a couple of presumably well-behaved children.
Where does the time go?  Yesterday was a little on the busy side, so I wasn't able to make an entry here.  However, the Grand Duchess and I did manage to escape for a couple of hours to have coffee and non-child centered conversation at one of our local cafes thanks to the good graces of one of our three regular babysitters.  Young Master Paul and his friend Miss B. went to the Nearby Children's Museum just up the street from the cafe, where there are all kinds of interactive exhibits that appeal to toddlers and primary grade aged children.  I'd almost forgotten what conversation about other things was like, and it was a nice way to kill a couple of hours.
We met them at the appointed time, picked up the Young Master and brought him home for lunch and his nap, during which time I was shamed by the Grand Duchess into taking care of a final bit of work out in the front and back yards, to prepare for the onset of winter.  It really wasn't that bad though, and it felt kind of good to bundle up and get out into the cold air for a few hours of quiet, fairly mindless activity.
Once the Young Master was up, he and his mother ran a few errands, so I managed to snatch an hour or so late in the afternoon, to come down here and work on the current batch of five figures, which are getting very close to completion now.  Really just some brown/black lining and touch-ups, which hopefully I'll have time for later this afternoon.
At any rate, it was suddenly dinnertime for Young Master Paul, followed by bedtime (both my turn yesterday evening).  Uff!  Bedtime has recently become a sometimes arduous process because the Young Master is at the stage where he gets very wound up late in the day.  More often than not, that results in lots of struggling and laughter that turns into screaming as you try to undress him and get him into pajamas.  It can turn a normally 10-15 minute process into a half-hour ordeal that is simply exhausting, and makes me think "Why on earth did we do this?!"
The Grand Duchess and I followed with a nice quiet dinner at about 7:30, coffee (complete with several hilarious and unintentional puns made by the Grand Duchess), and an interesting discussion post-meal about the precise definitions of a few different words, during which the Grand Duchess fetched a dictionary to settle the matter.  Yes, yes.  We're both real nerds that way.  Living out there on the bloody edge and all that.  Anyway, the rest of the evening was spent decorating the two Christmas trees.  One is a very tall fancy tree with lots of pretty, quirky glass ornaments of various kinds and white lights, and the other a smaller tree in the dining room for family ornaments from the Grand Duchess's childhood, also illuminated with white lights.

All of the decorating was accompanied by seasonal music played at a soft volume and copious amounts of eggnog.  I used to drink this intoxicating golden elixir like a fish as a boy and younger man at this time of year, but staying trim is not as easy as it once was, and eggnog does not help in that endeavor!  Before we knew it, it was after 11:30pm, the Grand Duchess was yawning hugely, and it was time to retire for the evening.  I read a short story until I couldn't keep my eyes focused and finally gave up, turning out my bedside lamp at about 12:30am this morning.  You know you're tired when you read the same paragraph three or four times, and it still does not make sense.
While I am getting the Young Master up and serving him breakfast in about an hour (8am), I hope to have a bit more time to putter around at the painting desk here in Zum Stollenkeller today, finishing those five figures, maybe taking a photo or two of them, and preparing the next five with a couple of white basecoats.  Now that the trees are decorated, the stockings hung, and the poinsettias arranged on the mantle, things have settled down somewhat, and we can enjoy a fairly quiet week before the arrival of Christmas in earnest.
Now, you are probably thinking to yourself at this point, "Great, Stokes.  An absolutely riveting post.  Wake me when it's over!"  True, this entry has very little to do with painting model soldiers and wargaming.  But maybe it's healthy to get away from the painting table for a little while and experience some real life occasionally.  You know?  To come up out of one's gopher burrow now and again and have a look around at other things, gaining a little necessary perspective in the process as one of my grad school professors at the University of Minnesota used to suggest.  And it's awfully easy to get caught up in our soldier hobbies and imaginary activities, but that risks coming at the expense of missing out on other things like family and shared experiences.  And if I never emerged from the confines of Zum Stollenkeller, I'd miss out on the delicious, delightful, and delovely Dresdner Stollen that the Grand Duchess will prepare later today! 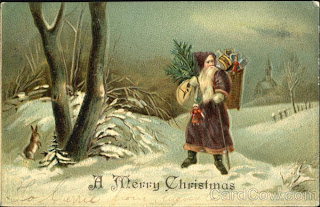 Santa Claus in brown robes (or purple?) again.  For some reason, this particular card reminds me of the winter landscape in southeastern Pennsylvania where I grew up in the country, about two hours in those days, outside of Philadelphia.  And there were quite a few Decembers in the 1970s and 80s when the snow arrived very early in the month and remained on the ground into March.  One year, we accrued so many missed days of school due to snow that the schoolyear was extended into late June just to make up the lost time.  Excruciating!