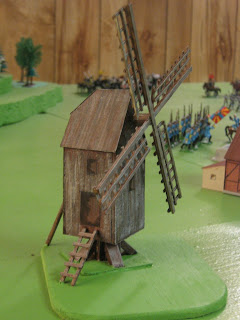 A windmill model completed here at Stollen Central during May-June 2011.
At long last, I'll wrap up painting on the bridles, reins, and martingales for those nine Minden hussars today, and then it's full steam ahead with the final group of nine figures/horses.  I must admit to feeling a bit pleased about the way these are coming along.  The batch I'm almost finished with has turned out even more nicely than the first dozen.  Watch for a photo here in the next day or so.
In the meantime, here is a picture of a small side project I completed early in the summer.  This slightly underscale model windmill is based on a photograph of several old mills that now reside at an open-air folk museum in Estonia, found online, which seemed appropriate for the Grand Duchy of Stollen since that geographic entity is supposed to have been somewhere in the Baltic region of Europe.  While not actually functioning, my windmill provides some nice visual interest for the tabletop and seemed like a necessary addition to all of the townhouses, churches, civic buildings, and farms that I've cobbled together in the last few years.
The materials used for its assembly included my usual bits and pieces of balsa wood along with some heavy cardstock and Elmer's Wood Glue, which grabs faster and holds better than Elmer's normal white glue.  The veins of the windmill were made from a couple of those wooden stirring sticks found in so many cafes around the world these days.  They actually came from a locally owned place here -- The Coffee Hound -- that we prefer to the ubiquitous and generic Starbuck's.
Anyway, the only tricky part of the construction had to do with the windmill veins as you might guess since tiny bits of balsa were attached to the former coffee stirring sticks using super glue and tweezers.  You don't want to get any of those small pieces stuck to your fingers and risk messing up already completed work!
Once everything was assembled and finished, the model was glued to it's base and painted with a variety of acrylic browns and grays.  It was finally dry-brushed with white before a few details were picked out with an extra fine black felt-tip pen.  And there is your windmill Senor Quixote!
On a totally unrelated note -- and where does the time go? -- Young Master Paul celebrated his second birthday this week by walking on his own, without holding onto Mom or Dad. . .  FINALLY!  While I haven't been too worried about this particular issue, figuring that it would sort itself out eventually, the unusually late walking has caused the young Master's mother and his pediatrician a great deal of anxiety, judging by the amount of conversation and comment on and around the subject for the last year.  Maybe now, we can move on to the next stage in his development, whatever that might be.
In any case, Paul's finally deciding to walk from the kitchen into the dining room to the stereo yesterday afternoon -- he is already a fan of Miles Davis, John Coltrane, and Diana Krall -- helped make the birthday celebrations even more special here in the Grand Duchy of Stollen.

marinergrim said…
Children develop at their pace not that of the parents (my two were so different one walked early one talked early).
The windmill looks neat. So many options for its use in so many periods.
12:19 PM

Chris Gregg said…
A very nice windmill, Sir. Yes I've found those coffee stirrers very useful for the same sort of job. You may care to view one of my Northern European post windmills at the head of my blog
http://notjustoldschool.blogspot.com/
This is based on design from Belgium, near Bruges.
Chris
12:27 PM

Fitz-Badger said…
Wow, the windmill looks excellent! That's going into my "inspiration" folder for sure.
Happy birthday to Master Paul (I always figured it was best to leave the young'uns to learn to walk in their own time frame - they'll be getting into trouble soon enough! ha ha). 2 years already!?
1:19 PM

Have you considered a concoction of brandy, horse linament and gun powder?