Now, where did I leave that paintbrush? 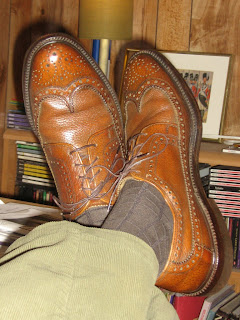 A pair of new shoes, won recently on Ebay.  Vintage Florsheim Imperial Wingtip Brogues in Tan. . . for the rediculously low price of US$ 20.00!  Can tweed 'plus fours', knee-length Argyll socks, and a long weekend at Aunt Agatha's be in the picture?


May Term ended today, and none too soon.  It's always a great deal of fun sharing my love for all those old 1940s and 50s films noir with undergraduates in their late teens and early twenties.  It is also a great deal of work reading and preparing nightly for almost a month of daily three hour classes, reading through student assignments, and so forth.


It is, therefore, with great internal fanfare that I celebrate my final day in the classroom. . .   at least until mid-August rolls around again!  Time to get back to more important things like painting model soldiers and pushing them around the gaming table in their hundreds.  Along with somewhat more routine nattering on about it here on the Grand Duchy of Stollen blog than has been the case during the last few months.


We have the first long weekend of the summer coming up here in the United States -- Memorial Day Weekend, and I have already informed the Grand Duchess that some of it will be spent painting those darn Minden hussars that have sat gathering dust on the painting table behind me since March.  She seemed strangely agreeable to the idea, which makes me wonder uneasily what might be percolating within her own mind.  We have been together, more or less, for about ten years now (married for five at the end of next month), and while I think we know each other pretty well at this point, one can never be entirely sure what thoughts and potentially nefarious deeds might be lurking in the recesses of others' noggins.  As the great Michael Caine stated in the lukewarm 1984 farce Blame It on Rio, "You just never know!"


In the meantime, take a look at what I found and won on Ebay a couple of weeks ago.  Maybe not to everyone's taste in footwear, but I've been after a pair of tan brogues for some little while, and they returned from the cobbler's yesterday afternoon, where I took them for some refurbishing and a shine.  Normally, I shine my own shoes, but these needed extra care to get them back into presentable condition after I took delivery a week or so ago.
Now, if these strike you as too fancy, that's fine.  To each, his own.  Remember that I am something of a clothes horse, as I have mentioned previously here and there on the Grand Duchy of Stollen blog.  An appreciation for sartorial splendor is, after all, one of the driving forces behind this rather odd assortment of posts on model soldiers and painting them, wargaming, tabletop scenery, bicycling, Nordic skiing, and etc.

And hey, at least my new brogues aren't the ubiquitous athletic shoes, what we used to call 'sneakers' back in the 70s and 80s, or the much hated 'comfort shoes' with man-made soles that can't be replaced and velcro fasteners.  I cringe -- CRINGE, I tell you -- every time I catch sight of some poor schlubb ambling along in those kinds of shoes.  While I understand that orthopedic issues force shoes like this onto some individuals, who might prefer to wear something a bit more attractive, I'll stick to lace up shoes with leather uppers and soles as long as I'm physically able, and as long as you can still find them for sale.  It's just one of those things.

Brigadier Dundas said…
Man I'm envious; those are some nice shoes!
Well played on the old E-bay.
As a former teacher I can understand the delight the summer expanse offers to toy soldier enthusiasts.

Heinz-Ulrich von Boffke said…
Thank you, men! Yes, they are charmingly old school, aren't they? I feel almost like a latter day Bertie Wooster when I have them on my feet.

Bluebear Jeff said…
Ah, nice. They do look splendid . . . and sort of harken to an earlier more civilized era, don't They?

Der Alte Fritz said…
As Fernando once said, "it is better to look marvelous than to feel marvelous".

Nice clogs. Buying them on eBay seems a little bit risky as you can't be entirely sure that they will fit properly.

I wouldn't call them Old School though, I wear wing tips all the time in the banking business. :)
9:18 PM

Conrad Kinch said…
Looking sharp. I must retire my battered brogues. I only several pairs of running shoes, but curiously enough I only ever wear them for running.
4:07 AM

marinergrim said…
Nice shoes. Vintage styles have more apeal than the modern ones for me too.
6:27 AM

Happy to learn that we share, more or less, similar tastes in footwear! I really, REALLY like these shoes and delayed taking them off for as long as possible yesterday before finally retiring them to the wardrobe (with some cedar shoe trees inside) for a few days of rest. Yes, it can be a bit risky purchasing shoes online without trying them on first, but since the as a 9.5A (narrow width. . . akin to 42-43 in Britain and Europe, I think), I figured I would take the plunge since I wear a narrow shoe anyway, and narrow width can sometimes be hard to find. The price was simply too good to pass up as well. Jim, I must ask. Allen Edmonds? Johnston Murphy? Or Church?