It's almost time for stollen here in the Grand Duchy!!! 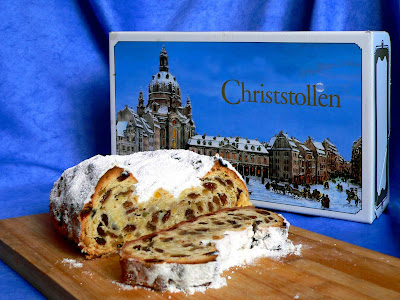 A genuine Dresdner Stollen, much like the ones the Grand Duchess bakes every December. Indescribably delicious with a cup of fresh coffee, and I look forward to it all year.

In honor of Advent and the Christmas season, it seems like a good idea to give a brief nod to the origins of the Grand Duchy of Stollen, which had its genesis during early December 2005. At that time, I was looking around for something different to do on the wargaming front -- my 15mm Waterloo-era Napoleonics had worn out their welcome -- when it occurred to me that I might finally address a long held desire to start and complete my own big battalion project, inspired by Charge! Or How to Play War Games, first read in June of 1994.

At the same time, I stumbled onto Greg Horne's Duchy of Alzheim blog as well as the Yahoo Old School Wargaming group. The former was detailing the build-up of two Seven Years War forces using, primarily, the wonderful RSM95 castings produced by the Dayton Painting Consortium in Ohio, USA. Good stuff! The latter was abuzz with planning and over-the-top enthusiasm for the coming Sittangbad refight, planned for the May 2006 Partizan show.

Suitably inspired, and as is the case for almost any wargamer, I immediately began working out on paper how to build two modest armies plus an imaginary campaign context into which they might fit. My wife, then fiancee, was busy that particular afternoon baking a couple of Dresdner Stollen in the kitchen across the hall from my office in our old apartment, a good excuse to stay close by! When all of the sudden, it struck me like a bolt from the blue. My semi-fictitious setting would be called the Grand Duchy of Stollen, opposed by the adjacent Electorate of Zichenau (Zichenau was the name of an old German town in the former East Prussia), and the two would be surrounded by a few smaller, though equally inconsequential, contentious principalities. "Yes, that's it!" thought I excitedly, and the Grand Duchy of Stollen campaign was born.

So, what in the world IS stollen anyway? Well, here is a fairly concise explanation and history, taken from a December 2006 posting here on the Grand Duchy of Stollen blog, though I found it on Wikipedia. Enjoy! Tomorrow, I will post the actual recipe for this delightful and subtly sweet, crumbly Christmas bread -- And thanks for the suggestion, Jeff!

According to the Wikipedia entry on it, stollen is:

A bread-like cake traditionally made in Germany, usually eaten during the Christmas season as Weihnachtsstollen or Christstollen. Stollen (originally Striezel) was created in Dresden in around 1450, and the most famous Stollen is still the Dresdner Stollen, sold, among other places, at the local Striezelmarkt Christmas market.

Stollen is a light airy fruitcake made with yeast, water and flour, and usually dried citrus peel (called "Zitronad(e)), dried fruit, almonds, and spices such as cardamom and cinnamon; the dough is quite low in sugar. The finished cake is sprinkled with icing sugar. The traditional weight is 2 kg, but smaller sizes are now available.

The old name Striezel was from strüzel or stroczel, "awaken" (Old Prussian: troskeilis), which came to mean "loaf of bread". The shape of the cake was originally meant to represent the baby Jesus wrapped in swaddling clothes, and was one of a number of baked goods created to represent aspects of the Crucifixion: the pretzel represented Jesus' bonds, and the (holeless) doughnut (Pfannkuchen) represented the sponge given to Jesus on the cross. However, the Stollen reminded Erzgebirge miners of the entrance to a mine tunnel, which is the literal meaning of Stollen, and they renamed it.

When Stollen was first baked, the ingredients were very different. The Advent season was a time of fasting, and bakers were not allowed to use butter, only oil, so the cake was tasteless and hard. In 1647, Prince Elector Ernst and his brother Duke Albrecht decided to remedy this by writing to the then Pope, Pope Innocent X. They explained that Saxon bakers needed to use butter as oil was so expensive and hard to come by, and had to be made from turnips, which was unhealthy. The Pope granted the use of butter without having to pay a fine - but only for the Prince-Elector and his family and household. In 1691 others were also permitted to use butter, but with the condition of having to pay annually 1/20th of a gold Gulden to support the building of the Freiberg Cathedral. The ban on butter was removed when Saxony became Protestant.

Over the centuries the cake changed from being a simple, fairly tasteless "bread" to a sweeter cake with richer ingredients such as marzipan, although the traditional Stollen is not as sweet as the copies made around the world.

Today the cake is available in many parts of the world. The true Dresden Stollen, however, is produced in the city and distinguished by a special seal depicting the city's famous king, August the Strong. This "official" Stollen is produced by only 150 bakers.

Every year in Dresden a Stollenfest takes place. This recent tradition has taken place only since 1994, but the idea comes from the days of August the Strong in the 18th century: the king loved pomp and feasts, and in 1730 impressed his subjects with a giant 1.7-tonne Stollen big enough for everyone to have a portion. Today the festival takes place on the Saturday before the second Advent Sunday, and the cake weighs between three and four tonnes. A carriage takes it in a parade through the streets of Dresden to the Christmas market, where it is ceremoniously cut into pieces and distributed among the crowd, for a small sum which goes to charity. The largest Stollen was baked in 2000: it weighed 4.2 tonnes and is in the Guinness Book of World Records.

Bluebear Jeff said…
*Sigh* . . . it sounds delicious, Stokes. And I like the "history" of the Grand Duchy too.

I'm sure that your reprint of the recipe tomorrow will get copied a number of times . . . with tasty results around the globe.