Another seasonal entry today? Why not! 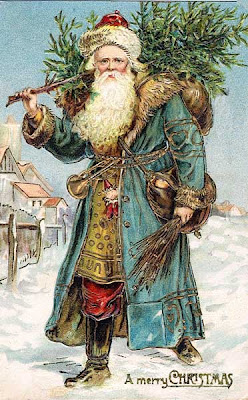 Here is a Victorian-era Christmas card illustration of ol' St. Nick that is of particular interest thanks to his blue robe and yellow tunic beneath it. Typically, we see Santa Claus/Father Christmas portrayed in red, or once in a while in dark green, nowdays. But light blue and yellow? And presumably, those are switches in his left hand, to leave for the occasional naughty boy or girl.

It occurred to me a while ago that the sort of fourth anniversary of what has gown into the Grand Duchy of Stollen project has almost passed by without any notice. So, let me take a moment or two to reaquaint everyone with how the project began.

Back in the summer of 1994, I purchased a paperback reprint of Charge! from Caliver Books in the U.K. and fell instantly head over heels for those imaginary large units of 18th century miniatures that fought against each other across a minimally terrained table. "This is it!" I mused. Sadly, I was packing to leave Pennsylvania later that very summer for Madison, Wisconsin, to continue my studies at the University of Wisconsin, so all thoughts of doing something similar with my wargaming hobby were shelved for over a decade.

Fastforward to early December 2005, and on a whim I was tooling around on the computer, typing in search terms like "old-fashioned wargaming", "classic wargaming", and "old school wargaming" when what to my wandering eye should appear but two related web finds. First, was the Old School Wargaming Yahoo group, which was in the midst of excited discussion about the forthcoming refight of Sittangbad by Phil Olley, Henry Hyde, Steve Gill, and John Preece at Partizan 2006. There was lots of animated talk about classic 30mm figures, unit size, wargaming the mid-18th century, Charles Grant, Peter Young, bounce sticks, cannister cones, and the like. Needless to say, I was hooked and spent considerable time clicking back through and reading the earlier archived posts there.

A day or so later, I also stumbled onto Phil Olley's former War Cabinet website. While the entire site was fascinating, it was the "Classic Wargaming" section of Phil's site that really did it, since that featured photos of his classic mid-18th Century Spencer Smith and Stadden figures all lined up on a plain, green table along with a few well-placed Charles Grant-esque buildings and even a bounce stick in the photo or two! Instantly, I thought, "Now's the time to rekindle that interest from over ten years ago and do something similar myself!"

A few days later, while the Grand Duchess baked one of her Dresdner stollens across tha hall in the kitchen of our old apartment, it occured to me that my own imaginary 18th Century project required a name. And suddenly, it hit me like a bolt of lightning from out of the blue -- The Grand Duchy of Stollen! I spent the next ten days or so before Christmas fleshing out my initial idea, placing the Grand Duchy and its mortal enemy the Electorate of Zichenau along with a few tiny principalities just to the northeast Prussia, in the region of present day Lithuania, during the late 1760s. Stollen and its neighbors occupy an insignificant, nebulous, quasi-Germanic area that was swallowed up during the final partition of Poland and has somehow been forgotten by the the history books on the area.

The rest of the Grand Duchy of Stollen story is all here for those who want to look at those August and Septembert 2006 posts. By the way, I think this is my 699th posting! So, let me take the opportunity to thank everyone of you Stollen regulars and occasional visitors for your continued interest in my holding forth about this or that -- and not always wargaming or painting related I realize -- plus your occasional comments, suggestions, and critique. Here's to continuing all of that in the coming year!

Bluebear Jeff said…
Ah yes, thank you for the recap . . . and I think that EvE has helped along the way as well.

Stokes, last year you posted a photo of a most lovely tree at Stollen Central . . . and since yesterday you were to get this year's tree and do some decorating, perhaps your 700th post could feature a photo of this year's Stollen Tree . . . (not to suggest that it was stolen, of course).

Fitz-Badger said…
Stokes, your blog was one of the things that got me interested in doing 18th century ImagiNations. So I guess, as they say "what goes around, comes around". Thanks for sharing your world with us! :)
7:44 PM

Mosstrooper said…
As a occassional visitor to this site I would like to thank you for all the insperation you have given me over the last year , being somewhat of a wargaming butterfly ( aways flitting from one project to the next ) I find your single mindedness refreshing . I would like to take this oppertunity to wish you your family and all the other visitor to this site a Merry Christmas !
6:48 AM

tidders2 said…
Wow thats a lot of posts, many more than I've managed :)