Two Orders of Old School Figures on the Way to Berlin!!! 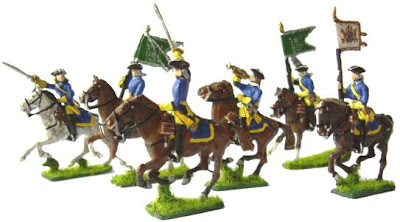 These are a few of the wonderful Holger Eriksson cavalry, very similar to those I've ordered, from Peter Johnstone, the man behind Spencer Smith Miniatures in the Great Britain. The photograph above comes from the Tradition website.

Well, I've bitten the bullet and actually sent off my orders to Rob Young at Garrison Miniatures and Peter Johnstone at Spencer Smith Miniatures and paid for everything via PayPal (a very handy innovation I must point out). Before too long, the extremely patient and long-suffering Grand Duchess will observe yours truly unwrapping the respective orders (30 HE cavalry and two dozen or so artillery crew) in our Berlin apartment sometime in June. Gosh, the new month begins tomorrow! Where did May get to?

The last week has been a busy one with not much time left for figure painting or gaming. But I did manage to take about ninety minutes late Monday or Tuesday evening before bed to apply fleshtone to the final 20 RSM Prussian fusiliers on the painting desk behind me in Zum Stollenkeller. Some painters leave the flesh until last, which I too used to do, but I have found that painting fleshtone is not the most exciting part of figure painting. Therefore, I like to do it very early in the painting process, which has the added advantage of making the figures look even more like tiny men all dressed in black for the moment. Kind of like twenty tiny Johnny Cashes in fusilier caps! ;-)

My Scandinavian film course concluded on Friday afternoon. I always feel a tiny bit sad at the end of May Term. I tend to draw very good, highly thoughtful, and engaged students for these 3.5 week courses. We meet five days a week for three hours at a time and have all kinds of interesting discussions about the movies we see, our related reading, and even a few laughs along the way. So, it's little surprise that I become a bit fond of our daily meetings and my students as individuals. And then, all of the sudden, we're finished. It's great to have almost three months of free time ahead of me, of course, but it is a little sad too since I won't see some of my students until late August. And some have graduated, so I won't see them again. Strange. This is a side of teaching that was never discussed in graduate school.

The translation corrections are all done and returned to the publisher. Hopefully, I'll have proofs to read through one more time by late summer or early fall, and then the book should go to print. It is a satisfying, though at times strange, experience doing a book-length translation. What was a bit frustrating, though, was the fact that there are so many "cooks" with their fingers in the stew. This means that, although no one at the publisher has any knowledge of Norwegian, several people had opinions about the "best" way to translate certain passages. And then there was the author in Norway. At times the various suggestions put to me bordered on the pedantic, but I think everything is ready to go now, so it's time to look forward to the next translation project, which should be interesting. This time, a philosophical work if memory serves me correctly.

As some of you will know, the Saegewerkdorf game between Jeff Hudelson and me has langushed for the past few weeks. I hope we can get in another turn or two this week since I must put all of the soldiers and scenery away next Sunday before leaving for Berlin on June 9th. The reason for this is because I am restricting the Grand Ducal Feline, Princess Rannveig, to the basement in our absence, and I don't want any soldiers left on the table where she will undoubtedly sit for much of the time, swishing her lethal tail. Longtime readers will possibly remember a late-2006 post in which I mentioned the kidnapping of a plastic artillery man by our cat too, so I don't want to leave any of the figures open to possible feline molestation now. Kitty can be very spiteful when she is upset! This means that Stollen's General von Drosselmaier will either have to deliver a stroke of military genius in the next turn or two, or concede the battle to his tactical better, the vile Stagonian General von Drednoz.

And now, enough prattle. I have final grades to tally and submit before I mow the lawn and water plants. And by the way, this is apparently my 600th post since starting this blog in late August of 2006. Who would ever think there would have been so much to go on and on about with regard to reading classic wargaming authors/personalities, collecting model soldiers, painting them, modeling scenery, building a table, and wargaming with all of it over nearly three years? "Charge!" I say.

Bluebear Jeff said…
Ah, Stokes, do you still have the move that I sent on May 18th? Or do I need to re-send them?

I agree, by the way, on painting flesh first. It really starts to bring the figure 'alive'. That's always the first thing that I paint (and precisely for the same reason).

Fitz-Badger said…
I often paint at least the basecoat of flesh early on, too. For practical reasons - sometimes referred to as painting from the "inside out", starting with the skin, then things like neck stocks and exposed shirt cuffs, then trousers and vests, and so on. It's easier to keep things neat that way.
8:53 PM

littlejohn said…
Stokes, I really hear you on the life of an academic...can be oddly disconcerting to get so deeply involved in student's lives and then to have them graduate or move on to upper years...very odd indeed. I teach architecture students and it happens exactly like you describe...
10:44 PM