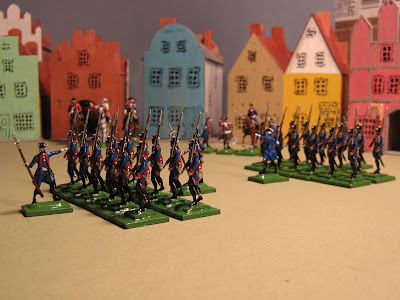 Army of Zichenau on the Move Northward!

Zollamtstadt, the Grand Duchy of Stollen – 20 July, 1768-- Recent reports by Stollenian officers along the frontier indicate that the Army of the Electorate of Zichenau, under General de Latté and General von Kallweitschen, is on the move north along the post road from the small town of Zollamtstadt where it defeated a small Stollenian force under General von Drosselmaier in late December last year. Since that time, the army of Zichenau has trained diligently in the country around Zollamtstadt.

Army of Zichenau Augmented by Newly raised Battalion of Pioneers

Most recently, a battalion of pioneers has joined the army, which now consists of three units of infantry, a powerful body of horse grenadiers, and a battery of artillery. Under de Latté and von Kallweitschen, this force has been ordered by Pricess Antonia of Zichenau to penetrate into the Stollenian interior and seize the contested before pressing on toward the Stollenian capital Krankenstadt.

So far, there has been little sign of activity from within Stollen itself. The Grand Duke Irwin-Amadeus II was, for a while last winter, very engaged with the training and preparation of his army following its defeat at, and withdrawal from, Zollamtstadt. Since late June, however, he has reverted to the high jinks of last summer. Indeed, an anonymous source in the Stollenian ministry has suggested that it is really the Grand Duke’s English valet “Hives” who has run the affairs of state since the very public incident earlier this month, involving his charge, the top half of the Grand Duke’s lobster costume, three dancing girls from the local theater, 12 loaves of bread, and a pair of old boyscout shoes.

Meanwhile, the Army of Stollen, under the recalled General von Drosselmaier, has been positioned along the frontier between the Grand Duchy and the southern with orders to hold the territory and block the advance of de Latté and von Kallweitschen. How matters will develop over the next few weeks remains to be seen, but the Prussian ambassador to Stollen, Heinz von dem Salat, mentioned, during an interview with Die Krankenstadt Tageblat, that the situation for Stollen looks grave unless the defeat of last winter can be reversed.

Fitz-Badger said…
Great minis, as usual! You do capture that old-school gaming look very well!
Interesting news items, too...
The League sends best wishes for the future of Stollen! Looks like things might be heating up in the League. The Batrachian forces are building and training aggressively.
4:47 PM

tradgardmastare said…
Interesting times - I look forward to further developments.
Alan
p.s
I am lookin for info re topological meanings of the ending of German places names - can you help?
Alan
12:37 AM

Bluebear Jeff said…
I suspect that Furst Bruno von Ursa would be willing to send you some support (officers or troops) if asked.

Steve-the-Wargamer said…
...it was the news about the boy scout shoes that truly alarmed me - things have taken a turn for the worse, haven't they?!