Weekend Painting Goals Met (For Once)! 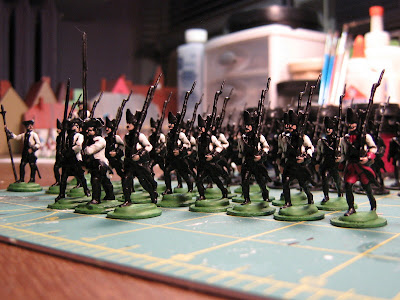 Happy September everyone! I actually met my painting goals this weekend, as seen in the photo above. The poor Grand Duchess was sick in bed with a cold, so I had a few extra hours here and there. Therefore, you’ll notice that I painted the flesh areas of about 20 figures, along with the green bases and white coats -- as I stated I would do late last week.

The coats were kind of an interesting exercise since I’ve never painted white uniforms before. I was trying to approximate the look of 18th century “wool”, so I first painted tan acrylic over the black, followed by white over the tan, taking care to leave some of the tan showing as shadow. Generally, I’m pretty happy with the effect, and the figures actually look better this morning than I thought they would!

The paints used for this work were Ceramcoat “tan” and an old bottle of Ral Partha “white” that I’ve had and used extensively for about ten years! That little bottle must be magic because it just refuses to dry up. I occasionally will add a few drops of water to the bottle, and it seems to work. The paint still flows nicely and has great coverage for a “white” – especially over a black undercoat!

At the far right of the photo, you’ll also see the company NCO, who has had his facings, turnbacks, breeches, and smallclothes completed with GW Warlock Purple. I also painted the silk bag attached to his bearskin with a couple of coats of GW Blood Red. I was eager to see just how everything would appear when complete and think the entire unit should look stunning when it’s finished.

So, this evening, I’ll paint the breeches for the rest of the company and staff. We’ll see how that goes.

Bluebear Jeff said…
Please give my best wishes to Grand Duchess Sonja with hopes for a quick recovery.

Der Alte Fritz said…
Ral Partha paints are now sold as Iron Wind Miniatures (or does the M stand for Metals?). You can still buy their white paint. For Austrians, I use their Light Grey as the shaded color and the Partha white as the highlight (I don't do the 3 color method, 2 are just fine). All this over a black undercoat.

Frank said…
A fine looking body of men indeed.
Press on sir, 'cos I can't wait to see them finished.