August 30, 2007
Well, despite the general business of the first two weeks of a new academic term and a slight head cold, I’ve managed to get all 80 of the 1/72 Revell Austrian grenadiers basecoated with Liquitex artists acrylic gesso and undercoated with Liquitex black acrylic paint. Both flex quite well, without any flaking or peeling when I bend muskets and officers' polearms without mercy. Exactly what we want! 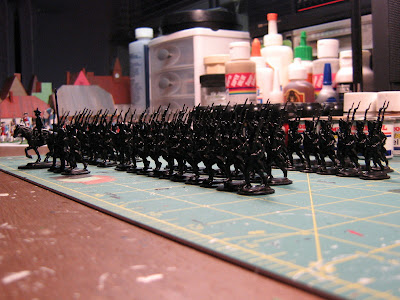 Besides a picture of the entire regiment, I’ve again included another of the English mercenary officer who commands this regiment – Colonel Augustus Finknottle (there are rumors afoot that suggest the ruler of Zichenau will shortly confer an honorary "von" prefix on Colonel Finknottle in return for certain favors he once provided to her). I’ve had a few nice comments from some of you on the bearing and demeanor of this fine figure. . . as are only befitting an English gentleman, you know. ;-) 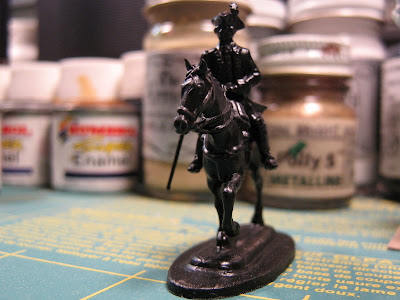 We have a three day weekend coming up here in the U.S.A. (The Labor Day Weekend -- traditionally seen as the end of Summer), so I plan to begin work on the first company (19) and regimental staff (4 -- mounted colonel, adjutant, standard bearer, and Regimental Sergeant Major). Hopefully, I can manage to complete the green bases, hands and faces, and white coats by Monday evening. Keep your fingers crossed!

May your paint flow easily to exactly where you want it . . . and to no place else!

Lucky you with the long weekend. We had one last weekend in the UK but no progress on my Prussians as I had to take the sash window out of my soldier room to strip and repaint it. Needless to say the job snowballed and it took me far longer than I anticipated. So my soldier room has been windowless for a week. Fortunately its on the fourth floor of my house so no chance of anyone breaking in. Thankfully we have also had no rain for all week. The bonus was that I had to unload a bookcase to get at the window. Hours happily spent flicking through stacks of magazines and books. On the OSW site they have been recently talking about the Hincliffe hobby binder and minifigs illustrated catalogue from the 1970's. Found my copies in this sort out. Small wonder I didn't finish the window job.

However I have about 5 or 6 completed regiments partially based on my desk and all I need is a few hours to complete them. Then I'm onto the Prussian Guard.

Snickering Corpses said…
Gussy Finknottle! Can we call the regiment the Newts?
11:12 AM

Snickering Corpses said…
See, this is what happens when you read posts from latest to earliest...I just saw your comment on an earlier post confirming the nickname of Newts. :>