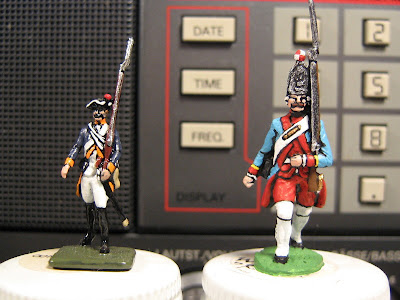 Here's a special photo for "Ron", who sent me a lovely e-mail early this morning in which he asked about how the Revell and RSM figures work together. So, here you go Ron!

On the left is one of my Revell 1/72 plastic Seven Years War figures (Prussian Infantry) . This figure belongs to Stollen's 2nd (Von Laurenz) Musketeers -- the first unit of figures I painted late last summer for my imaginary 18th century armies. He measures 25-26mm from his base to his eyes and 30-31mm at the top of the red pom-pom on his hat.

On the right is one of my RSM95 Prussian Grenadiers, painted as the stallwart and possibly now famous "Oberfeldwebel Klatschen" of Stollen's Leib (Grand Duchess Sonja's Own) Grenadiers. He measures 28-29 mm from base to eye and a towering 37mm from base to red and white pom-pom!

So, you see that the two figures would not work grouped together within the same unit. However, on the table in separate BIG battalions of 60+ figures, they will do just fine. I expect that any slight differences in individual size will not be glaringly apparent when the armies are laid out in battle array on my planned table.

When I was a boy and played with a variety of green plastic WWII and Vietnam-era soldiers, tanks, and guns, slight differences in height and proportion didn't bother me. Plus I had some comparatively HUGE tin soldiers that had been my father's in the 1940s, and they were part of the proceedings too. I'm taking a similar approach this time.

And remember, if you look closely at the pictures that adorn Young and Lawford's Charge!, you'll notice that the Stadden, Willie, and Tradition figures are rather larger than the Spencer Smiths. But they used all of these figures together quite happily. Each of my figures above are very different, but I love them both!

Hope this answers your questions about these two ranges. Please drop me a line again if you have any othe questions. Enjoy!